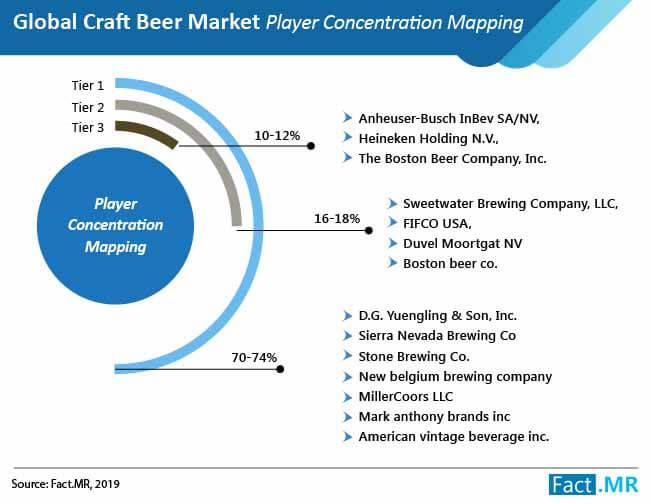 The craft beer has become quite popular since the last decade, and prominent companies have already increased their regional presence to increase their market share in the global craft beer market. Fact.MR reveals that the global craft beer market is likely to reach peak maturity levels, and is expected to grow at a healthy CAGR of 7% in the forecast period. This notable growth is mainly influenced by the dominance of small and independent brewers, which will significantly increase during the forecast period.Get detailed COVID-19 impact analysis on theCraft Beer Market: https://www.factmr.com/report/181/craft-beer-marketFact.MR also found that increasing consumer demand for premium and flavored craft beer is fueling the growth of the craft beer market through 2029. Increasing consumer inclination towards craft beer products combined with exceptional taste is expected to increase in the upcoming future.Craft brewers are already introducing craft beer in various flavors, and are focused on using advanced technology for malt ingredient production which is expected to create lucrative opportunities for the global craft beer market.Click Here To get a Sample (Including Full TOC, Table & Figures) https://www.factmr.com/connectus/sample?flag=S&rep_id=181A new study conducted by Fact.MR also finds that, globally, fruit additive based and unfermented craft beer have significant demand. Moreover, among various products, pale ales account for more than 25% demand in the total craft beer market. It has also been seen that more than 67% of consumers prefer to drink craft beer through independent regional craft brewing companies. The number of craft breweries in the US is increasing tremendously, mainly in California, Florida, Colorado, North Carolina, New York, Oregon, and Pennsylvania.Need more information about Report Methodology? Click here https://www.factmr.com/connectus/sample?flag=RM&rep_id=181The quality of raw materials such as wheat, barley, and maize is a crucial factor for craft beer production. Barley and wheat offer various benefits, and produce is not restricted to a particular type or grade, and both species are known to adapt to a range of climatic conditions. Hence, the easy availability of quality raw material is also creating lucrative opportunities for the craft beer market at the global level. An increasing number of lounges and bars is also influencing the craft beer market to a great extent. Furthermore, according to the brewer’s association, the new brewpub opening has been significantly increased since the last four years in various regions.The Fact.MR study also envisages that the craft beer market experiences intense competition from the local and domestic level layers, and is highly fragmented. Majority of the market is dominated by microbreweries, brewpubs, and regional craft breweries. International players are starving to increase their market share in the craft beer market by introducing new products with versatile packaging to attract consumers. Top companies mainly prefer to offer their products by online retailers, liquor store and brick & mortar stores. Additionally, the rapidly increasing travel and leisure industry is pushing the craft beer market on account of the fact that customers like to consume their favorite drinks on-the-go.Connect To an Expert https://www.factmr.com/connectus/sample?flag=AE&rep_id=181North America has dominated the craft beer market, owing to the increasing number of breweries mainly in United States. It is reported by the brewer’s association that there has been an increase of 12.9% in the number of breweries in 2018 than that of 2017 in the United States itself. Canada has also shown nearly similar growth in the number of breweries in the recent period.Europe is an emerging region in the craft beer market which is anticipated to show noteworthy growth over the forecast period. People in countries such as UK, Portugal, Spain, Belgium, Greece, Norway, and Sweden are preferring bars, breweries, and restaurants to socialize over a mug of craft beer. Over the next four years in Europe, many breweries will end up finding differentiated offerings in their products with clear and unique value propositions, to gain a competitive edge over other breweries.Content Source: https://www.factmr.com/media-release/1079/global-craft-beer-marketContact: US Sales Office: 11140 Rockville Pike Suite 400 Rockville, MD 20852 United States Tel: +1 (628) 251-1583Corporate Headquarter:Unit No: AU-01-H Gold Tower (AU), Plot No: JLT-PH1-I3A, Jumeirah Lakes Towers, Dubai, United Arab Emirates Email: sales@factmr.comAbout Fact.MR:Market research and consulting agency with a difference! That’s why 80% of Fortune 1,000 companies trust us for making their most critical decisions. While our experienced consultants employ the latest technologies to extract hard-to-find insights, we believe our USP is the trust clients have on our expertise. Spanning a wide range – from automotive & industry 4.0 to healthcare & retail, our coverage is expansive, but we ensure even the most niche categories are analyzed. Our sales offices in United States and Dublin, Ireland. Headquarter based in Dubai, UAE. Reach out to us with your goals, and we’ll be an able research partner.

04-18-2021 | Business, Economy, Finances, B …
Fact.MR
Increasing use of gallium nitride in military and aerospace industry, fuelled gl …
Gallium nitride is a glass-like substance that is translucent. It can be used with broader bandwidth and tough structure as a semiconductor unit. Compared to the semiconductor form of silicon, it tends to lose less energy. Gallium nitride use is growing with the growth of wireless devices. The gadgets based on gallium nitride have numerous applications, from electronics to telecommunications and automotive. The wider bandwidth means that energy is quickly transferred
04-18-2021 | Business, Economy, Finances, B …
Fact.MR
Demand for anti-friction coatings is highest in transportation industry. Asia Pa …
Anti-Friction Coatings Market: Overview and Dynamics Anti-Friction coatings are a type of lubricant solution that are similar in formulation to common industrial paints. It comprises of solid lubricants and resins as solvents. The main components of solid lubricants are molybdenum disulphide, Polytetrafluoroethylene (PTFE) and graphite. The most preferred way of applying anti-friction coatings is immersion or by spraying carefully onto the degreased surfaces. There are other methods as well like electrostatic
04-17-2021 | Advertising, Media Consulting, …
Fact.MR
Automotive Lighting Market to Grow at CAGR of 5 % through 2030 to reach a valuat …
The global automotive lighting market is projected to grow at 5% and will be valued at US$ 65 Bn by the end of the forecast period (2020-2030). However, the COVID-19 crisis has impacted the growth trajectory as the demand for automotives has fallen sharply. In the wake of disruption of supply chains and the shutdown of manufacturing plants, the automotive lighting market growth has been profoundly affected. To get in-depth
04-17-2021 | Advertising, Media Consulting, …
Fact.MR
Polyamines Market Trends and Analysis (2020-2030): Key Market Dynamics and Growt …
Polyamines market is poised to surpass US$ 200 Mn by 2020 and is set to grow at a steady 4% during the forecast period (2020-2030). Polyamines is a key water treatment chemical and coagulant used for treatment of discharged waste water. Though coagulants constitute a major share of the market, shale inhibitors are growing at a faster rate owing to their high demand in oil & gas well explorations. To get

07-30-2020 | Leisure, Entertainment, Miscel …
Sealegs International Ltd.
Sealegs Ships 1500th Amphibious Craft
Sealegs International announced it has shipped its 1500th amphibious boat. The shipment was to British adventurer Bear Grylls, making it the third Sealegs boat Bear Grylls has purchased. The delivery was celebrated by Sealegs, further securing its position as the largest amphibious boat company in the world. Sealegs pioneered the amphibious production boat market. Over the last 15 years it has grown from nothing to what is now a significant and
02-25-2019 | Advertising, Media Consulting, …
QandQ Market Research
Craft Cider Market
https://www.qandqmarketresearch.com/reports/7174150/craft-cider-market-21 This report studies the global market size of Craft Cider in key regions like North America, Europe, Asia Pacific, Central & South America and Middle East & Africa, focuses on the consumption of Craft Cider in these regions. This research report categorizes the global Craft Cider market by players/brands, region, type and application. This report also studies the global market status, competition landscape, market share, growth rate, future trends, market drivers,
02-08-2019 | Advertising, Media Consulting, …
QandQ Market Research
Craft Soda Market
https://www.qandqmarketresearch.com/reports/7496531/craft-soda-market-7 The global Craft Soda market is valued at million US$ in 2018 and will reach million US$ by the end of 2025, growing at a CAGR of during 20192025. The objectives of this study are to define, segment, and project the size of the Craft Soda market based on company, product type, end user and key regions. https://www.qandqmarketresearch.com/reports/7496531/craft-soda-market-7 This report studies the global market size of Craft Soda in key regions like
08-09-2018 | Business, Economy, Finances, B …
Amphibious Landing Craft Market Report 2018
Amphibious Landing Craft Market Report 2018: Segmentation by Type (LCAC (Landing …
Global Amphibious Landing Craft market research report provides company profile for Abu Dhabi Shipbuilding, Garden Reach Shipbuilders and Engineers, Goa Shipyard, General Dynamics NASSCO, Griffin Hoverwork, L-3 Unidyne, Marine Alutech, Almaz and Others. This market study includes data about consumer perspective, comprehensive analysis, statistics, market share, company performances (Stocks), historical analysis 2012 to 2017, market forecast 2018 to 2025 in terms of volume, revenue, YOY growth rate, and CAGR for
06-04-2018 | Business, Economy, Finances, B …
Gulf Craft
Gulf Craft Strengthens Their Team for Growth
Gulf Craft has appointed Gregory Yeakle to be their new Chief Executive Officer. One of the world’s largest luxury ship builders, Gulf Craft is based in the United Arab Emirates. The group has grown into a leading global business over the course of the past 37 years. He succeeds Erwin Bamps who held the position for the past 4 years and has now moved on to a new role as
03-21-2018 | Business, Economy, Finances, B …
QyResearchReports
Craft Beer Market : Cheap Points of Tasty Craft
Qyresearchreports include new market research report “Global Craft Beer Sales Market Report 2017” to its huge collection of research reports. Global Craft Beer market competition by top manufacturers/players, with Craft Beer sales volume, Price (USD/MT), revenue (Million USD) and market share for each manufacturer/player; the top players including D.G. Yuengling and Son The Boston Beer Company The Gambrinus Company Lagunitas Brewing Company Sierra Nevada Brewing Co. New Belgium Brewing Company Bell’s Brewery, Inc Deschutes Brewery Minhas Brewery Stone Brewing Chimay Beers And
Comments about openPR
OpenPR ist the nicest and most clearly laid out PR platform I have seen to this day. The press releases are displayed very nicely and clearly and without any unnecessary frills. The updates are fast and the finished release looks appealing and is clearly legible. Even with 16 years of experience one discovers new things from time to time. Congratulations!
Gabriele Ketterl, Director Marketing & PR, Menads