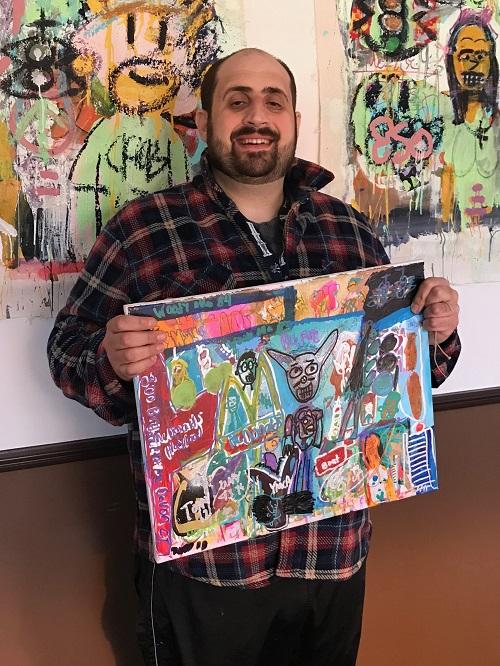 Internationally collected and acclaimed artist Vito Bonanno taps into the daily emotional and social challenges of living with autism, placing his innermost feelings onto canvas. The New England-based artists’ work is image and concept driven and imbedded in his personal philosophy. His art contains the essence of his life, feelings, thoughts and dreams, coupled around objects or topics that “get stuck in his head”, including traffic lights, grids, ceiling fans, graffiti and pop culture. Corporate clients include AMAZON, The Hartford NC, CBRE Nashville and City Block.The artist was recently featured in 'Of Beauty and Chaos', at Six Summit Gallery, located at 314 Flat Rock Place in Westbrook, Connecticut 06498. The exhibition ran through March 2021, many of the works have sold, please contact the gallery for current availability and pricing. Six Summit Gallery offers 7000 SF of social distancing space in 2 connected galleries with an incredible selection of art; they also have a location in Times Square, NYC.Bonanno is an award-winning, world famous artist. He unveiled his first Solo Exhibition, 'Unfiltered V: Vito Bonanno Riding with the Train Girls', in January 2012 at Akus Gallery at Eastern CT State University which included works on paper, canvas, video pieces, a student-artist interactive mural project and installations. Akus Gallery Director, Elizabeth Peterson stated, “The characters, objects and ideas that inhabit Vito Bonanno’s work act and interact in striking ways. Caught within the grids and map-like structures he imagines, they are often in a struggle between multiple worlds. He has found a way to tap in the intensity of focus and insight afforded him through autism to unleash a formidable creative power and vision.”He is one of only 16 artists in the United States selected for a prestigious exhibition of previous awardees from the VSA Emerging Artists Program in the Kennedy Center Hall of Nations with sponsorship from Volkswagen Group of America. As part of the celebrations for the 25th Anniversary of the ADA and 40th Anniversary of VSA in 2015, the exhibition included the work of select artists who represented the past 13 years of the VSA Emerging Young Artist Program; Curated by Stephanie Moore, she chose Bonanno's ‘Daffy Goes to Waterbury with a Ninja Turtle’ and ‘SECR Toilet’ to be part of the exhibition.Bonanno was diagnosed with PDD/Autism just before his 4th birthday. Because he was language delayed, his parents and teachers developed strategies that tapped into his high visual acuity, utilizing storyboard styles to relay academic and social information. He was also encouraged to draw in storyboard format to express his feelings. The storyboard grid remains prominent in his work and studio preparation today and is a poignant reminder of a boy who was trapped in his own mind. His unique view of the world provides a seemingly endless well of inspiration that fills his head with images and concepts until they spill over onto the canvas, bursting in vibrant colors and hard-to-ignore imagery that can harbor obvious, but often secret messages.Current and ongoing, Vito continues to work with various artist facilitators in his studio in Old Saybrook, CT expanding his knowledge of materials and techniques and further developing his creative vision. For more information about this artist, for inquiries or to commission a piece contact vito@vitobonanno.com / visit http://www.vitobonanno.com/Miami Art Scene 111 SW 3rd Street, Penthouse Miami, Florida 33130Covering the visual arts in Miami and South Florida, as well as national and international art news and information. Reporting on the local art scene and the worldwide community of visual arts, artists, creative organizations, personalities, trends and events.