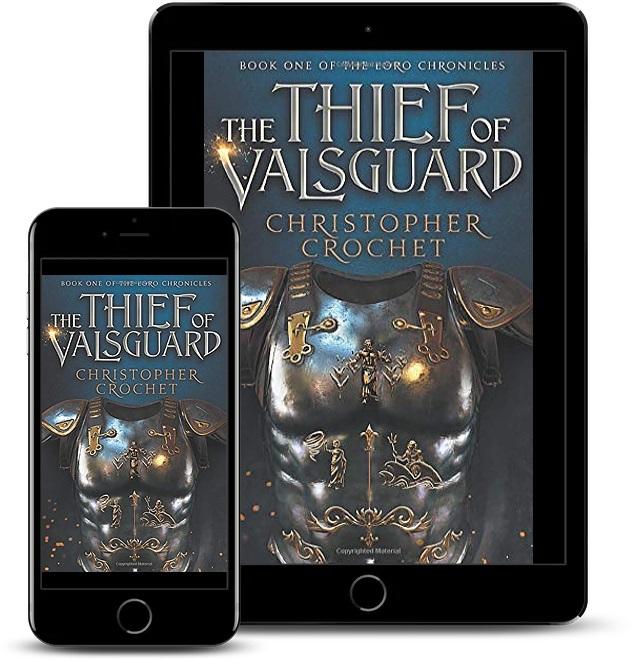 Author Christopher Crochet Promotes His Epic Fantasy - The Thief of ValsguardAuthor Christopher Crochet is pleased to announce the promotion of his epic fantasy. The Thief of Valsguard. This is book one in The Loro Chronicles series. Other books in the series include the prequel short story, The Death of a Dragon and book two, The Deceiver.The legendary Greys are back, and villages are burning with no one to stand in their way. An unlikely band of friends might have the only tools to challenge them.As an orphaned outsider, Damien has worked his entire life to earn a place in the modest kingdom of Lakefall. His hard work does not go unnoticed by King Simeon who has always had bigger plans in mind for the young soldier.Rowan left his old life years ago to settle down for a quiet life with his wife and daughter. The retired hero is thrust back into action against his will but discovers he may have missed being called the Dragonslayer by the citizens of Westland City. As his legend continues, he must confront the deeper layers of his secret ability.Russam has completed a fifteen-year scavenger hunt to find a map that his father gave him directions to on his death bed. When he finds more than he can handle, he’s sent on another search for the famed Dragonslayer, Rowan Everleigh.Isabella has always dreamed of moving to Westland City and attending the university. When she learns her parents have hidden her father’s famed past from her, it changes everything. She soon finds herself on an adventure armed with a secret of her own.When the four of them are put together, they soon realize that it is more than just coincidence. Gods, wizards, and ancient bedtime stories will all have a hand in the outcome of this epic fantasy adventure.The Thief of Valsguard is available for purchase in print and ebook formats. Book Information: The Thief of Valsguard The Loro Chronicles, Book 1 By Christopher Crochet Published: March 2020 ISBN: 979-8614093624 (pb) ISBN: 978-1393667865 (ebook) ASIN: B0855N4NF1 Pages: 340 Genre: Epic FantasyAbout the Author: Christopher Crochet is the author of The Loro Chronicles. He is a thirty-four year old MRI technologist. Christopher lives in Baton Rouge, Louisiana with his wife and two daughters. Contact: Twitter: https://twitter.com/chriscro12 Facebook: https://www.facebook.com/Christopher-Crochet-110001947793544 GoodReads: https://www.goodreads.com/author/show/20073444.Christopher_Crochet Promo Link: http://bookbuzz.net/blog/epic-fantasy-the-thief-of-valsguard-by-christopher-crochet/Purchase Links: https://www.amazon.com/gp/product/B0855N4NF1 https://www.barnesandnoble.com/w/the-thief-of-valsguard-christopher-crochet/1138653808?ean=2940165204067 https://www.kobo.com/us/en/ebook/the-thief-of-valsguard https://books.apple.com/us/book/the-thief-of-valsguard/id1549978007#fantasy #epicfantasy # ChristopherCrochet # LoroChronicles #BookBuzzBookBuzz.net 59 Heritage Way Drive Rome, GA 30165Website: http://bookbuzz.net/blog/epic-fantasy-the-thief-of-valsguard-by-christopher-crochet/PR by BookBuzz.net BookBuzz.net helps indie authors, hybrid authors, and small publishers promote and market their books. We also help with book reviews, publicity, and more. Let's Create Some Buzz For Your Book!!!

03-22-2017 | Arts & Culture
Adelphi University
Theaterworks USA’s The Lightning Thief at Adelphi University on April 2 at 3:0 …
Rick Riordan’s popular novel The Lightning Thief is now an exciting musical! The Lightning Thief will be performed on Sunday, April 2 at 3:00 p.m. on the Westermann Stage, Concert Hall in the Adelphi University Performing Arts Center (AUPAC), 1 South Ave, Garden City, New York. This production is recommended for children in grade 3 and up. Rick Riordan’s The Lightning Thief tells the story of Percy Jackson, a misfit
04-08-2011 | Industry, Real Estate & Constr …
Digi-Key Corporation
Digi-Key Drops Printed Catalog and Redefines itself as The Leading Totally Integ …
Virtually everywhere, Digi-Key addresses today’s toughest product-development challenges THIEF RIVER FALLS, Minnesota, USA – In an unprecedented industry move, Digi-Key Corporation, a global electronics component distributor, recently announced that it will immediately cease all print versions of its product catalog and TechZone™ Magazine, offering this content exclusively online. This all-digital decision, driven by the company’s efforts to be environmentally vigilant, marks a major milestone in Digi-Key’s transition into a totally integrated
03-22-2011 | Industry, Real Estate & Constr …
Digi-Key Corporation
Digi-Key Corporation Achieves $1.5 Billion Sales Milestone
THIEF RIVER FALLS, Minn., USA – Electronic components distributor Digi-Key Corporation surpassed $1.5 billion in global sales for the first time in 2010, generating a half-billion dollars in the fourth quarter alone. The record-setting total represents a 64 percent year-over-year sales increase for the electronic components distributor. Design engineers, equipment manufacturers, innovators and hobbyists rely on Digi-Key for both prototype/design and production quantities of electronic components. Digi-Key offers more than 1.8
11-04-2009 | IT, New Media & Software
ITAgents interactive software solutions
Catch mobile phone thieves with GPS – the new Theft Aware software for Nokia s …
Linz, 4 November 2009 - Mobile phone theft on the street: who does not dream of tracking down brazen thieves along with the booty? A new software from ITAgents, for Nokia smartphones makes this possible. Theft Aware is unique because it is the only anti-theft protection for mobile phones which remains completely invisible to the thief while the victim is provided with access to his mobile phone per SMS. It
08-19-2008 | Health & Medicine
BiCOM Inc.
Silent Thief Of Sight Attacks NY Governor Paterson
Glaucoma does not discriminate. Everyone should be screened for glaucoma. Elevated intraocular pressure (eye pressure or IOP) is the major risk factor for glaucoma. Early screening and detection may prevent blindness. New unique device Tonometer Diaton is the only device on the market that measures intraocular pressure painlessly through the Eyelid over the sclera vs. direct contact with the cornea. Methodology details at http://www.TonometerDiaton.com. 60 million Americans are at risk
12-18-2006 | IT, New Media & Software
SybianGuru
Secure Your Mobile and all Data on it with Phone Guardian for Series 60 3
Phone Guardian is a security anti thief and auto lock application for Series 60.3 Symbian smartphones which protects your phone and secures the data on it. Phone Guardian is a must for a Series 60 3rd edition phone because: - It secures the mobile and all data on it by locking the smartphone on SIM change and on secure SMS - It provides all possible information to find the thief and get the
Comments about openPR
9 o'clock: discuss press release with client, 10 o'clock: submit release to openPR, within the briefest possible time release is published and displayed in a prominent place on openPR.de. I am thrilled!
Zehra Spindler, Calypso Now! - Communication Agency