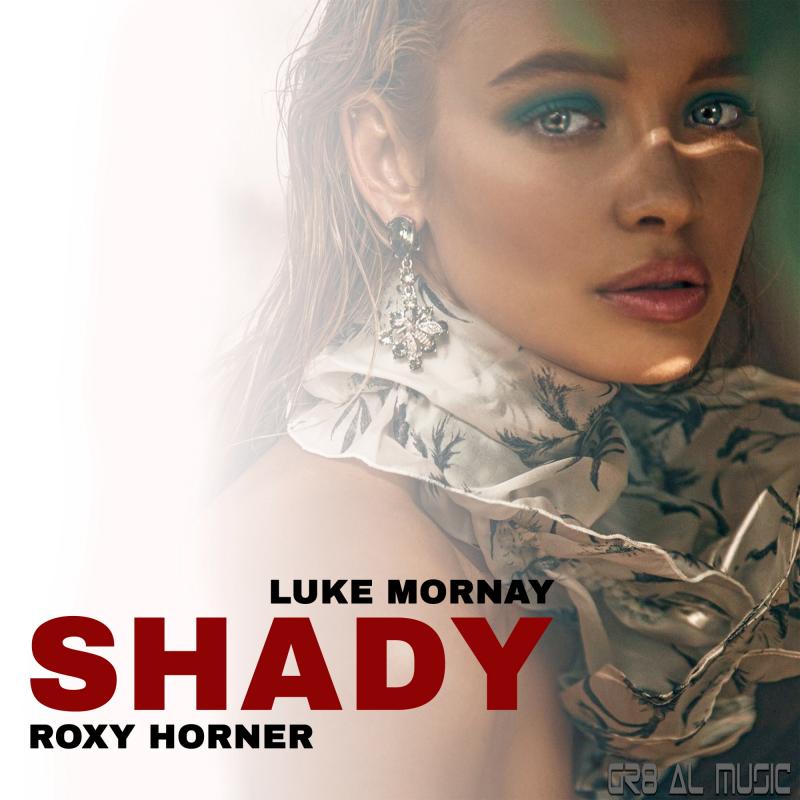 It fills me with pride to work with such a excellent musician and celebrity, says GR8 AL Music Management. Topmodel, Singer-Songwriter Roxy Horner & Grammy nominated Luke Mornay release their new music Video and Single "SHADY". The Song is taken from the current music album Twenty Five Ten by Luke Mornay and a great cooperation by outstanding talents !The energetic dance track SHADY contains melodic house mixes by the very known duo AL-Faris & Superfinger.As a top model and singer /songwriter, Roxy naturally attracts the attention of other celebrities. In her late teens, she dated the international pop star Taio Cruz for two years. She has also worked with the likes of Duran Duran on their supermodel Girl Panic video. Roxy featured in the video along side of some of the top international super models Naomi Campbell, Helena Christensen, Cindy Crawford and Eva Herzigova. She has also rubbed shoulders with Dizzee Rascal and will.i.am in the video Something Really Bad. More recently, the world press have linked her in a relationship with Leonard DiCaprio. She also shot the beauty campaign for MARY KAY and featured in two cinema released films last year “Bone in the Throat” and also the “Man from Uncle”. Roxy also appears in a short film created by BAFTA award winning Walter Campbell and one of the most successful fashion and portrait photographers Rankin for their movie “X MARKS THE SPOT” along shooting the campaign for the brand Coco De Mer shot by Rankin.Luke Mornay : “I spent years meeting people’s expectations; the time felt right for me to try and meet my own. Going independent to produce this debut album has already fulfilled some of my dreams. I could go back to the roots of what got me into music in the first place, and channel such influences as Supertramp, Earth, Wind & Fire, Ray Parker Jr, Depeche Mode, 10cc, Chic… the 80s in general.“I see my album as a newborn child – it’s the starting point. This feels like parenting; hoping for the best for your kids, guiding them through life and the choices we all have to make. You can’t please everyone all the time, and I guess what’s great is that that’s not really the point?“Life is also all about the company we keep along the way. So it felt natural to invite guest artists such as Kevin Godley from 10cc and James Atkin from EMF, as well as friends made over time such as Lucy Pullin (Craig Armstrong, Robbie Williams, Goldfrapp), Rachael Atkin (Fluke, Beauty School Drop Outs), PJ Hawn, Melanie Taylor, Nick Tart (Diamond Head), Roxy Horner and Flora. I’m really proud of all our collaborations and so grateful for their generosity and support. It doesn’t end there – stay tuned for some more surprise appearances on an upcoming deluxe version of Twenty Five Ten…“Besides my emotional motivation to complete this album, I really wanted it to serve as a bridge between genres, eras and generations. To somehow connect the dots between timelines in a unified story, with all those joyful and crazy moments, different directions and contradictions juxtaposed. Or more simply put: to tell my story.”Luke Mornay feat. Roxy Horner - Shady (Video) https://youtu.be/2yrLL1wI3wE Luke Mornay feat. Roxy Horner - Shady (Shop Link) https://lukemornayroxyhorner.fanlink.to/shady Luke Mornay - Twenty Five Ten (Album Shop Link) https://lukemornay.fanlink.to/twentyfivetenGR8 AL Music Ockstädter Strasse 21a 61169 Friedberg / Germany info@playclubmusic.comGR8 AL Music Management founded in 2010. Stylistically we are covering the genres of vocal, soulful, electro house, dance, techno, trance, smooth downbeat, lounge and selected rock/pop productions. Located in the area of Frankfurt am Main / Germany.

08-22-2017 | Advertising, Media Consulting, …
Market Research Reports 2017
Water Soluble Food Colors Market Forecasts to 2017-2022 JAGSON GROUP, Roxy & Ric …
Global Water Soluble Food Colors Market Research Report Recently published a detailed market study on the "Water Soluble Food Colors Market" across the global, regional and country level. The report on the global Water Soluble Food Colors market uses the top-down and bottom-up approaches to define, analyze, and describe the market trends for the next five years. The Water Soluble Food Colors market report further provides production, capacity, Water Soluble Food
07-06-2017 | Advertising, Media Consulting, …
Global Market Research
Global and China Snowboard Bindings Market 2017 Top Players - Atomic Skis, Nidec …
This report studies Snowboard Bindings in Global market, especially in North America, China, Europe, Southeast Asia, Japan and India, with production, revenue, consumption, import and export in these regions, from 2012 to 2016, and forecast to 2022. To begin with, the report defines the Snowboard Bindings market and segments it based on the most important dynamics, such as applications, geographical/regional markets, and competitive scenario. Macroeconomic and microeconomic factors environments that currently
03-07-2017 | Industry, Real Estate & Constr …
MRS Consumer Goods Market
Global Spectacles Market 2017 Natkiel, Ray-Ban, OAKLEY, Roxy Eyewear, CHEAP MOND …
MRS Research Group adds“Global Spectacles Market 2017 Share,Size,Trends and Forecast to 2022 Market Research Report”reports to its database.This report provides a strategic analysis of the Spectacles market and the growth estimates for the forecasted period. The market research analyst projects the global Spectacles market to grow at a considerable CAGR,in terms of revenue,over the forecast period.The report will provide the client with market insights and in-depth analysis of multiple market segments
09-22-2016 | Leisure, Entertainment, Miscel …
ipop[1]
iPOP! Alumni Jake Short Lands Role in Upcoming Comedy Film #Roxy
(Los Angeles, September 20, 2016) Jake Short is an actor most known for Disney’s A.N.T. Farm, Mighty Med, and will be starring in the upcoming comedy film #Roxy which hits theaters in Spring 2017. The synopsis of the movie is about a hacker named Cyrus (Short) who helps a star athlete fall in love with his best friend Roxy, whom Cyrus is also in love with. Jake Short was born in
10-18-2007 | Tourism, Cars, Traffic
Europa-Sportregion Zell am See-Kaprun
Mellow Park: on 14th December the Roxy Chicken Jam kicks off in Zell am See-Kapr …
There definitely is some reason for the best female snowboarders to wear a broad smile on their faces when they explain unanimously, 'We are really looking forward to coming back here!' Jamie Anderson from the USA said, 'It's an awesome snow park and the people here are just great.' And Jenny Jones from Great Britain agreed that in Kaprun she and her colleagues 'can really show what we got.' Her
09-17-2007 | Leisure, Entertainment, Miscel …
MLC PR for Kim Kline Music
KIM KLINE SET TO PERFORM AT THE ROXY THEATRE
Hollywood, CA (September 16, 2007)— Diva of rock, Kim Kline, who has been nominated in two categories for the Los Angeles Music Awards: “Best Female Vocalist 2007” and “Best Independent Music Video 2007” will be playing at the famous Roxy Theatre on September 22, 2007. Kim Kline’s debut single, “Inside,” is currently impacting radio nationwide. Among airplay on over 70 radio stations, she’s the only independent artist that has
Comments about openPR
OpenPR ist the nicest and most clearly laid out PR platform I have seen to this day. The press releases are displayed very nicely and clearly and without any unnecessary frills. The updates are fast and the finished release looks appealing and is clearly legible. Even with 16 years of experience one discovers new things from time to time. Congratulations!
Gabriele Ketterl, Director Marketing & PR, Menads