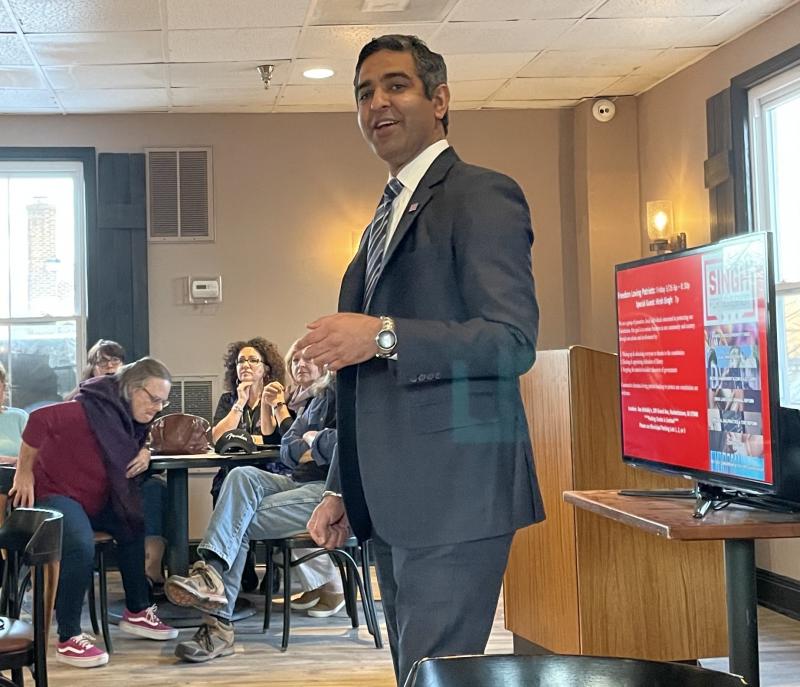 Hackettstown, New Jersey (..) March 26, 2021 –With New Jersey being one of only two States in the US holding a Gubernatorial race this year, the Republican field of candidates has narrowed to just a handful of contenders. On Friday March 26, 2021, Gubernatorial Candidate Hirsh Singh spoke to a group of citizens in a town hall format at Bea McNally’s in Hackettstown New Jersey. “They didn’t shut down Home Depot, they didn’t shut down big business, we are going to open up our State.”, Singh asserted as he described the response his administration would have to the continuing Covid-19 pandemic. “We haven’t even seen the impact of this shutdown yet” the candidate warned, describing the state of the economy on both local and national levels. Singh, born in Atlantic City and earning his engineering degree from NJIT in Newark, ran a successful high tech business in the defense and aerospace industry prior to running for public office. Issues ranging from economic recovery, election integrity and free speech were on the agenda for the Friday evening talk. “We need body cams on each of these election workers” Singh stated regarding election integrity to the resounding applause from more than 80 New Jersey voters in attendance. Big tech censorship and a message of demanding greater transparency through “punitive damages” of social media firms to stop the suppression of free speech further differentiated the candidate from his opponents. “I’m a single issue second amendment voter, what will you do to support my rights?” asked one attendee to which Singh responded that he is firmly in support of the Second Amendment which he sees as the ultimate protection for citizens to defend themselves and their families. Singh reiterated the importance of hitting financial targets to force a sanctioned debate of Republican candidates leading up to the June primary, explaining that fundraising thresholds are used to determine if a debate will be held and asked the audience that if they shared the same beliefs, donate at www.hirshsingh.com with any amount, “If you donate $1, at least I know I’ve got your vote” Hirsh stated as he wrapped up his talk.“We really need to drive change locally, in our own communities, there is no-one flying in to save us.”, commented Donna Appel, owner of Soups on Main in Hackettstown and founder of the grass roots group “Freedom Loving Patriots”, during her opening address. The importance of getting engaged in local government as a means to effect positive change was a common theme from all who presented during the meeting which drew residents from various counties of the State. The Town Hall was held during the Freedom Loving Patriots group’s weekly meeting which normally covers local issues and the impact of current legislation moving through the State Assembly. “You can’t just sit on the couch and share memes and think you have done your part, you have to learn about what is going on in your own backyard and get involved” said one attendee when asked why she has been attending political meetings on Friday nights at a soup store in Hackettstown. The Town Hall meeting was one of many events regularly held by the group which also hosts “Constitution Alive” on Thursday evenings with a purpose of educating people on the meaning and value of the Nation’s founding principles using videos, lecture and open discussion. “Educating ourselves and others” being one of the pillars within the group’s purpose statement, Thursday afternoons hosts “History of America” for children and youth at Soups on Main, 199 Main Street, Hackettstown, with a focus on civics and good citizenship in a fun and interactive format. The group also hosts a Tuesday evening video series titled “Wake up America” where various topics are explored and attendees can freely discuss the impact on our Nation and local community.Freedom Loving Patriots 199 Main Street HACKETTSTOWN, New Jersey 07840 Freedomlovingpatriots@protonmail.comFreedom Loving Patriots is a Grass Roots Organization which has grown from a few engaged citizens discussing current events to an organization comprised of New Jersey residents from all corners of the State. The mission of the organization is to identify and help elect or appoint defenders of liberty, educating themselves and others while impeding the communist and socialist encroachment into our schools and society.Attendees of the Freedom Loving Patriots meetings come from all walks of life and celebrate a diversity of ideas and open debate. The group sees peaceful and lawful political engagement and activism as the only means to turn the course of what is recognized as the dangerous trend of cancel culture and dismantling of our most cherished rights and values. To learn more about participation and becoming active please contact freedomlovingpatriots@protonmail.comFor additional information on the news that is the subject of this release contact Communications Director at freedomlovingpatriots@protonmail.com

05-03-2021 | Politics, Law & Society
Freedom Loving Patriots
Gubernatorial Candidate Jack Ciattarelli Comes To Hackettstown
New Jersey Gubernatorial Candidate Jack Ciattarelli to Hold Town Hall Meeting with Local Grass Roots Group. Hackettstown, New Jersey (..) May 2, 2021 As primary campaigns heat up in New Jersey, candidates for the Republican Party nomination are out meeting with voters in hopes of capturing the nomination. With the Primary Election on June 8, 2021, New Jersey Republicans have four candidates to choose from to take on Governor Murphy in

05-20-2021 | Business, Economy, Finances, B …
IWS FinTech
IWS FinTech Welcomes Mario Singh as Board Advisor
Singapore (20 May 2021) – IWS FinTech, a fast growing start up focused on developing disruptive technologies such as blockchain and fintech, recently welcomed global financial expert and Fullerton Markets CEO, Mario Singh, to its Board of Advisors. With years of experience as an established entrepreneur, Mario is no stranger to growing and scaling companies fast. He will leverage his deep industry connections and experience in the finance and
06-15-2020 | Advertising, Media Consulting, …
MC Willard Brown
Rahul Singh MC Willard Brown Director of Marketing
Rahul Singh Thakur from MC Willard Brown is rated among the Top 100 most Influential Global Marketing Leaders of 2018 & 2019 by World Marketing Congress and CMO Asia. A Marketing professional with over 15 years of work experience in BtoC, BtoB & BtoG marketing practice within the Brand Marketing, Digital Marketing and Analytics space. Rahul has worked with over 112 brands to date in various capacities. He has helped prominent
04-28-2020 | Sports
Communications Inc
RP Singh Invests In Sports Tech Company SportsUno
Nasscom Incubated Sports Tech Company To Spearhead Digitisation Of Sports & Fitness Industry Enables Fitness Centres & Health Instructors To Conduct Smooth Online Exercise Sessions Amidst Lockdown SportsUno, a premium sports Technology Company that provides technological hand-holding to sports businesses in India, has brought in former cricketer Rudra Pratap Singh (RP Singh) on board. Being one of the very few chosen sports tech companies selected by NASSCOM, this move is aimed
11-16-2016 | Media & Telecommunications
FridayMoviez
KJo Grts Ranveer Singh and Ranbir Kapoor On A Couch!
We all know that Karan Johar is back on Television with the fifth season of his famous chat show 'Koffee With Karan.' Viewers love to watch this show as they get to know much more about their favourite stars. And this time it is more personal as Karan will enter in a personal conversation with the actors. Shah Rukh Khan and Alia Bhatt graced the couch as they appeared in
01-14-2012 | Business, Economy, Finances, B …
Jai Arjun Singh to Speak At OMCAR 2012
Jai Arjun Singh to Speak At OMCAR 2012
OMCAR 2012, about to be held on 13th January 2012 at New Delhi will see coming together of some of the biggest names from the online marketing industry and brands from various niches. Different brands addressing at OMCAR 2012 will talk about their successes and failures with social media! One amongst the speakers is Jai Arjun Singh, freelance writer and journalist. Jai Arjun Singh is a freelance writer and journalist and
12-10-2010 | Industry, Real Estate & Constr …
Investors Clinic
Investors Clinic signs Yuvraj Singh as Brand Ambassador
New Delhi, December 10, 2010 – Investors Clinic, the pioneer amongst professional real estate consultancies in India has announced that it has signed Yuvraj Singh, one of India’s most prolific cricketers from amongst the current national team, as its brand ambassador. Though it is common for real estate developers to sign Indian Cricketers as their brand ambassadors, this is for the first time ever in the Indian real estate industry
Comments about openPR
9 o'clock: discuss press release with client, 10 o'clock: submit release to openPR, within the briefest possible time release is published and displayed in a prominent place on openPR.de. I am thrilled!
Zehra Spindler, Calypso Now! - Communication Agency