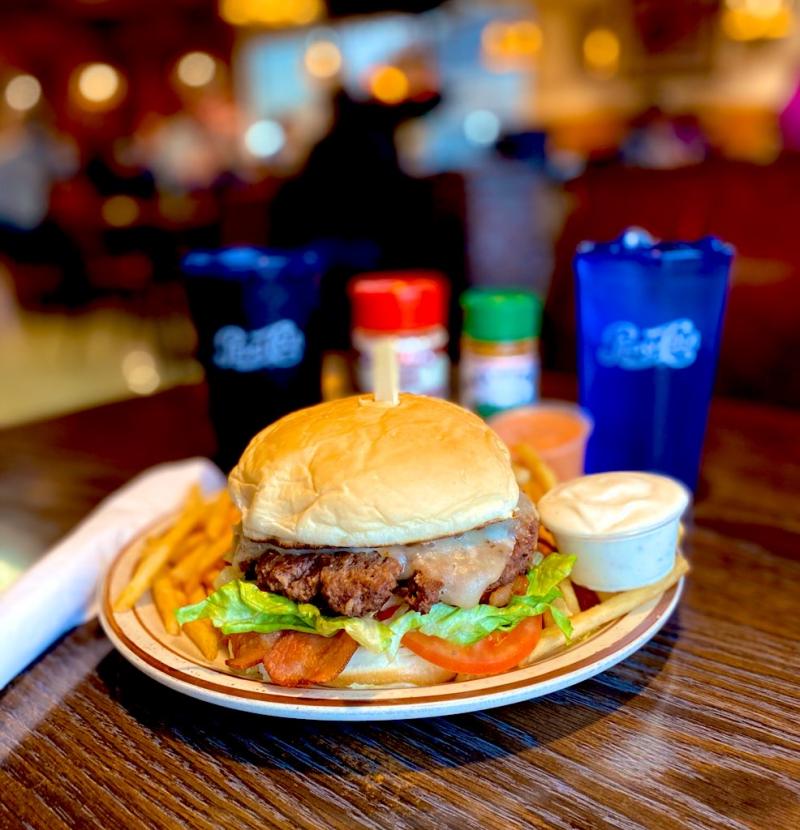 Jean's is legendary for their burgers, steaks and home style cooked meals

“It’s all thanks to the customers.” states owners Allan and Kristi Marks.Jean’s Cottage Inn is excited to celebrate their 75th Anniversary the first week of April in 2021. The restaurant was started in 1946 and was initially called the Tick Tock. It was located in the front of original owner’s Bob and Jean Boyd’s three-bedroom home. There was a long bar that could accommodate up to 15 stools and 3 or 4 booths. Bob and Jean’s son and two daughters grew up at the restaurant and could be found bussing tables year-round.In 1961 Bob passed away. Ron started running the restaurant with his mom. The restaurant moved across the street to its current location and renamed it Jean’s Cottage Inn. The traditions that had been built at the Tick Tock continued and locals swore they had the best steaks and the best prices in the valley. Their Friday night steak nights would often have a line out the door as people waited for a table to clear.Allan Marks started working at Jean’s Cottage Inn in 1990 as a cook and fell in love with the business. He’d started in the restaurant industry at Denny’s, and had even moved with his wife Kristi to Florida to work at a new Denny’s. After being in Florida a couple of years, Allan’s best friend Harvey Pina who grew up with Ron’s son Ryan, contacted Allan and said Ron was wondering if he’d want to be a cook at Jean’s. Allan said ‘yes’ and then he and Kristi moved back home and Allan started learning the ropes of Jean’s Cottage Inn.“Ron became a father figure to me, and he could quickly tell that one day I might be interested in owning the business. He started teaching me every aspect of the business. It’s so much more than providing a consistently good meal. You really have to understand a little bit of everything, and be able to adjust on the fly as well. I consider myself a cook, but I’ve really become a jack of all trades as I help with the building maintenance, and had to learn the details like inventory control, personnel management and how to survive the ebbs and flows of owning a restaurant.” stated Marks.Allan and Kristi purchased Jean’s in 1997 from the retiring Ron and Betty Boyd. Over the years Marks can boil Jean’s Cottage Inn’s continued success to one general mantra, “We enjoy making people happy.” Allan and Kristi both stated that being in an environment where you get to bring a smile to people’s faces day in and day out makes each day worth it. They know many of their customers, and in fact, have served members of the same family for multiple generations. They also give credit to their staff and commented that many of them have been with Jean’s for years.Jean’s is known for their big breakfasts, delicious burgers and their T-Bone steaks. They offer several salads, sandwiches, soups and beverages as well. And they still cook everything like you’d do at home. You may notice that desserts aren’t on the main menu. Ron thought that if a customer stays for dessert long after finishing their meal, that it doesn’t give people who are waiting a chance to get a table. Marks has continued this tradition. The pandemic has brought countless challenges, yet Jean’s Cottage Inn has managed to endure the past year, in large part because of their customers. “Our customers have been truly amazing,” stated Marks. “We even had multiple customers buy over a $1,000 of gift cards to help us out. We’ve introduced some new items like a loaded baked potato which was quite successful. We wouldn’t be here without our loyal customers for certain. The pandemic also taught us to think outside the box, and we created TJ’s Pad which allowed us to offer outdoor dining. This feature is still proving popular to customers, even as indoor seating has been expanded in restaurants. Jean’s Cottage Inn is also known for their popular Deccio’s Seasoning line which includes an all-purpose seasoning, a salad seasoning and a ranch dressing dip. The seasoning is used in many of their own recipes and is also used by restaurants throughout central Washington. It can be found at several retail outlets as well. Deccio’s Seasoning is the official sponsor of the popular Union Gap Tourism’s #SmallTownTourismChat. A monthly Twitter chat focused on small towns and regions throughout North America and the world. You can celebrate with Jean’s starting on April 1st when they will begin 75 days of one lucky customer receiving a free meal each day. Jean’s Cottage Inn is located at 3211 Main Street in Union Gap. Phone: 509-575-0709 www.jeanscottageinn.comContact: Eric Patrick, Visit Union Gap, 509-985-7768, epatrick@gjhco.com Allan Marks, Jean’s Cottage Inn, 509-575-0709Jean's Cottage Inn 3211 Main St Union Gap, WA 98903 epatrick@gjhco.com Allan Marks - 509-575-0709Jean's Cottage Inn has been a mainstay of Union Gap for over 7 decades. It is a multi-generational business which was sold to one of the family's employees. They know many of their customers by name, and they themselves have served multi-generations of customers as well. They are open weekdays only, and serve breakfast, lunch and dinner. It is a story of a 'classic Americana diner', surviving and thriving over the years and various challenges.