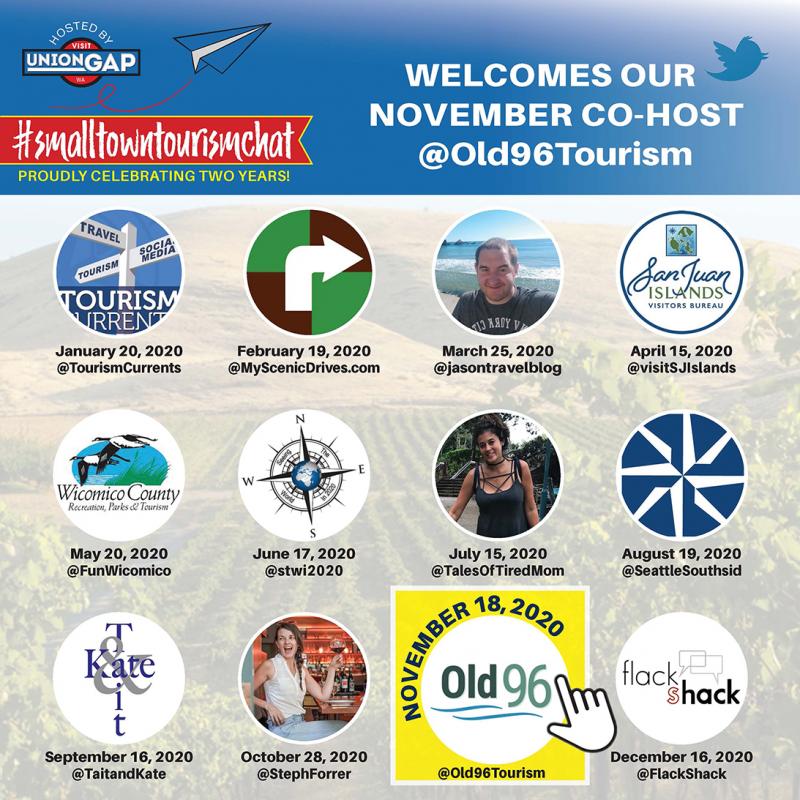 Union Gap’s “Small Town Tourism Chat” on Twitter celebrates its 2nd Anniversary (Union Gap, WA November 12) Union Gap’s popular #SmallTownTourismChat on Twitter turns 2 years old with their next chat on Wednesday, November 18th. The chat was started by Visit Union Gap’s Marketing Director Eric Patrick as a way to reach travel writers, travel bloggers, tourists and other small towns and regions throughout North America. “We love participating in travel chats on a weekly basis, but didn’t see one focused on small towns and regions. We’ve been happy with the response and interaction and have really grown our travel and tourism community,” stated Eric Patrick The Small Town Tourism Chat is held once a month, typically on the 3rd Wednesday barring scheduling conflicts. The chat starts promptly at 2:30pm PST/5:30pm PST and 6 questions are asked over a ½ hour period. The first several chats were hosted by Visit Union Gap individually, but they soon added a co-host to both expand the audience and to get a different and fun perspective. “As we got more and more people and places interacting, we realized there was a lot of energy for our Small Town Tourism Chat and we reached out to frequent participants to see if they’d like to join us to help keep topics fresh and flourishing. We have been able to have a co-host each month since our first host joined us in March of 2019, and we currently have co-hosts booked into March of 2021,” stated Patrick. The goal was to have co-hosts across a broad spectrum of people and places with different expertises, experiences and interests to continually have something new on the chat. Co-hosts have included travel writers and bloggers such as Lara Dunning of ‘Small Town Washington and Beyond,’ Lindsay of ‘I’ve Been Bit! A Travel Blog,’ which was Small Town Tourism Chat's first international co-host, Stephanie Forrer of “Eat Drink Travel Y’All”, Heather McCurdy of ‘Real, The Kitchen and Beyond,’ Erica of ‘Tales of A Tired Mom’, Lisa of “Drug Store Divas”, Lori of “SouthernerSays’, and in March the co-host was Jason of “Jason Likes to Travel’ from England. The Small Town Tourism Chat has also had several regions throughout the U.S. participate as co-hosts including the San Juan Islands, Wicomico County in Delaware, Seattle Southside, Shasta Cascade California, and Colonial Beach, Virginia. The final category of contributors has been travel experts and consultants such as Becky McCray who is an international speaker on rural and small towns, Tourism Currents who are social media tourism professionals and Tate & Kate Consulting from South Dakota who help small and rural towns survive. The November 18th co-host is Old 96 District which promotes travel and tourism in the Old 96 District of South Carolina. There will be prizes given away throughout the chat from both Union Gap and Old 96 in celebration of the 2nd Anniversary. #SmallTownTourismChat has also been asked to participate in two upcoming popular travel chats, the weekly #TravChat hosted by Travchat from England, and on the #RoadTripChat hosted by Lori of Southerner Says on Twitter. -End – Eric Patrick Visit Union Gap 5110 Tieton Drive, Suite 310 Yakima, WA 98908 epatrick@gjhco.com Union Gap, WA is located in the heart of central Washington State. It is a small and vibrant community with a population of just over 6,000 people. We have great food, 4 national chain hotels, one of the largest Ag Museums on the West Coast and are the gateway to wineries and microbreweries. We have miles of hiking and walking/biking trails that start in Union Gap and countless other trailheads within a 30 minute drive. We are also close to a lot of outdoor forest area for your winter and summer forest and mountain toys.

02-28-2011 | Business, Economy, Finances, B …
Bizerba GmbH & Co. KG
When Smartphones chat with Scales
Bizerba is presenting a system solution for mobile couponing at Euroshop 2011 in collaboration with Valuephone Balingen, 25th February 2011 - A code appears on the scale's display during the serving process. The customer scans this code in and a recipe and coupon for an appropriate additional product appear directly on the smartphone's or mobile phone's display. With this application, food retailers can inspire the iPhone generation with a high affinity for
02-03-2011 | Business, Economy, Finances, B …
Panelwarehouse.com
Panelwarehouse.com Introduce Live Chat to Website
Manchester, United Kingdom (January 21, 2011) - Panelwarehouse.com, a leading manufacturer and supplier of display and exhibition stands, introduce a Live Chat service to their website to actively interact with customers. If a company wants to be successful, they should ensure they take their customers' comments onboard to improve their customer service. They should also ensure that their customers have the appropriate information to make a decision about purchasing a product
01-18-2011 | IT, New Media & Software
Drishti Soft Solutions
Drishti-Soft launches Ameyo Chat 2.0
Taking the multimedia customer interactions to a new level, Drishti-Soft launches Ameyo Chat 2.0. This live chat capability is an in-built tool in their award-winning contact center solution - Ameyo. Offering collaboration within the team or mass online messaging (based on triggers/alerts/events) to the prospect/customer, Ameyo Chat 2.0 promises to be a value-add to the customer support services. Enterprises can integrate live chat to their websites and configure the chat
11-23-2010 | IT, New Media & Software
Live2Support Inc
Live2Support Launches Live Chat iPhone App
Live chat software company Live2Support.com Inc. located on the world wide web at www.Live2Support.com has just launched a full-featured iPhone mobile application for its live chat product. Companies which currently use Live2Support live chat technology on their websites or are planning to do so in the future can now extend their live chat service to customers who wish to use the Apple iPhone to access the Internet and use live
03-14-2009 | IT, New Media & Software
Assmann Electronic GmbH
DIGITUS® Webcams bring fun into the chat
DIGITUS® immediately provides all webcams with new chatting software allowing the user to create his virtual screen appearance by using avatars. "Fix8” analyses the user’s rendering and uses Fixies (Avatar) technology and the design options of Fix8 FaceMaker to create a virtual figure. The integrated voice maker can also be used to change the voice. Your own videos and pictures can also be created. The fun software has to be
12-27-2007 | Science & Education
Compare Infobase Limited
Chat Forum Exclusively for Students at Indiaedu.com
At a time when the Internet is loaded with hosts of social networking websites, one still needs to struggle to find a platform that is meant entirely for students who are on the threshold of making the most important decisions of their life regarding their career. But filling the void, Indiaedu has recently launched a chat forum that provides a platform for students to discuss all the issues, they are
Comments about openPR
We publish our press releases on openPR.de because we like people who are "open" - just like us.
Frank Obels, CEO, INCONET - Informationssysteme, Communication und Netzwerkberatung GmbH