Adventists, Catholics and Evangelicals Unite in Hungary “By Order of Pope Francis” 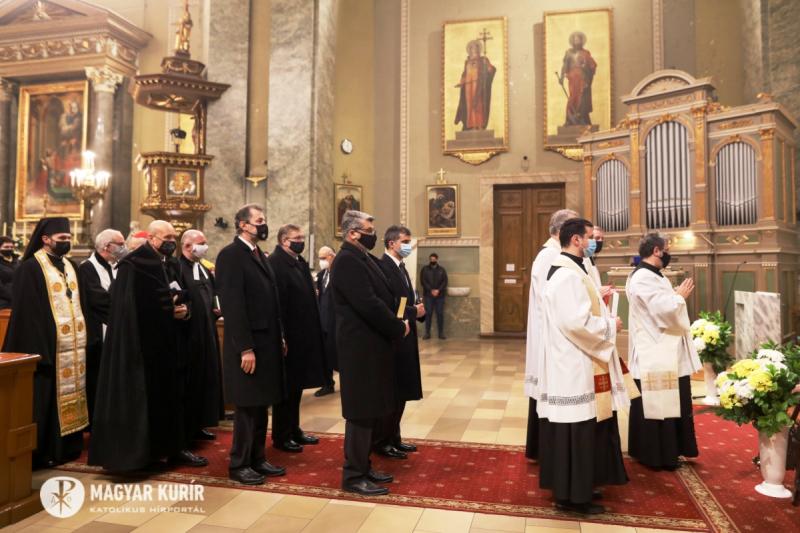 On Sunday, January 24, 2021, Roman Catholic Cardinal Peter Erdo organized a service during the last day of the 2021 Ecumenical Week of Prayer for Christian Unity. This final ceremony took place at St. Teresa the Great Catholic Church in Budapest, Hungary and was attended by Catholics, Lutherans, Baptists, Methodists, Jews, Seventh-day Adventists and Pentecostals.The leaders included: Catholic Cardinal Peter Erdo, Reformed Church Bishop Jozsef Steinbach, Catholic Bishop Abel Szocska, Lutheran Bishop Paul Lackner, President of the Hungarian Baptist Church Janos Papp, President of the Methodist Church in Hungary Laszlo A. Khaled, President of the Seventh-day Adventist Church in Hungary Tamas Ocsai, Chief Rabbi Robert Frolich; President of the Hungarian Pentecostal Church Albert Pataky and Secretary General of the Ecumenical Council of Hungarian Churches Pastor Vilmos Fischl. [1]Roman Catholic Cardinal Peter Erdo welcomed the participants with the following words:“Dear Brothers and Sisters, Today is the Sunday of the word of God in the Catholic Church by order of Pope Francis. On the last day of the ecumenical week of prayer, this feast reminds us that the Word of God connects the various Christian communities.” [1]In other words, Cardinal Erdo revealed that this group of ecumenical leaders had gathered on Sunday, God’s Day, January 24, 2021, in obedience to Pope Francis’ “order” to celebrate the Week of Prayer for Christian Unity. That is what the Catholic Cardinal said and that is what the local news published along with photos of the different leaders apparently obeying the Pope’s call, including Tamas Ocsai, the President of the Hungarian Union Conference of Seventh-day Adventist Churches, the top Adventist in the country.Notice what else was published about the ecumenical leaders gathered inside the Roman Catholic Church:“Following the preaching, the representatives of the various Christian denominations thanked the Lord for their coexistence, prayed for the acceptance of one another, for growth in faith and in all life; for those who are persecuted for their faith and for those who help them; so that we can confront all injustice.” [1]The growing prominence of the papacy in political and religious affairs is astonishing. Both political and religious leaders are paying respect and obedience to Pope Francis. The world is basically saying, “Who is like unto beast? Who is able to make war with him? (Revelation 13:4).This is the same presumptuous power described by inspiration in the following words: “And there was given unto him a mouth speaking great things and blasphemies” (Revelation 13:5). Not only does Rome speak “blasphemy” by claiming to have changed God’s law by calling Sunday the Lord’s Day, but it also blasphemes by claiming that it is infallible and has the power to forgive sin. Are we now receiving orders from this power?This is the same persecuting power that “was given unto him to make war with the saints, and to overcome them: and power was given him over all kindreds, and tongues, and nations” (Revelation 13:7). Have Protestants forgotten their own history? Don’t we remember the Revocation of the Edict of Nantes, the St. Bartholomew’s Day Massacre and the Papal Crusades against the Huguenots, the Waldensians, the Albigensians and the Anabaptists? What about the Holy Roman Inquisition and the tens of millions of Protestants who were executed during the long dark period in which Rome ruled both spiritual and temporal power?Are we now ignoring all of this church history today? Apparently, yes. We have not only forgotten our sacred history, we are repeating it again and we are fulfilling Bible prophecy by honoring the beast: “And all that dwell upon the earth shall worship him, whose names are not written in the book of life of the Lamb slain from the foundation of the world” (Revelation 13:8).And yes, this is the same power that everyone seeks to please, including many Seventh-day Adventists, and the same power that we’ve been warned about in the Third Angel’s Message of Revelation 14: “If any man worship the beast and his image, and receive his mark in his forehead or in his hand, the same shall drink of the wine of the wrath of God which is poured out without mixture into the cup of His indignation; and he shall be tormented with fire and brimstone in the presence of the holy angels and in the presence Of the Lamb” (Revelation 14:9).Church and state are coming together to elevate the Papacy again. This will result in the healing of the deadly wound. Every true student of Bible prophecy and every defender of religious liberty should know what papal supremacy means. This is a power that requires the praise and submission of kings, emperors, religious leaders and all people on the earth.Is this power greater than Christ? Our Savior stood before Pilate and said, “My kingdom is not of this world” (John 18:36). He also said, “Render to Caesar the things that are Caesar’s, and to God the things that are God’s” (Mark 12:17). When did Jesus require that every nation send Him ambassadors? When did Jesus usurp the authority of earthly governments? When did Jesus accumulate great wealth, fame or political power?The Papacy’s desire to be recognized worldwide by all people has never been so well organized today. Rome’s ambition to be the sole authority in global affairs is causing the world and the Protestant churches to wonder after the beast. As we witness the closing scenes of Bible prophecy being staged, let us proclaim with power the most emphatic message of Revelation. As the world worships the great impostor called the First Beast of Revelation 13, God will send a mighty angel from heaven with the divine call to every nation and people to “Come out of her, my people” (Revelation 18:4).Sources[1] https://www.magyarkurir.hu/hirek/isten-tortenelmi-hivatast-bizott-rank-kereszteny-zsido-imaora-budapesten[2] https://www.adventistyearbook.org/entity?EntityID=13069Contact: Andy Roman, Publisher Address: Advent Messenger, PO Box 96, Dover, OK 73734 Phone: (888) 299-2119 Website: www.adventmessenger.org Email: adventmessengers@gmail.comAbout: Advent Messenger provides news and commentary on current events, top stories, social trends and political and religious events. For more news visit www.adventmessenger.org

You can edit or delete your press release Adventists, Catholics and Evangelicals Unite in Hungary “By Order of Pope Francis” here

08-26-2020 | Leisure, Entertainment, Miscel …
Advent Messenger
900 Catholic Masses for President Donald Trump
With only three months to go until the November 3, 2020 presidential election, the Trump 2020 campaign is working hard to attract Catholic voters. The Trump campaign has a website to court the Catholic vote. It is called Catholics for Trump 2020 and it is motivating Roman Catholics to support the re-election of Donald Trump by appealing to the abortion issue. The website says: “Catholics for Trump will energize and activate
01-31-2019 | Arts & Culture
Dan Corner
Infant Baptism By Catholics Vs Scripture; Evangelical Outreach Ex Catholic Dan C …
Can Biblical truth be debated by man? And, if so, would the consensus reached be based on the Word of God? Infant baptism is one such issue that has been debated endlessly since the Middle Ages. There are two broad schools of thought. In an article on AboutCatholics.com entitled "A Simple Defense of Infant Baptism", the article states "Infant baptism is one of the traditions that was handed down, but not
01-31-2013 | Associations & Organizations
Greek Catholic Union (GCU)
Greek Catholic Union Donates $100,000 to SS. Cyril & Methodius Byzantine Catholi …
Beaver, PA - The 56th Annual Saint Nicholas Celebration to benefit Saints Cyril and Methodius Byzantine Catholic Seminary was held on Sunday, December 9, 2012 at Saint John Cathedral Center, 210 Greentree Road in Munhall, Pennsylvania. During the program, George Juba, GCU President and CEO, presented an educational grant of $100,000.00 to Archbishop William C. Skurla of the Archeparchy of Pittsburgh for the SS. Cyril & Methodius Byzantine Catholic Seminary. In
10-10-2012 | Associations & Organizations
Greek Catholic Union
GCU - Greek Catholic Union to Support Lee National Denim Day
Beaver, PA - To show support for breast cancer awareness month, the Greek Catholic Union (GCU) is participating in Lee National Denim Day, a fundraiser created by Lee Jeans in support of the American Cancer Society. This is the third year of participation by GCU on a national level with a registered team. Not only are office employees at the GCU National Headquarters collecting donations, four lodges and districts
09-28-2012 | Politics, Law & Society
BoD, Books on Demand, Norderstedt (Autor: me)
The Catholic Church and the divorced and remarried
A Bielefeld theologian opened an ecumenical view of the Orthodox Church and from there he opened prospects for a current controversial issue in the Catholic Church Almost 20 years after the pastoral letter of the bishops of the Oberrheinischen Kirchenprovinz "Zur seelsorglichen Begleitung von Menschen aus zerbrochenen Ehen, Geschiedenen und Wiederverheirateten Geschiedenen" since May 2012, this explosive topic is discussed in Germany not only from the "usual church critics", but rather
12-16-2009 | Associations & Organizations
Greek Catholic Union
Greek Catholic Union Opens Ski Weekends to Non-members
BEAVER, PA - In response to the recent cold and snowy weather, the Greek Catholic Union (GCU), announced this week the dates for their 3 ski weekends, with a change in the events’ structure to invite non-member groups from regional churches to be a part of the fun. “These weekends promote the social benefits of belonging to a fraternal organization and allow members an opportunity to introduce new friends and
Comments about openPR
OpenPR ist the nicest and most clearly laid out PR platform I have seen to this day. The press releases are displayed very nicely and clearly and without any unnecessary frills. The updates are fast and the finished release looks appealing and is clearly legible. Even with 16 years of experience one discovers new things from time to time. Congratulations!
Gabriele Ketterl, Director Marketing & PR, Menads