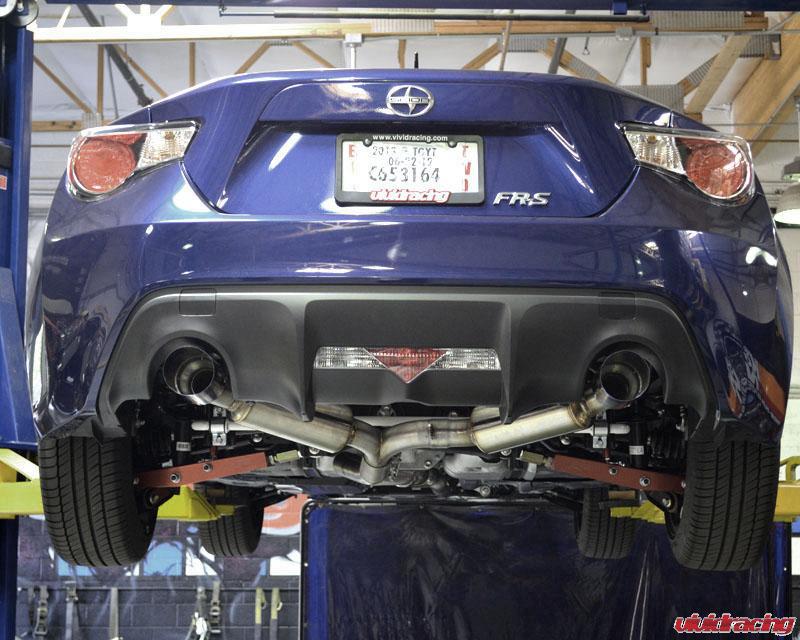 Vivid Racing’s new Project Scion FR-S is far ahead of the competition, including the BRZ tuners. First up is the exhaust system. This is one that any enthusiast will truly appreciate. The complete header back exhaust system is designed to be fully modular with the factory exhaust. This factor is for many reasons: performance, state regulations, budget, etc. Each piece can be used with the stock system or used in full. The twin 4 inch titanium axle back features twin shorty mufflers to give it a nice tone and save much weight from the factory one. Since it is modular, it can be fitted to the stock midpipe or, for those who want an even more aggressive sounding FR-S, there is also the Agency Power midpipe. This midpipe can be had with or without resonators to give it a more GT track sound. If you are going for the full race use, go with the cat delete front pipe that connects to the header. Being that this Subaru Boxxer engine is very familiar in its design, AP was also able to crank out a new high flow header design. Each one of these pieces is in the process of dyno testing or production. Also underway in development is a cold air intake kit. Focusing on improving the filter surface area and concealment, they have designed an intake tube to not need custom tuning and to give a more responsive throttle and aggressive engine tone. As power increases, so is the need to keep it delivered to the rear wheels, so a street performance clutch system with lightweight flywheel is in the process of being built. The complete stock clutch and flywheel assembly weighs 33.65lbs with the flywheel alone weighing 20.6lbs. With the new performance clutch and aluminum flywheel, this weighs only 22.70lbs saving almost 10lbs right there, but a staggering 11lbs of rotational weight by just swapping out the flywheel alone. Typically rotational weight has a factor of 3 so that is 33lbs saved giving the engine quicker throttle response for a quick rev out.Vivid Racing is a multi-million dollar small business in the automotive aftermarket industry. They have been featured in almost every magazine about their business and cars they have built. Rob and Dan have competed in 3 Gumball 3000 events, Bullrun Rally, and featured on ESPN2's "Import Racer" TV show. Vivid Racing has also built several demo cars including some for Pepsi/Mazda and Cusco/Subaru.Betty Mermelstein bjmerm@vividracing.com Dan Mermelstein Vivid Racing 1429 W. Scott Ave. Gilbert, AZ 85233 480 966-3040 x222