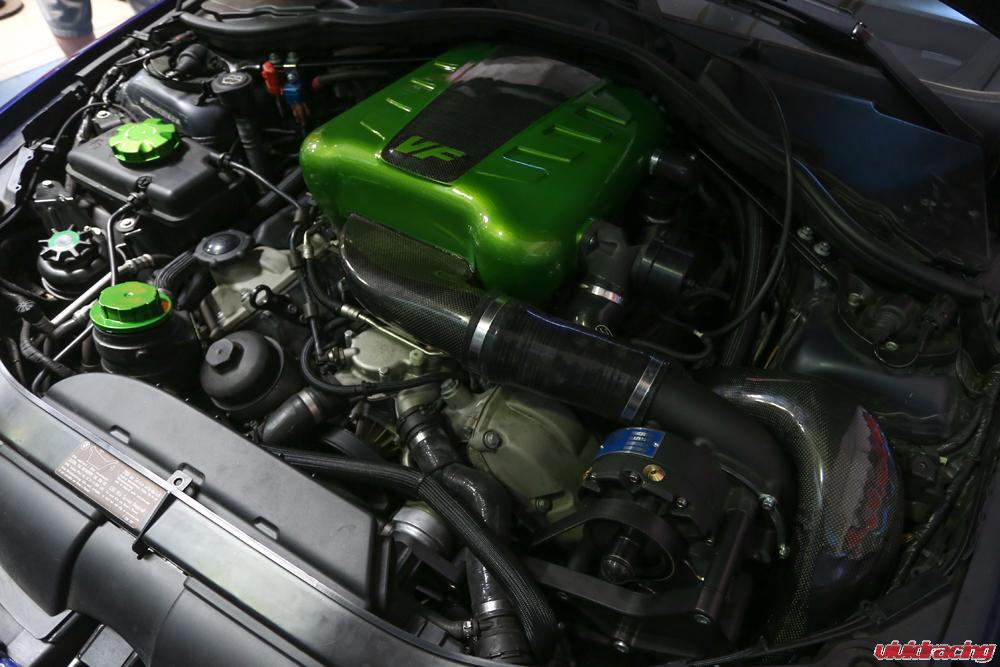 When you finally get that new car, you immediately start modifying it, spending thousands upon thousands on cool aftermarket parts. Before you know it, $10,000 is gone and though you think adding the intake + exhaust + headers + tune is cumulative in horsepower, it’s not. That’s why if you want big power on your naturally aspirated engine, there is no replacement for…. BOOST!!! Supercharging cars for over 15 years, VF Engineering delivers the ultimate in bolt-on, high quality forced induction kits for cars such as the BMW M3, Lamborghini Gallardo, Porsche 911 Carrera, and more. Based in Southern California in the heart of performance and tuning culture, VF has made their main mark with the BMW E46 M3 and Porsche 996 997 supercharger kits. Cars such as the BMW M3 are high compression and really don’t want boost. In fact, they don’t even like aftermarket intakes! So any type of kit that you install on a normally aspirated engine has to have proper fueling components, highly engineered parts to create the power, perfect tuning, and just enough boost to give you the safe head slam in your seat. When the opportunity to own a E90 BMW M3 V8 came into Vivid Racing’s hands as a daily driver, they had to jump on it. It’s a great sedan with 414hp and 295ft/lbs of torque. The high revving V8 was missing something much like the V10 did. That something was the feeling of boost. Having begun a strong relationship with VF Engineering years ago as well as selling their Porsche 996 997 Superchargers, Vivid Racing was aware of the quality and engineering that went into these new BMW M3 V8 kits. But if you want to play, you got to pay. Justification of this cost to some can be quite difficult. With a price tag of $13,900, is it worth it? However you decide to justify the cost, it’s worth it, because it really did everything that VF Engineering set out to prove. First is the quality. The intake manifold’s design to incorporate all 8 ports while fitting neatly under the hood is a true work of art. Without a doubt, it is heavier then the stock BMW plastic manifold and airbox, but if you consider the fact that BMW already took off 15lbs from the outgoing E46 6cyl, you are still ahead. Included in the kit are upgraded injectors, which are a drop in replacement from the factory ones. The Vortech V3 Supercharger has a self-contained oil unit. Overall, it is heaps better then a roots style blower found on a Jaguar, Mustang, or other supercharger systems. Comparing to the obnoxious whine from the other style supercharger used in the past, the Vortech blower fits neat and tidy in the engine bay. VF’s complete CNC machined bracket for the supercharger and pulleys is all CNC machined billet aluminum, which, though you would expect some fail at it, is straight as an arrow. With its front end intercooler sitting in front of the AC condenser, it definitely makes a head turn and say, “is that boosted?” The final part of the kit, being the air intake, flows nicely off the blower and down into the driver’s side front bumper duct. Having the Vorsteiner front bumper may make the fitment a bit different, but the air filter is pretty much just right out there. Considering the space, this is really the only place it can go. At the end of the day if your BMW M3 had stock bumpers, stock wheels, stock ride height, and you lifted the hood to show off the VF Engineering VF620 kit, you would think it was factory. Vivid Racing considered that a bit boring, so they geared up the supercharger kit with custom carbon fiber accents. The intake manifold had been stripped down and painted Lamborghini Green to match the monster Brembo brakes and side mirrors. Carbon fiber trim covered the center of the manifold and the front inlet. They then took the intake pipe that comes off the supercharger and goes to the cone filter and made that carbon fiber as well. The car was then coupled with Agency Power Section 1&2 pipes joining up to the Agency Power Titanium Tip race exhaust system. What sounded mean already had just become a tire ripping beast. All of this on a 7 speed DSG paddle transmission. The car was then placed on the Mustang AWD Dyno at Vivid Racing where it put down an astonishing 474 rwhp. To compare on the dyno, a Porsche 997.1 Turbo stock is 380 awhp, a Porsche 996 Turbo stock is 330 awhp, a 2012 Mercedes CLS63 V8 Bi-Turbo is 380 rwhp, a Mercedes C63 V8 is 320 rwhp, and a stock 2009 Nissan GT-R is 430 awhp. The look, fitment, and performance of the VF-Engineering kit surpassed expectations for what was and still is a daily driver. In combination with the Agency Power exhaust system, this “daddy car’ is now an absolute animal.Vivid Racing is a multi-million dollar small business in the automotive aftermarket industry. They have been featured in almost every magazine about their business and cars they have built. Rob and Dan have competed in 3 Gumball 3000 events, Bullrun Rally, and featured on ESPN2's "Import Racer" TV show. Vivid Racing has also built several demo cars including some for Pepsi/Mazda and Cusco/Subaru.Betty Mermelstein bjmerm@vividracing.com Dan Mermelstein Vivid Racing 1429 W. Scott Ave. Gilbert, AZ 85233 480 966-3040 x222

01-24-2019 | Tourism, Cars, Traffic
VISPIRON ROTEC GmbH
ROTEC ENGINEERING - Engineering services from VISPIRON ROTEC
In addition to its measuring technology in the field of torsional vibration analysis, VISPIRON ROTEC has launched ROTEC ENGINEERING and now offers engineering services for complex measuring tasks. Due to the high demand on the part of VISPIRON ROTEC for services for demanding measurements and analyzes in the automotive sector, the company is expanding its offer to include engineering consulting. VISPIRON ROTEC is known for its market-leading measuring technology in
07-17-2018 | Business, Economy, Finances, B …
Edumateengg
Digital Engineering Learning
In this world of Digitalization definately go for Online ELearning with edumateengg.com, they have their own application too! Edumateengg helps you with live engineering video lectures according to your year and subjects. This application even has previous years question paper attached to it along with syllabus! Want to predict your rank? Want to check out the best Engineering Colleges in Navi mumbai & mumbai? Definately Go for edumateengg.com leading application in India for
07-12-2018 | IT, New Media & Software
Edumateengg
Edumateengg - Engineering College Review
College Review provide you with the virtual view of all the engineering colleges. You will get details about the seats intake, placements, infrastructure, crowds and every detail you need while selecting engineering college. Review here is given by student of those particular engineering college. Photos of college's fest and events will help you choose engineering college wisely. Check them at https://edumateengg.com/review Edumate engg is India’s 1st E-Learning App for Engineering Students With Best
07-31-2017 | Business, Economy, Finances, B …
StrucCore
Civil Engineering Services | Structural Engineering Consultant
We are leading civil and structural engineering consultants, providing structural design and civil engineering services By Ankit Patel, Friday, 28 July 2017 Our Company StrucCore is devoted for providing the best solutions, as well as results to clients by utilizing quality design & consulting services for architectural & engineering jobs. StrucCore has specialized in delivering services in various phases of Engineering and construction like Estimation/ Cost Analysis, Tendering, Architectural Planning, Structure Designing,
01-28-2016 | Business, Economy, Finances, B …
we.CONECT Global Leaders GmbH
you.CONECT - Tomorrow’s Business Engineering
The mission of you.CONECT is to equip its audiences with the intelligence to understand a world shaped by technology. you.CONECT Events are designed to build and to develop a truly global trendsetting & technology driven community. Our platform specializes in high level business events that are designed to bring you closer to the people you need to meet on critical topics to network, learn and define the future of the
10-10-2011 | Industry, Real Estate & Constr …
Evergreen Engineering, Inc.
Evergreen Engineering Has Moved
After more than 26 years in the same location, Eugene-based Evergreen Engineering, Inc. has moved to new premises at 1740 Willow Creek Circle. Located in a modern campus setting in west Eugene, our new office offers easy access to freeways and the airport. Principal and co-founder Rich Bernhardt says, "We are growing and we need additional space as we expand. This move will allow us to continue to expand and
Comments about openPR
Your portal is fast, simple, and easy to use. Others may have more functions but they also demand more editing time, you have to preformat the text in order to achieve a good result etc. I think openPR is really fantastic!
Andreas Knepper, wallmedien AG