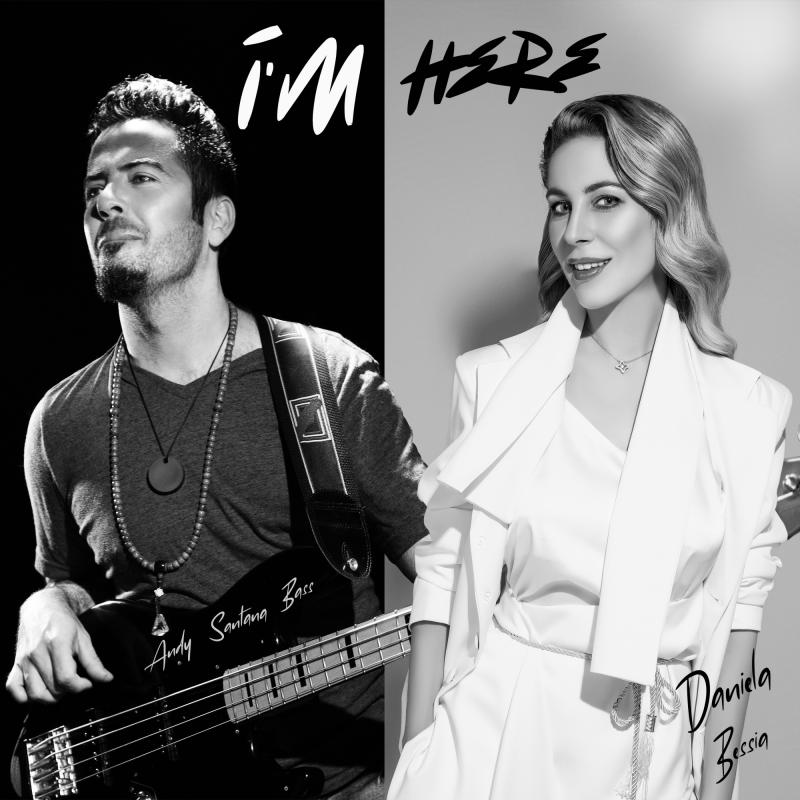 Daniela Bessia and Andy Santana Bass, release their new album "I'm Here" along with their new Music Video "Crazy" Available on all audio and music platforms from February 12, 2021.The last musical work from the Italo-Argentine composer Daniela Bessia and the Cuban musician and producer Andy Santana Bass has already come out, a complete album called “I'm Here” with 8 original songs in English and Spanish lyrics.I'm Here (Album) comes together with a Music Video of the song “Crazy” (Music Video) directed by the famous Argentine director Gabriel Grieco, which will be available worldwide on all streaming platforms such as VEVO, iTunes, Spotify, Facebook, etc from February 12, 2021."I'm Here" is an album with various genres from pop, reggae, rock, Caribbean music as the most prominent styles. "Crazy", with an international crew, was filmed in Shanghai at the famous Pearl Tower.   * Several sponsors participated during the production, as well as with the support of the Argentine Consulate in Shanghai. * The lyrics of the song "Crazy" was composed half in Spanish and half in English.   Daniela Bessia is an artist born and raised in Buenos Aires Argentina. In 2008 she was invited to participate in an international language TV Show called "Han Yu Qiao", where she had the opportunity to get to know China. Once she returned to Buenos Aires, she won a scholarship to study languages in China-Shanghai, at the ECNU University, where Daniela use to participate in all the extra-curricular cultural courses. One day singing for an event at the University, the director of the famous program “China's Got Talent” hired her to be a guest for the opening of his program to sing along with the winners of the previous season. After the program was broadcasted with great success, independent and national productions did not take long to call her to film new TV Shows, documentaries, cooking shows, cultural programs, television series, movies, etc. The Shanghai government, Shanghai Daily, and Shanghai Television awarded Daniela with the award of "Excellence Award", rewarding foreigners who improve Shanghai city.We can hear her new album here: https://ffm.to/imhere-out-12022021And watch her new video here: https://ffm.to/crazy-musicvideoPressForRelease Jing An Kerry Centre 1228 Yan'an Road Middle Shanghai, China managerfilm@hotmail.com 13764771413Music Management, Entertainment, music, movies, Tv-Shows,

03-02-2021 | Health & Medicine
Familify
Storybook- Here's an app that's changing the lives of parents
Miami, US. March 2021: Infants and children need sleep to grow and develop well. Adequate sleep is also essential for their health and immunity. Sleep disorders make it hard for your baby and you to get the rest you both need, which could be a bigger issue. Two-third of children across the globe have sleep disorders. The reasons for sleep disorders may vary, but here's an incredible tool that allows
09-18-2020 | Politics, Law & Society
Servizio Media Word e Fotografie di Daniela Shams
Press release account suspension Twitter Daniela Shams
On Thursday 17 September 2020, the account of the publisher of Lifestyle4unique magazine was wordlessly blocked by Twitter. Daniela Shams has been on the platform since 2012 and is known for the slogan "honest, stylish, elegant". In this sense she maintains a cordial contact with her followers. It is one of many accounts where things are friendly. Daniela Shams attaches great importance to the fact that different views are mutually
03-23-2020 | Arts & Culture
Daniela
Ireland Just Got Deeper as Newcomer Artist Daniela Introduces her Powerful Debut …
Hailing from Ireland, Daniela is a talented singer and songwriter with a passion for beautiful melodies and relatable sonic aesthetics. Recently, she announced the release of her debut EP Kiss preceded by a fantastic Single titled "Oceanblue," which was released in June 2019. As an Independent Artist, Daniela has been working hard to establish her sound and create a strong following. She collaborated with some of the best producers in
08-06-2018 | Business, Economy, Finances, B …
Wise Guy Research Consultants Pvt Ltd
Bookcase 2018 Global Market Key Players – AFK , Asoral , Clei , Colombini , DA …
Global Bookcase Detailed Analysis Report 2018-2023  Wiseguyreports.Com Adds “Bookcase -Market Demand, Growth, Opportunities, Manufacturers, Analysis of Top Key Players and Forecast to 2023” To Its Research Database. Description:     This report mainly introduces volume and value market share by players, by regions, by product type, by consumers and also their price change details. As a Detailed Analysis report, it covers all details inside analysis and opinion in Child's Bookcase industry. This report splits Child's Bookcase market by
05-08-2015 | Health & Medicine
FWF - Austrian Science Fund
A Ranking of Environmental Chemicals
How dangerous are environmental chemicals and what is their effect on human health? In a project funded by the Austrian Science Fund FWF, the pharmacist Daniela Schuster is currently developing a computer-based "early warning system" for potentially dangerous substances. In our daily lives we are exposed to a great variety of environmental chemicals found in cleaning substances, cosmetics, plastic products, textiles or food supplements. Many of these synthetic products leave
09-06-2012 | Leisure, Entertainment, Miscel …
Villa La Rogaia, Azienda agraria biologica, Agriturismo
Dancing Tango like the world champions, Tango workshop, La Rogaia Tango holidays …
Tango workshop with Top Tango teachers Daniela Pucci de Farias and Luis Bianchi, September 22 to 29, 2012, Villa La Rogaia, Umbria, Italy. What do have Argentine Tango and Ice dance in common? Not to much in most cases, apart of the fact that both are beautiful to look at. Specially when they are performed by real good dancrs. Rarely however do ice dancers succeed in capturing the flair of Argentine
Comments about openPR
I can't but agree to the positive statements about your portal: easy to use, clear layout, very good search function, and quick editing!
Jens O'Brien, Borgmeier Media Communication