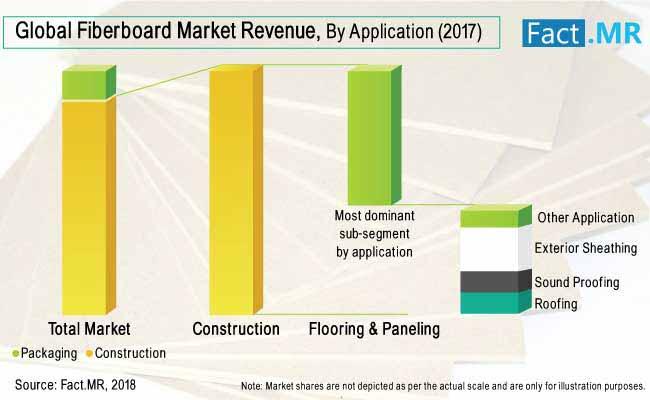 Sustainability attributes of fiberboard fall perfectly in line with the growing environment consciousness among industrialists and consumers alike. This has further bolstered adoption of fiberboard in applications that include interior flooring and paneling. Rising requirement for deforestation, to cater demand from solid wood applications, will provide the fiberboard market an edge, concerning the environmental impacts.

The revenue growth of the global fiberboard market is estimated to exceed over 6% during the forecast period of 2018-2028. Fiberboard is expected to witness growth due to rising preference over the other alternatives such as solid wood and cheap plywood used in many emerging countries. Its high resistance to change in heat and humidity levels and potential to remain crack or expansion and contraction proof during climate change, adding to its durability is one of the major reasons for which the emerging regions are opting for fiberboard.

To remain ‘ahead’ of your competitors, request a sample: https://www.factmr.com/connectus/sample?flag=S&rep_id=1589

The Asia Pacific fiberboard market is expected to remain in the leading position, during the forecast period. This region is expected to be the major contributor to the growth of the fiberboard market due to the growing preference for fiberboard over traditionally used plywood in countries such as India. China and India are expected to account for the highest growth rates during the forecast period. Amongst China and India, the former is accounted for over 90% of the total consumption of fiberboard in the Asia Pacific regions.


The fiberboard market segmented on the basis of board type is estimated to showcase a dominance by the Medium Density Fiberboard (MDF) along with High Density Fiberboard (HDF) segments during the period of forecast by three times compared to the other segments. The reason MDF is capturing the fiberboard market in India formally dominated by plywood is its versatility and cost-effectiveness. The MDF segment that accounts for a CAGR of over 6% in the period of forecast. The increasing demand for the same in the countries of the APEJ region such as India is projected to fuel the growth opportunities in for the fiberboard market.

The fiberboard market is further boosted by the major market drivers. The demand for fiberboard in cabinetry and economic consideration is triggering the elevation of the fiberboard market. Fiberboard is relatively more cost-effective and results in low damage rate compared to solid wood. With manufacturers preferring fiberboard over other alternatives owing to its handling convenience such as its technical advantage to be milled by computerized equipment, is also one of the reasons why the fiberboard market tends to showcase a rise.

The fiberboard market showcases significant potential to grow resulting to which many manufacturers are constantly working towards meeting this pace by improving their fiberboard production capacities. The industry is geared to witness a steady growth that could lead to a dynamic market by the end of the forecast period. With key market players expanding their product portfolios in the leading markets and emerging regions, the fiberboard market is likely to surge in the nearing future.

For critical insights on this market, request for Methodology here: https://www.factmr.com/connectus/sample?flag=RM&rep_id=1589

Fiberboard manufacturing companies are focusing on enhancing product capabilities and introducing new functionalities for new production activities. They are on a constant move to grab a global presence in lucrative regions such as the Middle East & Africa, and the Asia Pacific in the coming years. The increasing urbanization and improved lifestyles in these emerging countries are adding to the demand for fiberboard used for modern interiors and panels.

About Fact.MR
Market research and consulting agency with a difference! That’s why 80% of Fortune 1,000 companies trust us for making their most critical decisions. While our experienced consultants employ the latest technologies to extract hard-to-find insights, we believe our USP is the trust clients have on our expertise. Spanning a wide range – from automotive & industry 4.0 to healthcare & retail, our coverage is expansive, but we ensure even the most niche categories are analyzed. We are headquartered in Dubai, and operate from our sales office in Dublin, Ireland. Reach out to us with your goals, and we’ll be an able research partner.