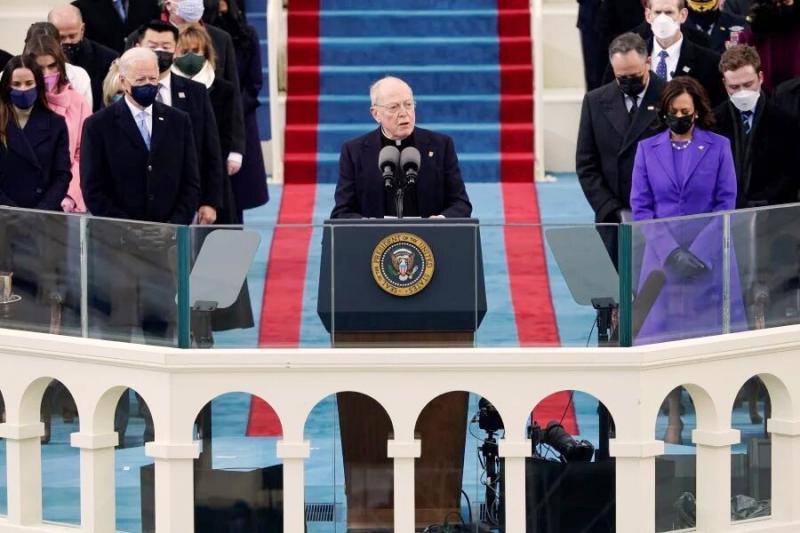 As Joe Biden was inaugurated as the 46th President of the United States, Jesuit priest Leo O’Donovan, former president of Georgetown Jesuit University, offered a prayer for Joe Biden and for our nation. Jesuit priest O’Donovan invoked Pope Francis while praying on the steps of the United States Capitol, a first in the history of presidential inaugurations. So today we had a Jesuit priest in America invoking a Jesuit pope in Rome during the transfer of power for the Office of President of the United States of America. This is significant.Then Joe Biden used a “symbolic” Bible to demonstrate the “significance” of taking the oath to defend and protect the United States Constitution. He used the Jesuit translation called the Douay-Rheims Bible. [1] Houston Baptist University reveals the following about this Bible:“The Douay-Rheims Bible was translated from St. Jerome’s Latin Vulgate by exiled English Catholic Jesuit priests in France in the late 1500s and into the early 1600s.” [2]These are signs that Rome’s triumph is almost complete here in America. She has scaled the walls of our institutions while modern Protestantism is fast asleep. Not only is the Vatican attracting and influencing both the technical and religious worlds, not only is the Pope admired by politicians and business leaders, but now the Bishop of Rome has arrived at the Office of the President of the United States. Prophecy has described that this very scene would take place during the last days:“For all nations have drunk of the wine of the wrath of her fornication, and the kings of the earth have committed fornication with her, and the merchants of the earth are waxed rich through the abundance of her delicacies.” Revelation 18:3.Rome will continue to dominate the political and religious landscape, and especially here in the United States during the Biden administration. The stage is being set for the final act in the drama. Our world is changing rapidly and it is time for the God’s people to rise up and live the full meaning of the everlasting gospel of Revelation 14:6-12. We have a message that we must fully embrace, and this same message must be disseminated to the whole world.“Are we to wait until the fulfillment of the prophecies of the end before we say anything concerning them? Of what value will our words be then? Shall we wait until God’s judgments fall upon the transgressor before we tell him how to avoid them? Where is our faith in the word of God? Must we see things foretold come to pass before we will believe what He has said? In clear, distinct rays light has come to us, showing us that the great day of the Lord is near at hand, “even at the doors.” Let us read and understand before it is too late” (Testimonies, Vol. 9, p. 20).Sources[1] https://abcnews.go.com/Politics/significance-bible-joe-biden-inauguration-day/story?id=75369058[2] https://www.hbu.edu/publications/museums/Dunham_Bible_Museum/DBM_Bruno_MatthewCarey.pdfContact: Andy Roman, Publisher Address: Advent Messenger, PO Box 96, Dover, OK 73734 Phone: (888) 299-2119 Website: www.adventmessenger.org Email: adventmessengers@gmail.comAbout: Advent Messenger provides news and commentary on current events, top stories, social trends and political and religious events. For more news visit www.adventmessenger.org

05-14-2020 | Science & Education
Pine Manor College
PINE MANOR COLLEGE AND BOSTON COLLEGE ANNOUNCE INSTITUTIONAL AGREEMENT
CHESTNUT HILL, Mass. (5-13-20)-Pine Manor College and Boston College have signed a Memorandum of Understanding (MOU) that will integrate the two institutions in a common mission to serve underrepresented, first-generation, low-income students. Under the agreement, Brookline-based Pine Manor College, renowned for serving underrepresented populations, will join forces with Boston College, a Jesuit, Catholic university with longstanding success in educating immigrant and first-generation students, in an educational partnership of mutual benefit
10-23-2012 | Sports
Fordham University Athletics
Patrick Ewing To Receive Inaugural Johnny Bach Award At Fordham University Tip O …
Patrick Ewing will receive the inaugural Johnny Bach Award from Fordham University at the Men’s Basketball Tip-Off Dinner on Monday night, November 5, at the Grand Hyatt Hotel (Park Avenue at Grand Central) in New York. John W. Bach, FCRH ’48, a coaching icon on the collegiate, professional, and international levels, is one of the greatest basketball minds of all time. A defensive specialist, he has been credited with helping the
04-13-2012 | Media & Telecommunications
WFUV-FM
Chris Isaak, Al Michaels, Christiane Amanpour, Michael Dorf To Be Honored at WFU …
A remarkable trio of music, news and sports broadcasting legends and a philanthropic community leader will be honored on Thursday night, May 10, at WFUV Radio’s Fifth Annual Spring Gala 2012 at Gotham Hall (1356 Broadway) in New York City. Charismatic singer-songwriter Chris Isaak will be feted as WFUV’s “Artist of the Year” and receive the WFUV Sound & Vision Award; Christiane Amanpour, renowned global affairs anchor for ABC News,
09-26-2011 | Leisure, Entertainment, Miscel …
CERTIFIED COOLNESS Limited
6400 heroes worldwide make the Oktoberfest in Munich carbon neutral
The Oktoberfest 2011 will be carbon neutral. 6,400 volunteers worldwide will make this possible by going on the Low Carbon Diet. “Climate and environmental protection must be fun, easy, and cool! This campaign shows how,” says Izai Amorim, also known as Mr. Cool Ness, the campaign’s initiator. The Oktoberfest is held annually in Munich from late September to the first weekend in October. In 2011 it will run from September 17th
10-08-2007 | Politics, Law & Society
Thompson & Knight
Thompson & Knight Attorney Named Chairman of the Board of Dallas Heritage Villag …
Dallas (October 5, 2007) – Thompson & Knight LLP is pleased to announce James B. Harris has been named Chairman of the Board of Dallas Heritage Village. His one-year term began at the Village’s annual meeting on September 27, 2007. Harris is a Partner in the Firm’s Dallas office who focuses his practice on regulatory litigation and counseling, including environmental matters. Harris\' environmental litigation expertise includes cost-recovery actions, enforcement actions,
11-06-2006 | Advertising, Media Consulting, …
Direct Online Marketing™
Katie McDonald joins Direct Online Marketing
Direct Online Marketing is pleased to announce the hiring of Katie McDonald as Search Marketing Associate. Ms. McDonald studied Marketing with an emphasis in Internet Marketing while attending Wheeling Jesuit University. In addition to the theoretical marketing background from collegiate learning, she has developed her marketing knowledge through practical work experience in the Pittsburgh area, including five years of in house marketing efforts in the food and beverage
Comments about openPR
We publish our press releases on openPR.de because we like people who are "open" - just like us.
Frank Obels, CEO, INCONET - Informationssysteme, Communication und Netzwerkberatung GmbH