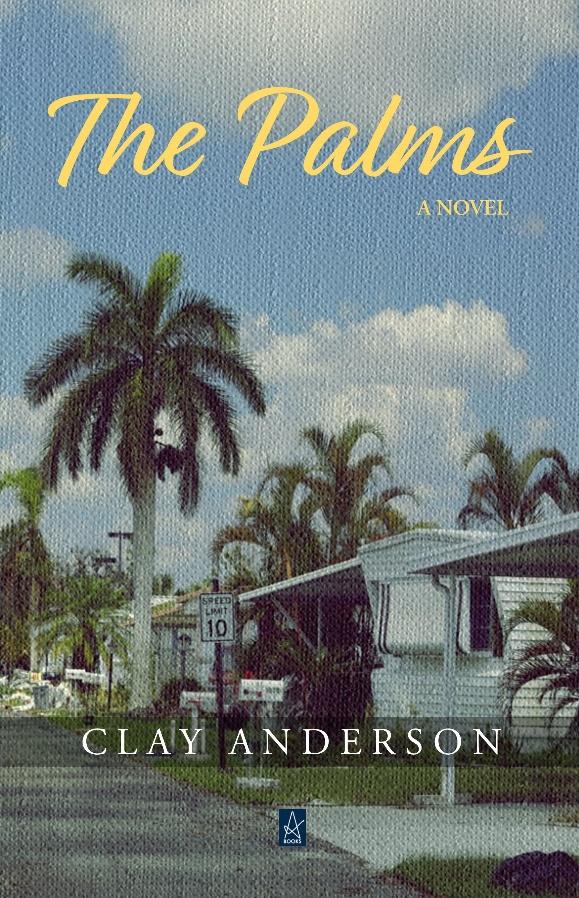 ADELAIDE BOOKS is proud to offer the latest work by Clay Anderson The Palms hitting stores everywhere now. Sixty-eight-year-old Ronnie Wells has recently been paroled for a murder he committed thirty-six years before. He lives in a run-down trailer park outside Pensacola, Florida, and busies himself by maintaining his trailer—it’s the nicest in the park—and never being late for work. Daily life for Ronnie changes when he befriends Mary, the seven-year-old girl who lives next door with her mother, Clara, a drug-addicted prostitute. The Palms weaves the stories and points-of-view of Ronnie, Clara, and Mary as they form a blended family and try to build a new existence. In Mary, Ronnie finds the daughter he never got to raise. Clara is reluctant to the friendship at first but soon realizes Ronnie is the only man she’s ever known who didn’t want her just for drugs or sex. Clay Anderson is an Adjunct Professor of History at Reinhardt University in Waleska, Georgia. He received his BA in History from Kennesaw State University and MA from Mississippi State University. He is currently an MFA student in Creative Writing at Reinhardt University. The Palms is his first novel. He lives in the mountains of North Georgia with his two dogs. Available on AmazonFor information regarding this title and its Author, or any other title by Adelaide Books, or to receive ARC reviewers copy of this book, please write to office@adelaidebooks.org244 Fifth Avenue, Suite D27 New York City, NYADELAIDE BOOKS LLC is a New York based independent company dedicated to publishing literary fiction and creative nonfiction. It was founded in July 2017 as an imprint of the Adelaide Literary Magazine, with the aim to facilitate publishing of novels, memoirs, and collections of short stories, poems, and essays by contributing authors of our magazine and other qualified writers.

You can edit or delete your press release New Book by Clay Anderson: The Palms here

08-06-2021 | Arts & Culture
Adelaide Books
New Book by Erica Abeel: The Commune
ADELAIDE BOOKS is proud to present the latest work by Erica Abeel: The Commune Her current novel The Commune is a comic satire and roman a clef that takes us inside the Hamptons commune populated by the newly liberated women present at the creation of the seminal 1970 Women's March for Equality. The Commune's pioneering feminists can talk the talk, but find themselves whipsawed between the bold new ideals of the
06-08-2021 | Arts & Culture
Adelaide Books
New book by Gregory Vincent St. Thomasino: Stephen's Landing
ADELAIDE BOOKS is proud to offer the latest work by Gregory Vincent St. Thomasino: Stephen's Landing hitting stores everywhere now. Stephen Child is in his mid-twenties. His mother died giving birth to him, his father died accidentally when he was a little boy, and he was raised in the family of his Aunt Gloria. He has recently returned to college after taking some time off and after studying at music
03-08-2021 | Arts & Culture
Adelaide Books
Time is the Enemy collection of poems by Matt Barker
Time is the Enemy is a collection of poems best described as raw thoughts captured in ink. Barker delivers unfiltered observations of life and society, told through gritty wordplay and a sarcastically sinister narrative. Barker’s work uses unorthodox arrangements and a direct approach to shed light on overthinking and anxiety. Language: English Paperback: 68 pages ISBN-10: 1951214439 ISBN-13: 978-1951214432 Product Dimensions: 6 x 0.2 x 9 inches Matt Barker grew up in the suburbs of
12-14-2020 | Arts & Culture
Adelaide Books
New Book by Florina Enache: An-Tan-Tiri Mogodan
ADELAIDE BOOKS is proud to offer the latest work by Florina Enache An-Tan-Tiri Modogan hitting stores everywhere now. AN-TAN-TIRI MOGODAN is a collection of 12 stories made of specks of ordinary life in a totalitarian regime. The author tried to depict human condition in unusual circumstances, and she looked into the hearts of people from all walks of life. Some of the stories are autobiographical, as she believes that what

09-29-2017 | Energy & Environment
Mpact Recycling
Ronnie recycler delivers special treat to children at Troyeville Primary School
Children at Troyeville Primary School were delighted when Ronnie Recycler from Mpact Recycling visited them to give a talk about the importance of recycling and how the collection of recyclables can help their school raise funds. In the spirit of Mandela Month, Mpact Recycling partnered with Chicken Xpress to treat children, teachers and volunteers to 1,000 meals sponsored by the food outlet. Mpact Recycling communications manager, Donna Noble, says Ronnie Recycler
09-19-2017 | Energy & Environment
Mpact Recycling
Ronnie Recycler & Mrs SA Finalist Prenita Reddi Visit M C Kharbai School
M C Kharbai School received a special visit from Ronnie Recycler (Mpact Recycling mascot), Yasmeen Adam (Procurement Representative from Mpact Recycling) and Prenita Reddi (Tammy Taylor Mrs SA Finalist), to form part of their Mandela Day event. Mpact Recycling has partnered with the Mrs SA pageant, a woman empowerment programme, for the third consecutive year. Through the partnership with Mpact Recycling, the Top 25 Mrs South Africa finalists are encouraged to
07-12-2017 | Leisure, Entertainment, Miscel …
Music Promotion Club
Enjoy The Music “Institution” by Ronnie Cinelli on SoundCloud
Now a days music is listened by all because it is a rapid growing form of entertainment. You can simply change the quality of your living by listening to different kind of music. You will feel fresh and relaxed and will keep you encouraged. If you are feeling sad, forget mourning, just turn on your music system and listen to “Institution” on your favorite audio streaming site SoundCloud. SoundCloud is the
04-23-2012 | Leisure, Entertainment, Miscel …
Ben's Delicatessen Restaurant & Caterers
Ronnie Dragoon Reflects on 40 Years as Owner and Operator of Ben’s Delicatesse …
In 1972, Ronnie Dragoon returned to his native Long Island from Indiana to open a delicatessen in Baldwin Harbor. He called it Ben’s Kosher Delicatessen Restaurant, which he named after his father. Forty years later, the restaurant has expanded with six locations: three in Nassau County, one in Queens, one in Manhattan and one in Florida. It offers freshly prepared food that is courteously served in a clean, well-maintained restaurant
11-26-2011 | Fashion, Lifestyle, Trends
Killen's Steakhouse
Prestigious James Beard House Invites Chef Ronnie Killen as Guest Chef
Pearland, TX – On December 20, 2011, Executive Chef Ronnie Killen of Killen’s Steakhouse in Pearland will add yet another impressive distinction to his resume of credentials: a guest chef performance at the renowned James Beard House in New York City. Killen, a Pearland native, will partner with Master Sommelier Guy Stout of Glazer’s Distributing in presenting a five-course “Steakhouse Holiday” dinner highlighting Texas Gulf Coast foods. Widely respected as
02-09-2011 | Associations & Organizations
Camp Pa-Qua-Tuck
Camp Pa-Qua-Tuck Hosts Pancake Breakfast to Benefit Ronnie Reisig Memorial Schol …
(Center Moriches, NY) — On March 6, Camp Pa-Qua-Tuck will host a pancake breakfast from 8 a.m. to noon. Proceeds from the event will benefit the scholarship fund in Ronnie Reisig’s name. The scholarship will help send a special-needs child to the camp for the summer. The scholarship is named after Ms. Reisig, who worked with autistic children at BOCES in Westhampton Beach. She passed away on June 22, 2010 after
Comments about openPR
We publish our press releases on openPR.de because we like people who are "open" - just like us.
Frank Obels, CEO, INCONET - Informationssysteme, Communication und Netzwerkberatung GmbH