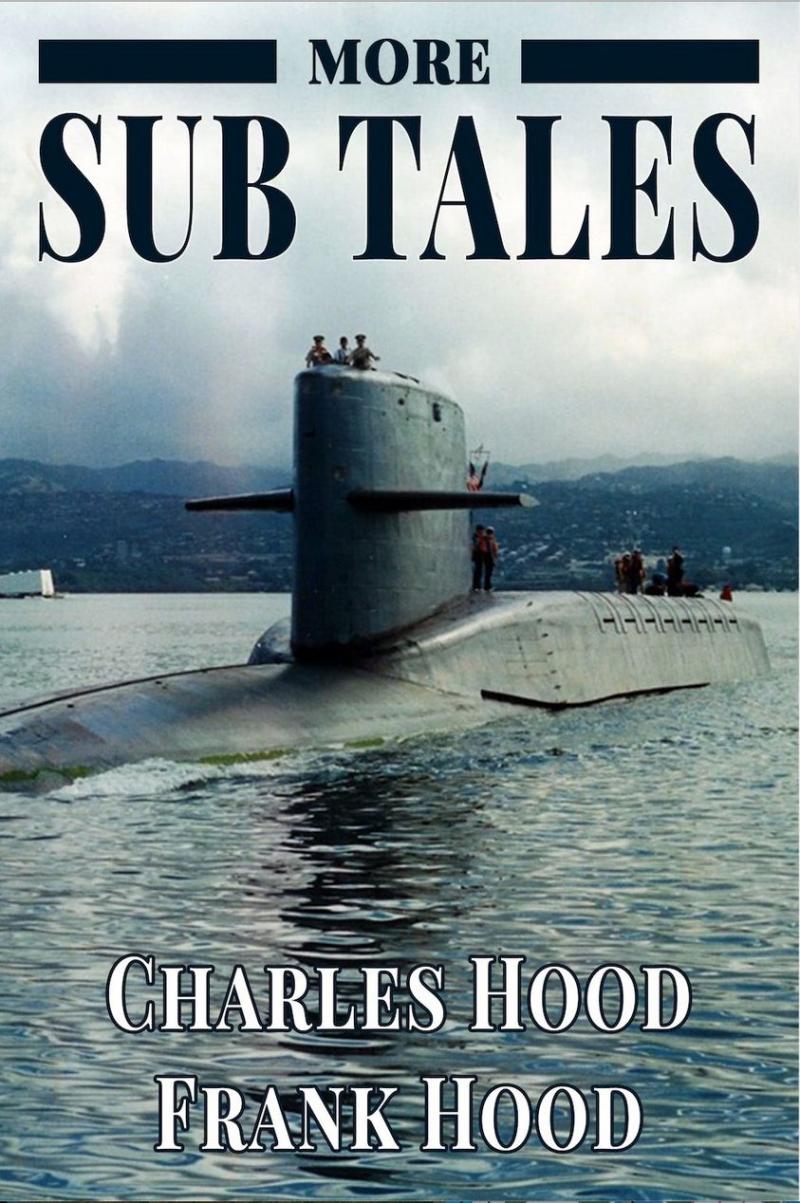 Passes $44,000 Donated to Sub Vet Scholarship Fund.Nashua, NH - USA | January 7, 2021 -- This is newsworthy because two of the four books have been named as The Best Books About Submarines in the World for 2021. Poopie Suits was #6 in 2020. These are significant books that document the untold story of the men who manned the US Submarine Force during WWII, the Cold War, and the War on Terror. Each story is real.Poopie Suits has donated proceeds from the beginning to the United States Submarine Veterans, Inc. Scholarship Fund. Each book sold (soft cover or e-Book) generates a donation of $5 to this Fund. To date over $44,000 has been donated.One of many reviews on Amazon on the predecessor, Sub Tales – Stories That Seldom Surface:“Sub Tales is another truly fantastic book by the authors of Poopie Suits and Cowboy Boots. As I read story after story from submariners that exhibited grace and level headedness under pressure, I couldn't help but be impressed with those that volunteer their time, often thanklessly, so that the rest of us can rest securely under the blanket of freedom they help provide. This book is a paean to these warriors. We will never be able to fully appreciate the depth of sacrifice these individuals made because the very nature of their service precludes us from knowing the full measure of it. Sub Tales is deftly woven, engaging, and very much a page turner. I highly recommend it to anyone that is interested in the exploits of the extraordinary volunteers to the "Silent Service".All four titles contain riveting accounts of the triumphs and tribulations of the US Submarine Force. Each book features plenty of vintage photographs and personal recollections from the men who served. More Sub Tales joins the series with 36 new stories about the Silent Service, spanning more than a century of history from the experimental submarines conceived by Simon Lake in the late nineteenth century to the christening of the USS Hawaii (SSN-776) in 2006. Together these stories weave a compelling and instructive narrative of American submarines and the men who rode them.Richly illustrated with more than 350 photographs, More Sub Tales will entertain and inform the reader about key moments and milestones in the evolution of submarines. Learn about the many ordeals, sacrifices, and brave acts that represent the proud legacy of this underappreciated segment of our Armed Forces.Each story has been carefully vetted by more than two dozen veteran submariners for accuracy, and in most chapters, additional authenticity has been gained by interviewing actual participants. The book has been written with clear language, and explanations where relevant, to appeal to a wide-ranging audience.More than a year in the making, and involving hundreds of interviews and thousands of correspondences, this richly researched volume takes its rightful place in the expanding Poopie Suits series. Simply put, these books chronicle what makes the US Submarine Force one of the world’s elite military groups.About Poopie Suits Series of True Submarine Stories:The Poopie Suits series of books was created by 2 brothers, Frank and Charles Hood, who started by detailing the submarine service of Frank during the late 60’s to early 70’s. The first book, Poopie Suits & Cowboy Boots, takes the reader on the journey of a young man who volunteers for submarine service and includes historical and cultural touchpoints of the era, including the Vietnam War, political unrest and assassinations, the nascent space program, and more. Richly detailed by co-author Charles Hood and written in a language that anyone can understand, it focuses on true stories of daily life on a submarine.For more information, please visit www.subtales.com and www.thesilentservicespeaks.netFacebook: www.facebook.com/2hoodssubbook* Poopie Suits named #3 Best Book in the World on Submarines 2021 * Sub Tales named #5 in the World for 2021 https://bookauthority.org/books/new-submarines-ebooksPress & Media Contact: Frank Hood, Co-Author Poopie Suits Series Nashua, NH - USA +1 603-557-8329 https://subtales.comhttps://subtales.com

12-20-2021 | Leisure, Entertainment, Miscel …
Poopie Suits Series
Poopie Suits Announces Release of 1st Audio Book
Utilizing Audible’s Whispersync for Kindle Technology. Narrated by a Navy veteran who brings authenticity to the story through his own former submarine experiences. Nashua, NH - USA | December 17, 2021 -- Highly vetted by dozens of submarine veterans, Poopie Suits & Cowboy Boots tells the story of a young man coming to age during a time of great turbulence and change in our country. It follows him from Navy ROTC
08-25-2021 | Leisure, Entertainment, Miscel …
Poopie Suits Series
From WWII to the War on Terror - True Stories from Men Who Were There
26 unique perspectives that will take you deep into the ethos of the US Submarine Force. Nashua, NH - USA | August 24, 2021 -- The Silent Service Remembers (Vol. 2) is our fifth effort in the ever-expanding series of books that seek to capture the essence of the US Submarine Force. Featuring the stories, reminisces, and photographs of 26 authors, the volume represents the sequel to the first volume published
04-20-2021 | Leisure, Entertainment, Miscel …
Poopie Suits Series
Seahorse Rides Again in 5th Edition of Poopie Suits & Cowboy Boots
A Unique Look Into the Everyday Life Aboard a Nuclear Submarine. Nashua, NH – USA | April 19, 2021 -- Poopie Suits and Cowboy Boots, now in its fifth edition since 2017, has earned a popular place in the modern submarine literature for its engaging style and pacing, also for its unique approach. Cloak and Dagger suspense was set aside. As were strictly technical descriptions of submarine operations. Instead -it is

10-29-2020 | Arts & Culture
WordRevo
Book launch of “WordRevo Tales 2020: A World Without Borders”
FOR IMMEDIATE RELEASE WordRevo Tales 2020 - A short story collection ON SALE: 30 OCTOBER 2020 For more information or review copies: prize@wordrevo.com. Book launch of “WordRevo Tales 2020: A World Without Borders” Rome, Italy – 29 October 2020 – The project was born in lockdown Italy, at perhaps the toughest moment of a pandemic that continues to ravage the entire world. The chosen theme, “A World Without Borders”, is a reaction to the current
03-15-2019 | Advertising, Media Consulting, …
tikkustravelthon.in
Anuj Tikku Launches his third book Travelthon Tales
Travelling is the best way to learn and grow in life but it is also important to be observant as well as aware of your surroundings. Watch the view as your journey unfolds along the vast roads, mountains and peaks. Under the sea, a world unexplored opens up – all blue and colorful, neon and bright, the world beneath the sea is a true delight. I enjoy this rush of
03-29-2018 | Arts & Culture
York Fine Arts
York Exhibition Explores 'Tales of the Sea'
York Fine Arts is delighted to announce the gallery’s newest exhibition of 2018. 'Tales of the Sea' brings together an exhilarating collection of original paintings from some of Britain’s leading marine artists. From soft, sandy shores to the magnificent wilderness of the open ocean, this new exhibition celebrates the simultaneous familiarity and adventure of the sea. With a dazzling array of seafaring scenes, both traditional and contemporary, there are myriad
05-16-2011 | Arts & Culture
Goodnight Kiss Music
Musical Comedy 'Tales of Osama' Makes Bin Laden a Joke
Controversial upon its first release, "Tall Tales of Osama Bin Laden" has now emerged as a comedy album. When music publisher Janet Fisher of Goodnight Kiss Records produced the album back in 2004, she had no idea that the recording would have new significance seven years later. Now that the infamous terror leader has been dispatched, the album is enjoying new life as a party recording. People are having barbecues and
01-14-2011 | Arts & Culture
Galerie ADLER
Susanna Majuri - Nordic water tales
OPENING RECEPTION Friday, January 21st, 2011, 7 pm ADLER - FRANKFURT AM MAIN January 22nd – March 5th, 2011 “I want to show that one can find the fantastic from nearby. Fiction blends into our life. The imaginary is in fact actual.” Stories are a wonderful thing! You can lose yourselves in them, assume a different form or personality – and yet, in every fairy tale there is a grain of truth. Finnish photo
11-09-2010 | Media & Telecommunications
MMORPG
Tales of Fantasy: Lucky Shoehorses
In Tales of Fantasy, where an added edge in battle can ascertain to be the difference between life and death, it's essential to make sure your horse is equipped with a set of good horseshoes to further augment and improve their abilities! It's not as universally known nowadays, but hundreds of years ago it was common knowledge that a good horse wasn't worth much without a good set of horseshoes. Ever
Comments about openPR
OpenPR is clearly structured and remains true to its principle of confining itself to the essential parts. OpenPR has proven to be a very good and reliable partner to our media agency: Within the shortest time the releases are online and go down well with the media representatives. The success of OpenPR is reflected in the steadily increasing number of press releases. It is good that OpenPR exists!
Ursula Koslik, Director Marketing & PR, F+W Hamburg