World Premiere of "This Sacred Place" to Stream for Free Jan. 2 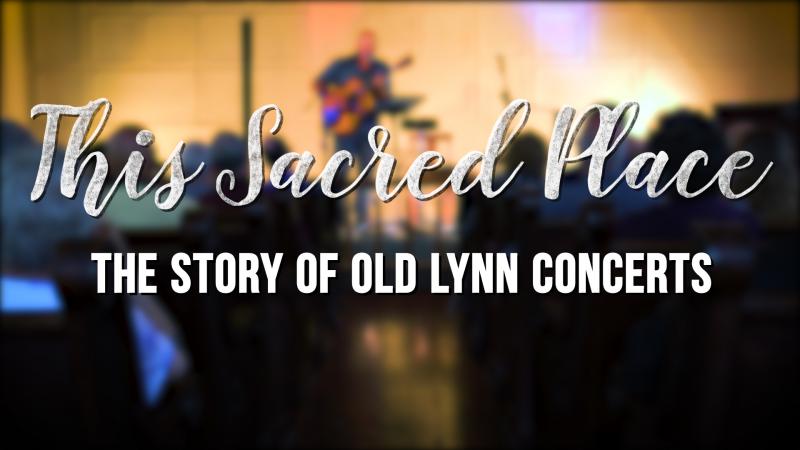 "This Sacred Place: The Story of Old Lynn Concerts"

Back in 2019, suburban Chicago history teacher Bruce Janu packed his car with camera equipment and headed on a road trip to Lynn, Pennsylvania. His task: document the last concert of the famed "Old Lynn Concert Series."He wasn’t the only out-of-towner to attend this concert. Others came a long way for the show --- as far away as Idaho.But this place is not on a map. Lynn is at a crossroads in rural Susquehanna County, Pennsylvania. Blink and you will miss it. The unusual concert venue was the Methodist Episcopal Church of Lynn built in 1883. This church was known for its musical presentations throughout the years. That tradition was continued in 2000 when the old church was turned into a concert hall. Despite its location in rural Northeastern, Pennsylvania, the Old Lynn Concert Series managed to bring in some of the most acclaimed acoustic folk artists from all over the world. Renowned singer-songwriters such as Jez Lowe, Bob Warren and Michael Jerling were among those to grace the Old Lynn stage over the years. During its nineteen-year run, the series presented over 150 free concerts to the community and beyond."This Sacred Place: The Story of Old Lynn Concerts" presents the history of the series along with footage from the grand finale, featuring singer-songwriters Lorne Clarke, Tom Flannery, and former Badlees guitarist Bret Alexander. Before hitting the festival circuit next year, "This Sacred Place" will have its world premiere on Saturday January 2, 2021 at 7:30 pm, Eastern. The film will be streamed for free online via Scener. Janu, Clarke, Flannery and others will be on hand virtually to introduce the film, talk about the series and answer questions from the online audience. “As the Old Lynn Concert Series was a free event,” explains Janu, “we wanted to honor that tradition by first presenting the film to the world in the same way.”More information about this event can be found at http://www.bellbookcamera.com.https://scener.com/bbcp?eventId=41805Bell, Book and Camera Productions info@bellbookcamera.com 224-357-6214 http://www.bellbookcamera.comBell, Book and Camera Productions was founded by high school history teacher, Bruce Janu in 1998 with the purpose of creating quality media and educational content that informs, enlightens and inspires.

You can edit or delete your press release World Premiere of "This Sacred Place" to Stream for Free Jan. 2 here

11-13-2020 | Arts & Culture
BookBuzz.net
Author B. Lynn Goodwin Releases New Young Adult Novel - Talent
Author B. Lynn Goodwin Releases New Young Adult Novel - Talent Author B. Lynn Goodwin is pleased to announce the release of her new young adult novel, Talent. Released by Koehler Books on November 1, 2020, the book is already receiving rave reviews from readers and reviewers. Sandee Mason is convinced her life will change if she can just win applause for her talents-whatever they may be. She can't wait to
05-12-2011 | Health & Medicine
Erickson Living
Lynn Keefe Joins Greenspring as the Community’s Associate Executive Director
SPRINGFIELD, VIRGINIA – On May 9, 2011, Lynn Keefe joined Greenspring as the Associate Executive Director for the retirement community. Keefe has over 20 years of progressive experience working with non-profits and comes to Greenspring from the American Red Cross. “I am extremely pleased to welcome Ms. Keefe to Greenspring,” said Robin Gliboff, Greenspring’s Executive Director. “Her extensive leadership experience and proven dedication will undoubtedly guide her in making
11-19-2010 | Leisure, Entertainment, Miscel …
Bonaparte Press
New Release from Lynn Carmer
Bonaparte Press is excited to announce the October 2010 release of Lynn Carmer's new Paranormal Romance, Fervor. Fervor is now available at Amazon.com, Smashwords.com. Fervor will be available for IPad, Sony & the Nook soon. More information about Lynn Carmer and additional titles from Bonaparte Press can be found at: www.bonapartepress.org. Bonaparte Press is an Independent Small Press in the rolling mountains of West Virginia. We publish genre fiction; Romance, Science Fiction,
09-30-2010 | Leisure, Entertainment, Miscel …
AristoMedia
Loretta Lynn Honored by Artists, Industry at 50th Anniversary Event
(Nashville, Tenn. – Sept. 28, 2010) Country music icon Loretta Lynn was showered with an assortment of industry awards and heartfelt praise at her invitation-only 50th anniversary celebration, held at Lynn’s Hurricane Mills ranch on Friday, Sept. 24. The Academy of Country Music®, Country Radio Broadcasters, Inc.® and BMI® each made presentations during the evening’s event. Billed as “A Tribute to an American Icon,” the celebration honored Lynn’s 50 years
06-04-2009 | Energy & Environment
ZeitEnergy
Lynn Hughey to Lead ZeitEnergy's Construction Management Team
Dallas, TX, June 03, 2009 / -- ZeitEnergy, LLC., a leading provider of CNG fueling solutions in Texas and Nationwide, announced today the addition of Lynn Hughey to lead ZeitEnergy’s Contracting, Construction Management, and Construction Consulting efforts throughout the United States. Mr. Hughey comes to ZeitEnergy with over twenty years of direct experience overseeing CNG station construction and is well known throughout the industry. “Municipalities and Private Fleet Owners with
10-09-2007 | Politics, Law & Society
Lynn Tillotson & Pinker, L.L.P.
Lynn Tillotson & Pinker Partners Among America’s Top Attorneys
DALLAS – Lawdragon, a quarterly print and online publication serving the legal community, has named Michael P. Lynn and Eric W. Pinker of Lynn Tillotson & Pinker, L.L.P., as two of the 500 Leading Lawyers in America. This marks the second consecutive year for Mr. Lynn to be included on the listing of the nation’s top attorneys, and Mr. Pinker was honored earlier this year among the Lawdragon 500 Leading Plaintiffs’
Comments about openPR
Your portal is fast, simple, and easy to use. Others may have more functions but they also demand more editing time, you have to preformat the text in order to achieve a good result etc. I think openPR is really fantastic!
Andreas Knepper, wallmedien AG