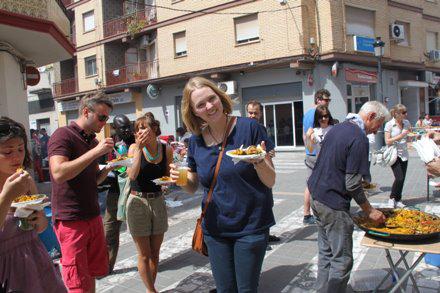 Paella-Competition including a free spanish lesson in Cheste The language students of Valencia attend a Paella-FestivalValencia. Past saturday spanish language students from Valencia and other Paella-Lovers swarmed out to the little village called Cheste for actively participating on the Paella-Competition or just to enjoy spains culinary showpiece in circles of families and friends.Everybody can participate on the Paella-Competition which takes place twice a year to search out the best paella cook. The little village Cheste is located 26km away from Valencia and it is easy to get to by train or car.Spain’s language students just could not resist and actively participated on this spectacle. The streets of Cheste were crowded by cooking teams consisting of family members and friends, who put a lot of effort in letting the fire stay alive under their big steaming Paella-Pans.Because one rule of the Paella-Competition is you need to cook your Paella under the open sky and on an open fire, which is not as simple as it sounds. So all the language students, who arrived with their language school Costa de Valencia, put much effort in keeping the fire output.For the locals are events such as the Paella-Competition great opportunities for having the family and friends come together, eat together and just enjoying the atmosphere of the hustle in the streets. Cooked is the “Paella Valenciana”, which contains only tavella, garrofon, tomatoes, mountain snails and of course bomba-rice.The language students did the same and enjoyed that sunny day, paella and cooled themselves down with some cold sangria. It was a great opportunity for them to use and improve their new language skills by getting in contact with other students. Also it was a chance to get a close view of the locals way of live and their traditions. It did not take long and the interpersonal barriers were open and the language students celebrated that special day with each other as close friends.At nightfall the students of the language school Costa de Valencia and the locals started to clean up their cooking places and loaded all their cooking instruments in their cars, so they could get a last chance to relax by getting a coffee before the night should start.A great live band was playing and everybody was dancing until deep into the night under a clear sky, everybody had a great time with a lot of laughter and there were taken a lot of pictures by the students of the language school Costa de Valencia so they will remain this day a long long time.Costa de Valencia, Spanish language school, is recognized by the Instituto Cervantes as "preparation centre for the Spanish as foreign language exams (DELE)".Since 1995 Costa de Valencia, escuela de espanol has specialized in the teaching of Spanish as a foreign language and therefore they select their teaching staff carefully. Spanish lessons at Costa de Valencia are given according to the most updated and effective teaching methods.Costa de Valencia, S.L. Av. Blasco Ibáñez, 66 E-46021 Valencia Tel (+34) 963610367 Fax (+34) 963936049 www.costadevalencia.com

06-06-2017 | Leisure, Entertainment, Miscel …
Costa de Valencia S.L.
Learn Spanish in a modern and entertaining way
Valencia. In Spain, there are many organizations, academies and schools which share the same objective: making it possible for everyone to get to know the various languages and cultures of the country through their Spanish lessons since the Spanish language is in full development and it represents one of the most important languages in the world spoken by 400 million people. Among the most influential institutes which are working on disseminating
09-02-2016 | Tourism, Cars, Traffic
Costa de Valencia S.L.
Between battle and fun – the Tomatina, an event like no other
Spanish language students from Valencia participate in the battle with tomatoes which is known all over the world Valencia. On the last Wednesday of the month August the Valencians celebrated the Tomatina for the 71st time. At said celebration the participants throw tomatoes at each other for one hour. This does not only sound crazy, in reality it is crazy as well: complete strangers crush the overripe fruits on the heads
07-25-2011 | Leisure, Entertainment, Miscel …
Costa de Valencia S.L.
Picassent - learning the language in Spanish classes and discovering Spanish cul …
Students of a Spanish school went to Picassent to discover one of the most typical spanish events – fiesta de los toros (bull running festival). Valencia. Last Saturday, after whole week of Spanish classes, new students from a Spanish school in Valencia have gone to Picassent, a municipality of Valencia, to participate in the traditional festival of the bulls running. It is one of the most impressive events: dynamism and
03-16-2011 | Science & Education
Costa de Valencia S.L.
Bike ride till the Albufera Lagoon Nature Park to practice Spanish
Students from a Spanish school in Valencia enjoy a byclicle ride through El Saler beach and La Albufera Valencia. Good wheather is now closer and a journey by bicycle is a good way to know Valencia, because every opportunity is a good chance to discover the most important nature areas just a few kilometers away from the city. It’s even better if the foreigner students are able to practice Spanish. Costa de

08-23-2017 | Tourism, Cars, Traffic
Hilton Pattaya
Experience a Wide Selection of Mantis Shrimp Dishes at Hilton Pattaya
Hilton Pattaya presents ‘Mantis Shrimp’, local ingredient of the month which is mostly found in the Gulf of Thailand and the Andaman Sea. It is normally served steamed, grilled or deep fried with garlic and peppers. If you are looking for something different, Hilton Pattaya invites you to experience a wide selection of Thai, Asian and Western mantis shrimp menus throughout the month of August. ‘Flare’ Restaurant presents ‘Singapore Noodles’, fried
06-06-2017 | Leisure, Entertainment, Miscel …
Costa de Valencia S.L.
Learn Spanish in a modern and entertaining way
Valencia. In Spain, there are many organizations, academies and schools which share the same objective: making it possible for everyone to get to know the various languages and cultures of the country through their Spanish lessons since the Spanish language is in full development and it represents one of the most important languages in the world spoken by 400 million people. Among the most influential institutes which are working on disseminating
07-14-2016 | Tourism, Cars, Traffic
Costa de Valencia
A great insight of the Spanish Fiesta was given midst the heat of the bulls
Language students from Valencia in the middle of a Spanish adventure. Valencia. If you ask students of a Spanish language school what comes into their minds when thinking of Spain, many answers are given: sun, beach, Fiesta – and of course bulls or in Spanish “los toros”. However, the traditional bull fights are not the only thing meant by that. In Valencia, for example are days were the so-called running
09-18-2013 | Tourism, Cars, Traffic
Costa de Valencia, S.L:
A Spanish-language school in Valencia attracts every day more students from Asia
With the amplification of the web page for the languages Japanese and Chinese more and more language students from Asia are going to come to Valencia for learning Spanish. Valencia. The access to the necessary information about a Spanish-language school and its offers is going to be easier for the Asiatic region in the future as well. Until now most of the potential Spanish-language students from Europe, America and Australia
12-22-2011 | Tourism, Cars, Traffic
Frontier Holidays Ltd
Frontier Holidays launches the Andalucian International Walking & Cultural Festi …
Frontier Holidays are hosting the Andalucian International Walking & Cultural Festival in co-operation with the Town Hall of El Burgo and the Sierra de las Nieves Nature Park. This event will take place from February 26th to March 4th and promises to be an unforgettable holiday experience. The white mountain village of El Burgo, close to Sierra de las Nieves Nature Park is the glorious setting for the festival. This area
09-22-2010 | Leisure, Entertainment, Miscel …
Jolson Creative
''The Echo Center'' Celebrates 10 Years at Gala Event - Celebrity VIP Lounge hos …
Los Angeles, CA (September 20, 2010): Adam Scott, star of NBC’s Parks and Recreation, is set to host the 10 Year Anniversary of The Center for Nonviolent Education and Parenting (CNVEP) on Oct. 2, 2010. Joined by his wife Naomi, the evening will celebrate a remarkable 10 years of success and the launch of the non-profit’s new name, The Echo Center. Special guests will walk the Red Carpet in support
Comments about openPR
9 o'clock: discuss press release with client, 10 o'clock: submit release to openPR, within the briefest possible time release is published and displayed in a prominent place on openPR.de. I am thrilled!
Zehra Spindler, Calypso Now! - Communication Agency