Learn Spanish in a modern and entertaining way 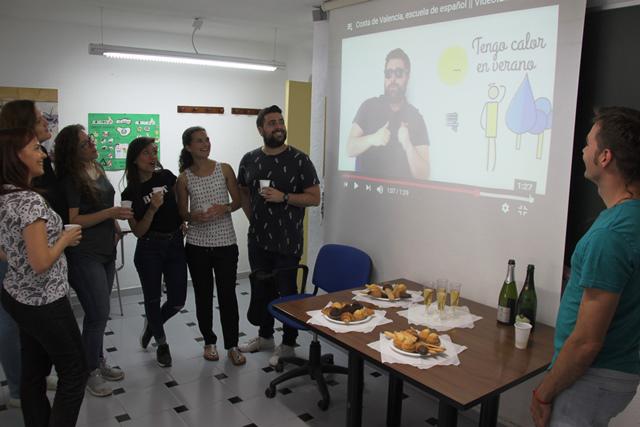 Presentation of the first video tutorial

Valencia. In Spain, there are many organizations, academies and schools which share the same objective: making it possible for everyone to get to know the various languages and cultures of the country through their Spanish lessons since the Spanish language is in full development and it represents one of the most important languages in the world spoken by 400 million people.Among the most influential institutes which are working on disseminating the Spanish language is the Cervantes Institute, a public body established in 1991 in Spain to promote the teaching, studying and using of the Spanish language and to contribute to popularizing the Hispanic cultures outside of Spain. The institute has 87 locations spread over 44 countries on all five continents, including two sites in Spain: the head quarter in Madrid and another site in Alcalá de Henares.The teaching of Spanish as a foreign language is indeed becoming increasingly important outside of Spain. Social-political and cultural reason for studying Spanish become as well more and more relevant. One of the centers accredited by the Cervantes Institute is the Spanish school Costa de Valencia, which is offering Spanish courses for more than 20 years, all year long and for all language levels. Besides classes the school organizes many extracurricular activities and trips, in which the students can put their Spanish knowledge into practice in a relaxed atmosphere with other learners. Furthermore the school has decided to use social networks for publishing a new project consisting of a series of video tutorials. In the videos teachers of the school give explanations about the Spanish language on all levels: grammar, vocabulary and pronunciation. Thus everyone can take the chance to learn some of the basic rules of this interesting language – in a modern and entertaining way.The project was officially presented at a celebration organized by the school, where the students and teachers enjoyed a great time full of music, eating Paella and talking in the same language: Spanish. The highlight of the event was the publication of the first video tutorial on the social network YouTube. The next two are ready to be released at the end of June and in the middle of July, respectively.You can already watch the first video on the YouTube account of Costa de Valencia!Since 1995 the language school Costa de Valencia has focused on teaching Spanish to non-native speakers. This language school, which is situated in the heart of Valencia, is a Centro Acreditado of the Instituto Cervantes and a member of many associations. The teaching material, which is used during the lessons, is worked out by a team of well-versed teachers. One of the most important aspects of teaching in this school is the individual involvement of every single student. This way every student has the possibility to speak a lot during the language course. Furthermore, both managers attach great importance to the quality of the language lessons and a broadly diversified leisure programme.Costa de Valencia, S.L. Andreas Tessmer Avda. Blasco Ibáñez, 66 E-46021 Valencia Tel.: (+34) 96 361 03 67 Fax: (+34) 96 393 60 49 info@costadevalencia.com www.Costadevalencia.com

09-02-2016 | Tourism, Cars, Traffic
Costa de Valencia S.L.
Between battle and fun – the Tomatina, an event like no other
Spanish language students from Valencia participate in the battle with tomatoes which is known all over the world Valencia. On the last Wednesday of the month August the Valencians celebrated the Tomatina for the 71st time. At said celebration the participants throw tomatoes at each other for one hour. This does not only sound crazy, in reality it is crazy as well: complete strangers crush the overripe fruits on the heads
05-10-2012 | Arts & Culture
Costa de Valencia S.L.
Las Paellas in Cheste
Paella-Competition including a free spanish lesson in Cheste The language students of Valencia attend a Paella-Festival Valencia. Past saturday spanish language students from Valencia and other Paella-Lovers swarmed out to the little village called Cheste for actively participating on the Paella-Competition or just to enjoy spains culinary showpiece in circles of families and friends. Everybody can participate on the Paella-Competition which takes place
07-25-2011 | Leisure, Entertainment, Miscel …
Costa de Valencia S.L.
Picassent - learning the language in Spanish classes and discovering Spanish cul …
Students of a Spanish school went to Picassent to discover one of the most typical spanish events – fiesta de los toros (bull running festival). Valencia. Last Saturday, after whole week of Spanish classes, new students from a Spanish school in Valencia have gone to Picassent, a municipality of Valencia, to participate in the traditional festival of the bulls running. It is one of the most impressive events: dynamism and
03-16-2011 | Science & Education
Costa de Valencia S.L.
Bike ride till the Albufera Lagoon Nature Park to practice Spanish
Students from a Spanish school in Valencia enjoy a byclicle ride through El Saler beach and La Albufera Valencia. Good wheather is now closer and a journey by bicycle is a good way to know Valencia, because every opportunity is a good chance to discover the most important nature areas just a few kilometers away from the city. It’s even better if the foreigner students are able to practice Spanish. Costa de

11-23-2016 | Tourism, Cars, Traffic
Costa de Valencia, S.L:
Preparation for Spanish exams
To learn Spanish intensively during one week means living a week full of unforgettable events Valencia. For many students it is no pleasure to think about the final exams. Everything is coming so fast, and you would just prefer to forget all about it. Am I ready for this? When do I need to start to study? Will I still have leisure time? Such questions go through your head, even though
03-08-2011 | Science & Education
Costa de Valencia, S.L:
Learning Spanish with children
A Spanish language school in Valencia organizes during Eastern holidays Spanish courses for parents and their children Valencia. The upcoming Eastern holidays offer the whole family the chance to learn the Spanish language. A Spanish school in the centre of Valencia offers the perfect combination for a family holiday: language training for parents and introductory Spanish for children. The parents attend an intensive Spanish course to learn in a short time as
02-28-2011 | Science & Education
Costa de Valencia, S.L:
Business Spanish
A school of Spanish for foreigners organizes courses of Business Spanish in preparation to the Official Exams of the Chamber of Commerce and Industry of Madrid. Valencia. Knowing a language also means to know specific vocabularies. The aim of most students of Spanish as a foreign language is not only that of improving their fluency, but also that of widening their vocabulary in specific areas that will be useful for finding
02-28-2011 | Science & Education
Costa de Valencia, S.L:
The true Spanish for foreigners
A school of Spanish for foreigners offers its students extra-activities and classes: colloquial Spanish and reading clubs. Valencia. It has been proved that studying a language just in class is not enough to learn it. A Student of Spanish as a foreign language needs not only the grammar, but a full everyday immersion into the language in order to learn those expressions that can’t be found in books. It is important to
02-21-2011 | Science & Education
Costa de Valencia, S.L:
Teaching Spanish as a Foreign Language
A Spanish school in Valencia organizes courses for future teachers of Spanish as a Foreign Language. Valencia. Being a Spanish native speaker doesn’t mean that you are able to teach your language. In order to teach a language, it is not only important to be a native speaker, but also to know how to teach it. Teaching a language requires a series of basic skills that enable you to teach
02-25-2010 | Business, Economy, Finances, B …
Workplace Spanish, Inc.
Workplace Spanish® Introduces “Spanish by the Slice™”
Roswell, GA, February 24, 2010 – Workplace Spanish, Inc., developer of the country’s most widely used Spanish learning materials for the workplace, introduces an economical way for anyone to learn and speak conversational and job-specific Spanish without busting their budget. “Spanish by the Slice™ is a parallel to the pizza business”, says Tom Sutula, president of Workplace Spanish. “With pizza, if you don’t want the whole pie—you order
Comments about openPR
9 o'clock: discuss press release with client, 10 o'clock: submit release to openPR, within the briefest possible time release is published and displayed in a prominent place on openPR.de. I am thrilled!
Zehra Spindler, Calypso Now! - Communication Agency