Press release from: The Mahlstedt Gallery 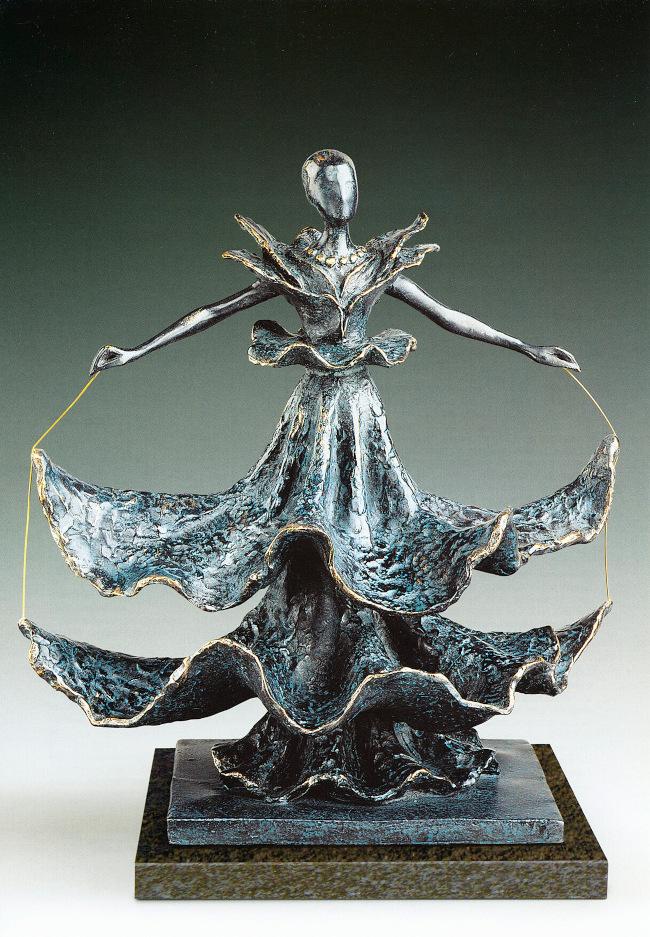 New Rochelle, NY, USA, December 3, 2020 -- The Mahlstedt Gallery, a leading brick and mortar and online fine art gallery in suburban Westchester County, New York, has entered into a collaboration with the famous Swiss art gallery Galerie Alexander E. Räber in Zurich, one that allows the Mahlstedt Gallery to represent a rare and extensive collection of limited-edition, bronze sculptures that are numbered by the renowned Spanish surrealist Salvador Dalí (1904-1989). The Mahlstedt Gallery will fill orders for the sculptures from buyers across all of North America.

“It is our privilege to provide Dalí’s works to collectors, interior designers and art enthusiasts throughout North America,” said Oshi Rabin, founder and owner of the Mahlstedt Gallery and herself an artist. “Buyers can be certain that each work is one of a limited number created by one of history’s preeminent artists. These sculptures are limited editions; just 350 of each exist.”

A few of Salvador Dalí’s iconic sculptures available through the Mahlstedt Gallery include the following:

- Profile of Time, featuring Dalí’s iconic melting clock motif first seen in his famous painting The Persistence of Memory. The sculpture presents a watch whose face is highlighted with green patina and is liquefying from its perch on top of a tree branch.

- Adam and Eve, a work in which Dalí captures the moment Adam is deciding whether to take the apple from Eve. Between the two figures, the serpent expectantly looks to Adam while coiled in the shape of a heart. Dalí explores religion in many of his works.

- Two bronzes each boast a vibrant blue patina. The flamenco dancer depicted in Dalinian Dancer is surrounded by the swirling fabric of her blue dress. In Triumphant Angel, an angel throws its head back and trumpets its horn towards the sky.

In addition to the Dalí works, the Mahlstedt Gallery will also represent other renowned artists through the collaboration with Galerie Alexander E. Räber. They include Paul Wunderlich (German, 1927-2010), who was influenced heavily by Dalí’s work, and Bruno Bruni (Italian, b. 1935), whose work is influenced by Paul Wunderlich. Both artists have carved out successful careers of their own.

“Both of these talented and accomplished artists are largely unknown in North America,” Ms. Rabin said of Wunderlich and Bruni. “We are excited to introduce these masters of the Old World to emerging collectors of the New World. They provide a fine complement to the Dalís.”

Wunderlich’s sculptures were heavily influenced by Dalí’s work, as seen in A Game of Chess. The bronze chess set created by him features chess pieces in surreal human forms that are patinated black and gold. A tall chess table is made of walnut and myrtle. Optional to purchase are two leather chairs. The work was previously sold by the esteemed auction house Sotheby’s.

Bruno Bruni’s work often focuses on the nude female figure, as can be seen in his three bronze sculptures at the Mahlstedt Gallery. La Sorella, which translates to “the sister,” shows a woman seated on a diabase stone pedestal, hugging her legs with her head between her knees.

Zeus the Conqueror depicts a woman lying supine on the back of a bull. The scene calls to mind the Greek myth in which the god Zeus seduces Europa in the form of a bull. Venere Assoluta shows a woman standing on a diabase stone base, removing clothes from over her head.

Another artist represented by the Mahlstedt Gallery is the Italian-Swiss artist and athlete Alfredo Battistini (1953-2008). His sculpture titled Mondo Elefanti depicts a herd of elephants facing outward while forming a tight circle. The elephants stand inside of the top and bottom half of a solid sphere.

Buyers can visit the Mahlstedt Gallery at 415 Huguenot Street - New Rochelle, New York 10801 by appointment only. Their entire gallery can be viewed online and purchases can be made at www.art415ny.com. For more information, call 914-246-0526 or e-mail info@art415ny.com.

The Mahlstedt Gallery is a full-service art gallery based in New Rochelle, N.Y. The gallery is located in a historic, neoclassical, two-story structure originally built in 1920 for the J. A. Mahlstedt Lumber and Coal Company. Since its founding in 2012, the Mahlstedt Gallery has been providing an art-buying experience that is easy, affordable and accessible for everyone. Even with the Mahlstedt Gallery’s new high-profile additions, their mission to provide accessible art remains. Buyers can find affordable, quality works from respected artists at the gallery. This includes sculptures by Swiss artist Rolf Ziegler (b. 1955) and Ukrainian artist Igor Grechanyk (b. 1960), as well as paintings by Italian-Swiss artist Pasquale Gigliotti (b. 1957) and American artist Maurice Sapiro (b. 1932), whose Turner-inspired work is exclusively represented by the Mahlstedt Gallery. Buyers can visit the Mahlstedt Gallery at 415 Huguenot Street - New Rochelle, New York 10801 by appointment only. Their entire gallery can be viewed online and purchases can be made at www.art415ny.com. For more information, call 914-246-0526 or e-mail info@art415ny.com.

08-22-2018 | Arts & Culture
Dali Berlin Ausstellungsbetriebs GmbH
“Dalí – The Exhibition at Potsdamer Platz” is part of the 38th Long Night …
Museum visitors can discover the numerous highlights of the museum individually or together with the Dali_Scouts during provided guided tours taking place hourly. Berlin, August 22nd 2018. "Dalí - The Exhibition at Potsdamer Platz", already existing in its tenth museum year, opens its doors once again at the evening of the Long Night of Museums to invite visitors to immerse themselves in the surreal world of Salvador Dalí until late at
10-10-2017 | Arts & Culture
Dali Berlin Ausstellungsbetriebs GmbH
Special exhibition “Salvador Dalí: The 21st Century Dandy. Man’s Fashion fr …
Berlin, October 9th 2017. Thanks to the great feedback with more than 30.000 visitors during the period of the very first special exhibition at the museum “SALVADOR DALÍ: THE 21st CENTURY DANDY – Man´s fashion from 1971–2017” will be extended until November 30th 2017. The special exhibition was opened due to the 10th anniversary of the Berlin Fashion Week this summer. After its extension, the exhibition will be on show for
07-07-2017 | Arts & Culture
Dali Berlin Ausstellungsbetriebs GmbH
Special exhibition Salvador Dalí: The 21st Century Dandy. Man’s Fashion from …
Special exhibition at museum ‘Dalí – Die Ausstellung am Potsdamer Platz‘ from July 7th to October 8th 2017 Berlin, July 6th 2017. In 1971 Salvador Dalí was commissioned by the internationally renowned menswear brand Scabal to design the first edition of the magazine Scarab to present his vision of men and fashion in the 21st century. On this occasion, Dalí designed 12 colorful watercolors, which served as templates for the Scabal designers
01-09-2012 | Arts & Culture
Maroma Press
New book reveals how US agents secretly aided Communist rebels
MADRID (Spain): AN AMAZING STORY of how American secret agents trained Spanish Communists to undermine Spain's pro-Nazi dictatorship is revealed in a newly released book. During World War Two the OSS (Office of Strategic Services) ran camps in North Africa where men were trained in guerrilla warfare then infiltrated into Spain to undermine the Franco regime. Spain was officially neutral but General Franco was actually aiding Germany's war effort. Details are revealed in
08-15-2011 | Leisure, Entertainment, Miscel …
Olive PR Solutions
September is "Arts Month San Diego"
Known for 70 miles of beaches and year-round mild weather, San Diego offers visitors arts and culture happenings that are just as dazzling as its Pacific Ocean views. During September, visitors can enjoy the vibrant local arts communities and help celebrate “Arts Month San Diego”. A month-long festival that celebrates the vibrancy and diversity of San Diego’s thriving visual and performing arts scene. San Diego, CA, August 12, 2011 --
07-04-2007 | Arts & Culture
Ketterer Kunst
Live Online Auction 07.07.07 - Picasso, Vasarely & Co. for less than € 1000
28.06.07 (aabykk) - art.auctions by Ketterer Kunst make it possible! On 7 July 2007, starting at 4 pm Central European daylight saving time, exciting works by internationally famous artists can be bought at the Ketterer Kunst live online auction Old Masters, Modern Art & Post War - and at very reasonable prices, too. Some 150 objects will be auctioned online for less than € 1000
Comments about openPR
OpenPR ist the nicest and most clearly laid out PR platform I have seen to this day. The press releases are displayed very nicely and clearly and without any unnecessary frills. The updates are fast and the finished release looks appealing and is clearly legible. Even with 16 years of experience one discovers new things from time to time. Congratulations!
Gabriele Ketterl, Director Marketing & PR, Menads