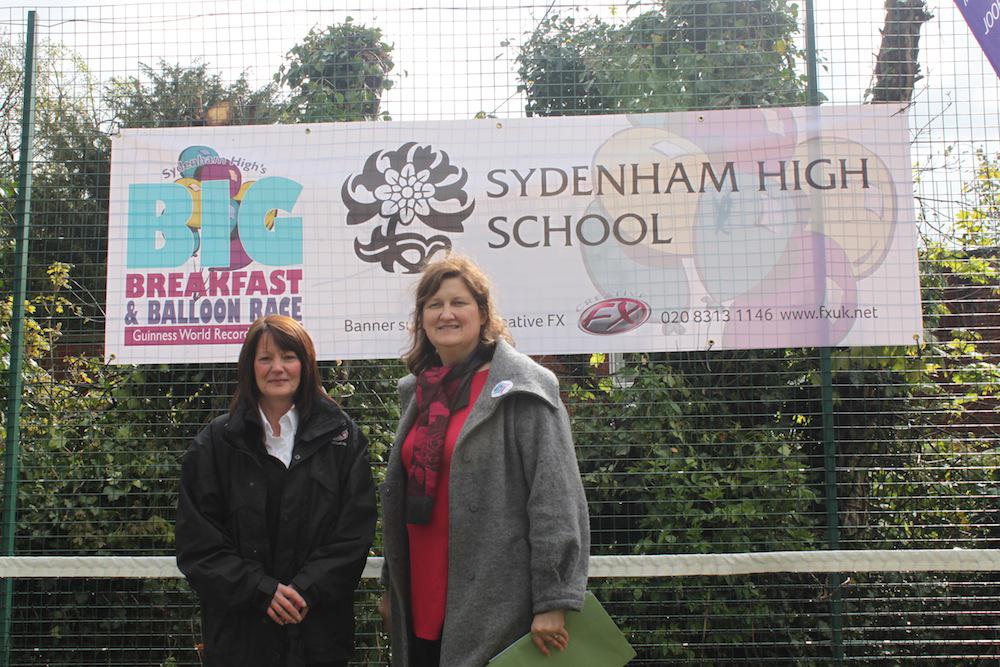 On Friday 27th April 2012, students and staff at Sydenham High School held a ‘Big Breakfast and Balloon Race’ to set the world record for the biggest cereal breakfast and release over 3,500 balloons to raise money for charity.The outdoors event, part of Sydenham High School’s 125th anniversary celebrations, took place on the school astroturf between 8 and 10am on Friday morning. 653 girls from the junior and secondary schools braved the weather to sit down together at 9am and officially break the Guinness World Record for biggest cereal breakfast. The record previously stood at just over 200 people.In a bid to raise money for the school’s anniversary charity, Sydenham High girls have been selling balloons to friends and family for the past few weeks in aid of Leukaemia Research, The Bone Cancer Research Charity and Teenage Cancer Trust. At 10am, after the record-breaking breakfast, 3,500 balloons were released, providing a spectacular sight in the Sydenham sky and raising over £9,000.Local signage specialists, Creative FX, have supported the event by buying plenty of balloons and producing a promotional banner. Creative FX Director, Trudy Pook, whose grand-daughter attends the school, was also at the event. “It is a great thing the girls have been doing and they’ve raised a fantastic amount of money! It’s nice for them to be able to do something different for charity and now they’ll always be able to remember it since they’ve made it into the Guinness Book of Records.”Showing his support for the charity fundraising, the Mayor of Lewisham also attended as witness to the cereal record-breaking attempt, along a with camera and film crew to capture the hundreds of balloons filling the sky.About Creative FXCreative FX is a Bromley-based signage and display company specialising in vehicle liveries and automotive services, as well as shop signs and digital wallpaper.We specialise in the design, production and installation of vehicle wraps for both the commercial and retail sectors. Any design can be used, from simple text and logo to a fully photographic vehicle wrap.As well as wrapping individual vehicles, the Creative FX team has also carried out projects for major car manufacturers, and has completed numerous special commission projects for events and charities, such as: Arsenal FC (Teenage Cancer Trust); Mazda (618 vehicles wrapped in Belgium); Skoda (Fastest 2 litre production car ever); and two chrome Audi R8s auctioned at Elton John’s White Tie and Tiara Ball for £620,000.Creative FX also provides stone chip protection and window tinting services, and is an authorised supplier of vehicle badging for a number of leading car manufacturers including Volkswagen Group, Audi UK, Nissan GB, Toyota GB, Subaru UK, Kia Motors, Hyundai UK and Renault UK.Sean Davis (Director) Creative FX145 Masons Hill Bromley Kent BR2 9HW+44 (0) 20 8313 1146 info@fxuk.net www.fxuk.net

06-14-2012 | Arts & Culture
Creative FX
Classic Phone Box Gets Creative Twist
This summer BT launches ‘BT ArtBox’ in support of ChildLine, a public art exhibition that will see Britain’s iconic red phone box transformed by some of the world’s most creative talent. Amongst the participants is experimental artist, Denis Masi, who, in collaboration with signage and display specialist Creative FX, has transformed a classic K6 telephone kiosk into a graphic work of art. Denis Masi is one of 80 famous faces and
06-05-2012 | Leisure, Entertainment, Miscel …
Creative FX
Creative FX Protect Audi Driving Experience
Vehicle wrapping expert, Creative FX, has collaborated with Audi to fit its high-performance fleet with Ventureshield stone chip protection to safeguard them on the manufacturer’s driving experience days. All three racing models, the Audi TT RS, RS 5, and R8 V10, used at the Silverstone Audi driving experience days, have been given attractive side panel graphics complete with Ventureshield stone chip protection to protect the slick cars from chips and abrasions. Ventureshield
05-08-2012 | Leisure, Entertainment, Miscel …
Creative FX
Creative FX helps Bar Italia Scooter Club Celebrate 10 years
Vehicle wrapping and signage specialist, Creative FX, is helping Bar Italia Scooter Club celebrate its tenth anniversary by producing banners and marketing material for its rideout events taking place in and around London throughout 2012. Founded in 2002 by Al Richmond, London's premier classic scooter club, Bar Italia is celebrating a decade of existence and is arranging a series of events and rideouts to mark the occasion. “2012 is going to
02-15-2012 | Fashion, Lifestyle, Trends
Creative FX
Creative FX give the Toyota iQ a Personal Touch
Vehicle wrapping specialists, Creative FX, have teamed up with Toyota to create a set of unique eye-catching decals for its iQ city car. The already distinctive Toyota iQ can now be made even more eye-catching with a range of six individual body and roof decals. Chosen when the car is purchased, designs include retro daises, aqua bubbles, classic monochrome checks and psychedelic swirls. They can be mixed and matched on the

12-19-2018 | Leisure, Entertainment, Miscel …
Sound Select
The Leading Online Sound Store in South Africa
Sound Select is a renowned online sound store in South Africa that has simplified the process of buying sound equipment. With the aim to cater to the varying needs of sound engineers, producers, DJs and music enthusiasts, they have a vast catalogue of products. The platform stocks a host of musical instruments like microphones, DJ gear and other accessories to ensure that their customers can browse an entire range of
10-01-2018 | Leisure, Entertainment, Miscel …
Sound Select
South Africa’s Leading Sound and Lighting Equipment Supplier
As an online audio store, Sound Select has always been committed to offering exceptional levels of service and provide their customers with the best possible value for their money. They have always been devoted to maintaining customer service excellence and competitive pricing and never compromise on product quality. Their team of experienced consultants work closely with clients to offer them the best solutions as per their requirements. They have been supplying
09-12-2012 | Leisure, Entertainment, Miscel …
Discount City Hotels
Avail To the Latest Offers by Apartotels.com for the Great River Race
Scheduled to be held on the 15th of September, The Great River Race is one of the upcoming events in the city of London .After the ending of the greatest sporting events-London Olympics. The Great River Race has returned with a huge number of participants this year. This sporting event is inspired by a charity event which was held in 1987.During this particular episode a barge rowed from Hampton Court
10-03-2011 | Business, Economy, Finances, B …
Sydenham Public Relations
Monetary Reform Right Around the Corner in the State of Utah
SALT LAKE CITY, Utah, September 30, 2011 -- A panel of sound money experts gathered at the Utah Monetary Summit in Salt Lake City, Utah, earlier this week for the purpose of paving the way for new monetary reform legislation in the State of Utah. "Gold and silver have been remarkable storehouses of value for thousands of years," said Reed Larsen, general manager of Old Glory Mint, a Utah-based mint
03-15-2011 | Tourism, Cars, Traffic
Apartotels.com Lists More Options of London Luxury Apartments to its Inventory
Apartotels.com Lists More Options of London Luxury Apartments to its Inventory
London, UK, March 15, 2011: Apartotels.com has added two new properties to its existing list of London apartments namely, The Ascott Mayfair Apartment and St. Marks Apartment located in Mayfair and Central London, respectively. Both of them are luxury apartments and offer world class facilities and personalized service to business and leisure travellers. These new inclusions have increased the number of London luxury apartments available in the existing list with
05-05-2008 | Tourism, Cars, Traffic
Discount City Hotels
Afternoon Tea at Grosvenor House - The Way to Indulge in the Cosmos of Tea
London, UK, May 1, 2008 DiscountCityHotels.net is delighted to introduce a new section, London Afternoon Tea, keeping in mind the popularity of afternoon tea in this part of the globe. With the introduction of Afternoon Tea, business and leisure travelers coming to the city can have the pleasure of tasting a wide variety of tea in a single place along with the luxury to indulge themselves in delicacies. DiscountCityHotels.net prides
Comments about openPR
We publish our press releases on openPR.de because we like people who are "open" - just like us.
Frank Obels, CEO, INCONET - Informationssysteme, Communication und Netzwerkberatung GmbH