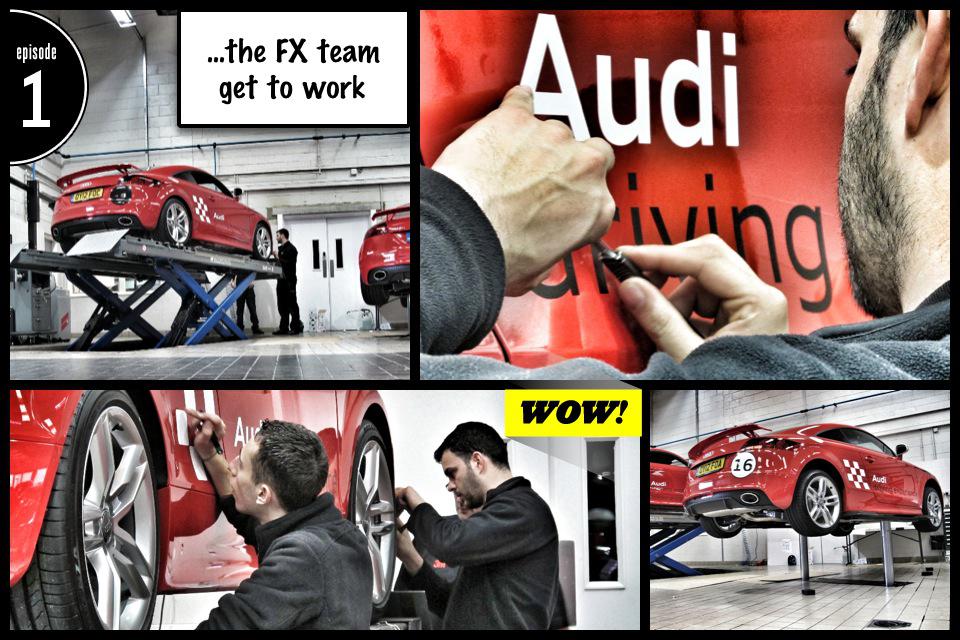 Vehicle wrapping expert, Creative FX, has collaborated with Audi to fit its high-performance fleet with Ventureshield stone chip protection to safeguard them on the manufacturer’s driving experience days.All three racing models, the Audi TT RS, RS 5, and R8 V10, used at the Silverstone Audi driving experience days, have been given attractive side panel graphics complete with Ventureshield stone chip protection to protect the slick cars from chips and abrasions.Ventureshield also acts as an invisible force against flying cones on the track. “The Audi experience days involve hard cornering, understeering and avoidance maneuver techniques,” explains Sean Davis, Director of Creative FX. “The durable film ensures that the iconic cars retain their beautifully streamlined finish, even if a driver hits a cone as they try to navigate around them.”The long-lasting, clear urethane film applied to both the bonnet and bumpers of the Audi cars, is designed to protect the most vulnerable of painted surfaces, making it perfect for high-speed, racing track days. Ventureshield stone chip protection produced by 3M is the strongest and clearest film on the market. “It may look like nothing, but that’s the point,” says Davis. “And since it withstands lubricants, oils and UV rays, the film can be washed and waxed like the rest of your vehicle.”Creative FX has worked with Audi for over ten years, “Over the years we’ve applied Ventureshield to a running total of around 80 experience cars” says Davis, “for each vehicle this invisible film is a vital safeguard and has ensured many of the cars stay in premium condition.”Whilst the Ventureshield is put through its paces on the Silverstone racetrack, Davis has noticed a sharp rise in the commercial use of Ventureshield stone chip protection by the regular motorist. “No-one likes getting a scratch or stone chip on their shiny new car. As well as the Audi cars, Ventureshield is also used by top race teams within Formula One, Fiat GT, NASCAR and A1 Grand Prix, but it’s not just a highly durable option, it’s an affordable one too. Creative FX Ventureshield kits start at only £295, so, it’s not surprising more and more people are turning to Ventureshield to protect their own vehicle’s precious bodywork,” he concludes.About Creative FXCreative FX is a Bromley-based signage and display company specialising in vehicle liveries and automotive services, as well as shop signs and digital wallpaper.We specialise in the design, production and installation of vehicle wraps for both the commercial and retail sectors. Any design can be used, from simple text and logo to a fully photographic vehicle wrap.As well as wrapping individual vehicles, the Creative FX team has also carried out projects for major car manufacturers, and has completed numerous special commission projects for events and charities, such as: Arsenal FC (Teenage Cancer Trust); Mazda (618 vehicles wrapped in Belgium); Skoda (Fastest 2 litre production car ever); and two chrome Audi R8s auctioned at Elton John’s White Tie and Tiara Ball for £620,000.Creative FX also provides stone chip protection and window tinting services, and is an authorised supplier of vehicle badging for a number of leading car manufacturers including Volkswagen Group, Audi UK, Nissan GB, Toyota GB, Subaru UK, Kia Motors, Hyundai UK and Renault UK.Sean Davis Creative FX 020 8313 1146 www.fxuk.net info@fxuk.netCreative FX 145 Masons Hill  Bromley  Kent  BR2 9HW

06-14-2012 | Arts & Culture
Creative FX
Classic Phone Box Gets Creative Twist
This summer BT launches ‘BT ArtBox’ in support of ChildLine, a public art exhibition that will see Britain’s iconic red phone box transformed by some of the world’s most creative talent. Amongst the participants is experimental artist, Denis Masi, who, in collaboration with signage and display specialist Creative FX, has transformed a classic K6 telephone kiosk into a graphic work of art. Denis Masi is one of 80 famous faces and
05-08-2012 | Leisure, Entertainment, Miscel …
Creative FX
Creative FX helps Bar Italia Scooter Club Celebrate 10 years
Vehicle wrapping and signage specialist, Creative FX, is helping Bar Italia Scooter Club celebrate its tenth anniversary by producing banners and marketing material for its rideout events taking place in and around London throughout 2012. Founded in 2002 by Al Richmond, London's premier classic scooter club, Bar Italia is celebrating a decade of existence and is arranging a series of events and rideouts to mark the occasion. “2012 is going to
05-03-2012 | Leisure, Entertainment, Miscel …
Creative FX
Creative FX help Sydenham High break World Record
On Friday 27th April 2012, students and staff at Sydenham High School held a ‘Big Breakfast and Balloon Race’ to set the world record for the biggest cereal breakfast and release over 3,500 balloons to raise money for charity. The outdoors event, part of Sydenham High School’s 125th anniversary celebrations, took place on the school astroturf between 8 and 10am on Friday morning. 653 girls from the junior and secondary schools
02-15-2012 | Fashion, Lifestyle, Trends
Creative FX
Creative FX give the Toyota iQ a Personal Touch
Vehicle wrapping specialists, Creative FX, have teamed up with Toyota to create a set of unique eye-catching decals for its iQ city car. The already distinctive Toyota iQ can now be made even more eye-catching with a range of six individual body and roof decals. Chosen when the car is purchased, designs include retro daises, aqua bubbles, classic monochrome checks and psychedelic swirls. They can be mixed and matched on the