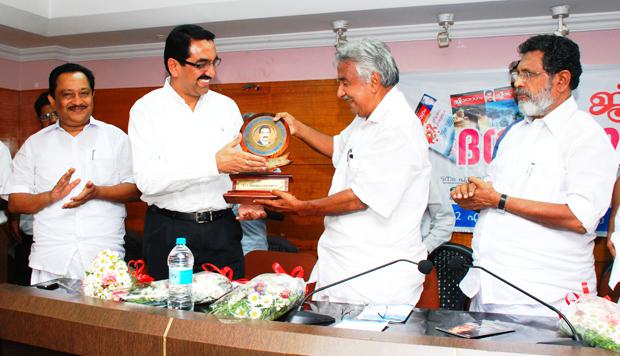 Mr. Y. Sudhir Kumar Shetty, COO – Global operations, UAE Exchange, was awarded the Jeevaragam Global Personality Award 2012 for his exemplary contributions to professional and socio-cultural arena. Mr. Shetty received this award from Mr. Oommen Chandy, Hon’ble Chief Minister of Kerala, India, at a glittering function held in Thiruvananthapuram, Kerala, on Wednesday, 25th April, 2012.Mr. Shetty is the driving force of UAE Exchange, the leading global remittance and foreign exchange brand, since over two decades. With Mr. Shetty, at the helm, the remittance major, grew from a single branch in Abu Dhabi, in 1980, to over 580 direct offices in 30 countries across five continents, which is the largest network among remittance brands. Under his leadership, UAE Exchange earned the trust of customers, partners and regulators, emerging into the ‘World’s Trusted Money Transferrer’.The success story was replicated in the case of Xpress Money too. The instant money transfer service became a favourite of millions of expatriates, world over. Mr. Shetty’s vision and foresight took the brand to new heights of success and in just over a decade, Xpress Money spread to 125 countries with over 135,000 agent locations.His profound understanding of the remittance industry, deep insights in to customer psyche and foresight clubbed with passion to excel, strong leadership and strategic skills, made the brands, leading entities.Mr. Shetty has a Fellow Membership in Indian Institute of Chartered Accountants, from where he completed his Chartered Accountancy. He also holds a degree in Law from the Mysore University, India. At Harvard University, USA, Mr. Shetty pursued the Key Executive Programme.An epitome of simplicity, Mr. Shetty lives by example. He associates with various executive and business councils in the UAE and beyond, who take pride on him being on board. This inspiring leader is also an eloquent speaker, who delivers speeches at various academic and professional gatherings, around the world. Far-sightedness and deep-rooted sense of ethics have made Mr. Shetty a trusted icon of sorts in the financial circles, towards whom the experts turn to, for advice. He is also very active in the socio-cultural arena.Mr. Shetty was among the select few eminent personalities, who were awarded for their contributions in various professional and socio-cultural streams. The awards commemorated the tenth anniversary of Jeevaragam magazine.About UAE Exchange UAE Exchange is a leading global remittance and exchange house based in UAE with, with direct ‎operations spanning 29 countries across five continents with over 600 direct offices. With ‎correspondent banking relationship covering more than 150 global banks, and associations with ‎many leading brands globally to bring several value-added products to customers, UAE ‎Exchange, acclaimed the world over as the ‘World’s Trusted Money Transferrer provides ‎unmatched service in the industry to a wide customer base of around 3.5 million. In UAE, the ‎brand has a leading presence with a network of over 101 branches covering all the Emirates. In ‎October 2009, UAE Exchange commenced its 30th year of successful business operations.Lahcen ATERTA Manager Media Relations UAE Exchange Centre LLC Al Saigh Building, Hamdan Street, PO BOX 170, Abu Dhabi, UAE Telephone: +971-2-4945480 aterta.lahcen@uaeexchange.com

10-04-2017 | Leisure, Entertainment, Miscel …
Sterling Media
THE GOLMAAL GANG IS BACK WITH NO LOGIC BUT MAGIC WITH “GOLMAAL AGAIN”!
The wait is finally over! The Golmaal gang are back with a bang with the Rohit Shetty directorial Golmaal Again, ready to spook fans across the world this 20th October! Presented by Reliance Entertainment in association with Mangl Murti Films and Rohit Shetty Picturez, Golmaal Again is Produced and Directed by action film supremo Rohit Shetty who has also conceived the story. Golmaal Again sees the return of the ensemble super-star
10-10-2012 | Arts & Culture
UAE Exchange
UAE Exchange and Soorya bring an enchanting evening of Indian dance forms
The multi-level mega show of a variety of Indian dance forms is conceptualised by Mr. Soorya Krishnamoorthy of Soorya Stage and Film Society. The show, organised by UAE Exchange, will be held on the 12th and 13th of October, 2012, in Abu Dhabi and Dubai respectively. Imagine an evening filled with rhythmic grace moving to soulful music. The art lovers of Abu Dhabi and Dubai will have such an evening with
01-26-2012 | Business, Economy, Finances, B …
UAE Exchange
UAE Exchange & Union Bank of India Launch Real-time Account Credit Service FLASH …
- Union Bank of India (UBI), the first public sector Bank in India to introduce FLASH Remit with UAE Exchange. The service shall be branded UNION FLASH Remit. - UBI customers to now experience instant credit to accounts “Indian expatriate customers to experience a revolutionary improvement in turnaround time for Account Credit!”, exclaimed Dr. B.R. Shetty, MD & CEO, UAE Exchange, while announcing the news of UAE Exchange and
04-18-2011 | Health & Medicine
I.I.C, Mumbai
Dr. Jitesh Shetty wins Leading Professionals of the World 2010 Award
Mumbai, India—April 18th 2011—Dr. Jitesh Shetty, one of the founding members of the Indian Institute of Cosmetology and the TVAM Skin Clinic has won the “Leading Professionals of the World 2010” award. The award was conferred to him by the University of Cambridge, UK for his outstanding achievements in the field of clinical cosmetology and aesthetic medicine. Dr. Jitesh Shetty who has won several awards in the past including “Man
01-06-2011 | Business, Economy, Finances, B …
UAE Exchange
UAE Exchange moves to new spacious premises in Musaffah Sector 10 Abu Dhabi
UAE Exchange, the leading global remittance and foreign exchange brand, today opened its new spacious and more convenient premises in Musaffah Sector 10, in a move to enhance the service and value proposition of the brand to its loyal customers in and around Mussaffah. The branch was inaugurated by H. E. Abdulla Humaid Ali Al Mazroei, Chairman, and Dr. B. R. Shetty, MD & CEO, UAE Exchange in the presence
07-02-2010 | IT, New Media & Software
Datamatics Global Services Ltd
Datamatics Global Services Appoints Shreedhara Shetty as President & Head, Globa …
Shreedhara will provide leadership with strong focus on growing our Tier-1 accounts and on increasing the revenue earned per account. •He will lead the sales team to open new accounts and grow existing accounts, strengthen sales processes and build strong customer relationships and customer centricity. Datamatics Global Services Limited, provider of smart, next-generation solutions that address the business challenges of customers globally, has announced the appointment of Shreedhara “Shree” Shetty as
Comments about openPR
OpenPR ist the nicest and most clearly laid out PR platform I have seen to this day. The press releases are displayed very nicely and clearly and without any unnecessary frills. The updates are fast and the finished release looks appealing and is clearly legible. Even with 16 years of experience one discovers new things from time to time. Congratulations!
Gabriele Ketterl, Director Marketing & PR, Menads