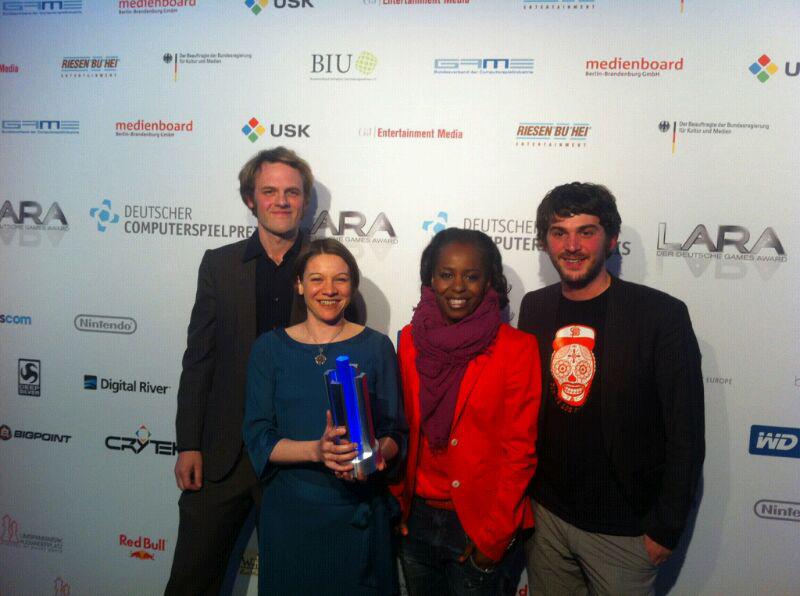 Berlin, April 26th, 2012. --- Berlin-based game developer kunst-stoff is proud to be one of the awardees of the German Video Game Awards 2012: Their game „The Great Jitters: Pudding Panic“ won in the category „Best Childrens Game”. The winners were announced today in a festive award gala in Berlin, which was the highlight of the Quo Vadis - Deutsche Gamestage, the most important German conference for the game industry.The price is awarded by an expert jury of Germany’s most prestigious game award, consisting of delegates of the German Federal Parliament, representatives of media pedagogy, representatives of the commission for the Protection of Minors in the Media, members of the video game industry and the gamer community as well as of game journalists. It honours game productions from Germany that stand out due to their qualities in terms of art and culture, education, technology and innovation, and of course, fun and entertainment.„We are very proud to have won this award,“ said Patrick Rau, Managing and Creative Director of kunst-stoff, in his speech of thanks during the gala. „We put all our love and energy into the creation of this game and we are happy, that so many people had fun playing it“, Patrick Rau adds. About the game„The Great Jitters: Pudding Panic“ is a humorous, fast-paced action puzzle game for gamers of all ages (USK: 6). Hero of the game is the jelly-like pudding J. Jitters, who is trapped in a spooky haunted house. The player’s task is to puzzle his way through the maze of rails to find the exit, before the jelly loses his courage energy and faints from fear. To help the anxious dessert out of disaster, the gamer needs to swap out rails at junctions and protect the pudding from the terrors waiting on the tracks: Angry witches, clattering skeletons and fire-spitting dragons roll over the rails and need to be defeated with an arsenal of madcap weapons. Coins need to be collected for the re-charge of the weapons and valerian to strengthen the pudding’s nerves...In 48 elaborate levels, players train their reaction skills and logical thinking. A heart-warming design and many gameplay variations offer a cute, but challenging gaming experience.The game was released in summer 2011 for iPhone, iPad, iPod touch and for PC and Mac. A Linux version was released in spring 2012. A critically acclaimed game conceptFor its innovative gameplay and beautiful design, the game was awarded with the red dot design award 2011 and the German Developer Award 2011 as „Best Mobile Game“ (among other awards). The game received excellent reviews worldwide and was on position 5, “Best iPhone Games 2011” on metacritic.com.For 2012, kunst-stoff plans to expand J. Jitters’ universe in a crossmedia context. More games for different platforms, a TV series and exploitation on other media are planned.kunst-stoff is an award-winning independent game developer and producer with an international business approach. We develop and produce games for international markets and for target groups of all ages. kunst-stoff also produces interactive exhibits for clients in the industrial and cultural fields and is active in the development of new technology. The company has received the honor of German Developer Awards in the categories “Best Children’s Game 2010″ and “Best Mobile Game 2011”, the TOMMI Kindersoftwarepreis 2011 in the category “Best PC game” and the the „red dot design award 2011“. The company is also active in the development of crossmedia and transmedia projects.The company’s offices are located in the heart of Berlin, in the Josetti-Höfe in Berlin-Mitte. Company Website: http://www.kunst-stoff.dePRESS CONTACT Contact persons: Maike Coelle and Ann-Kristin Sterba kunst-stoff GmbH, Rungestr. 22-24, D-10179 Berlin, Germany Tel/Fax: +49 (0)30 - 2345 7178 maike.coelle@kunst-stoff.de ann-kristin.sterba@kunst-stoff.de www.kunst-stoff.deMEDIA / ONLINE Download links (“The Great Jitters: Pudding Panic”): iPhone: http://itunes.apple.com/app/pudding-panic/id438513073?mt=8 Mac: http://itunes.apple.com/de/app/the-great-jitters-pudding/id457890784?mt=12 PC: http://www.gamesload.de/the-great-jitters-pudding-panic/ Official Website: http://www.thegreatjitters.com/pudding_panic.html • Gameplay Trailer • Presskit (English & German)Facebook: http://www.facebook.com/PuddingPanic Twitter: Follow us on https://twitter.com/#!/PuddingPanic

You can edit or delete your press release „THE GREAT JITTERS: PUDDING PANIC“ is “Best Childrens Game” at the German Video Game Awards 2012 here

10-16-2012 | IT, New Media & Software
kunst-stoff GmbH
What is the relationship between human being, bee and a Berlin game developer? - …
Berlin, 12.10.2012. kunst-stoff’s “BeeWithMe” is not only a fast pace endless runner game, it also has a documentary background: The offspring of zero one film’s documentary “More than Honey” takes the player on a surprising journey through the microcosm of the bee and shows the importance of this industrial insect for our ecosystem. Berlin-based game developer kunst-stoff is proud to announce the release of their new game BeeWithMe, which will