May recruiting competition in the web game Tagoria! 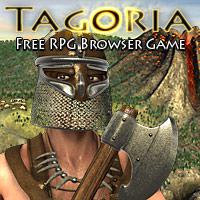 April showers bring forth May flowers ...Berlin based web game developer GameArt Studio greet the merry month of May with fresh ideas and great news for their Tagoria players:On the 1st of May begins a new competition where all players of the fantasy web game Tagoria can participate and win amazing prizes, including rare items and literally months of premium access.The recruiting competition will take place during the whole month of May. The three best recruiters in every language will be the winners.The goal of the competition is to recruit the most new players into the Tagorian worlds and adventures.The competition prizes and rules are available in the free forum: http://forum.tagoria.net. There you will also find useful hints from the Tagoria Support Team. If you are not already registered you should so immediately. The registration is not only free of charge but also very easy to do.The GameArt Studio Team wishes everyone the best of luck in this competition!GameArt Studio GmbH was founded in 2006 in Berlin and rapidly grew to become one of the most innovative developers and producers of so-called web games. Web games are computer games through which real players can play with and against each other over the internet. They can be played for free on any internet browser, with no software installation or downloads required. With their four games „Holy War“, „Tagoria“, „A.I. War“ und „Glory Wars“, GameArt Studio already entertain over 5 million players worldwide.GameArt Studio GmbH Bismarckstraße 107 10625 Berlin, Germany E-Mail: press_en@gameartstudio.de Internet: www.gameartstudio.de

You can edit or delete your press release May recruiting competition in the web game Tagoria! here