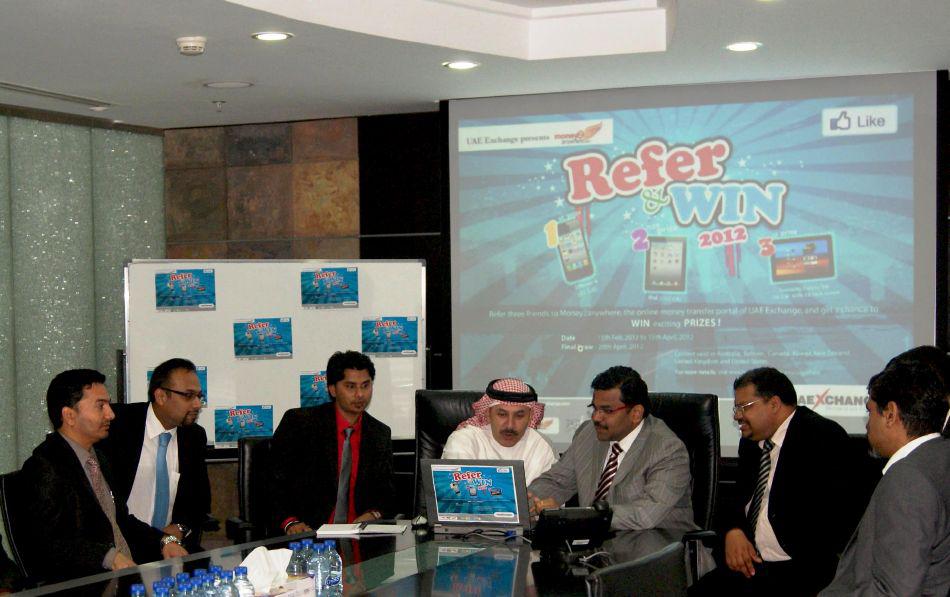 • Promotion was conducted across seven countries • Winners, from across countries, bagged iPhone4, iPad2 and Galaxy TabYes…one word of reference has brought in luck to Mr. P. E. Philip (Kuwait), Mr. Hardip Singh Sidhu (Canada) and Mr. Anish Joseph (Australia), as they have been selected as the first, second and third prize winners, respectively, in the recently ended Money2anywhere Refer and Win Contest 2012, by UAE Exchange, the leading global remittance and foreign exchange brand. The contest, which ran on the official Facebook fan page of Money2anywhere (facebook.com/money2anywhere) from 15th February to 15th April, 2012, gave away exciting prizes including iPhone4, iPad2 and Galaxy Tab to the winners. All fans, who referred three friends to the online money transfer portal, were eligible for the draw, which was held on 20th April, 2012 at the Global Head Quarters of UAE Exchange in Abu Dhabi. “Congratulations to all the winners”, exclaimed Mr. Promoth Manghat, VP – Global Operations, UAE Exchange. “At UAE Exchange, we were glad to see the overwhelming response, which we received during the promotion. This goes to show how much Money2anywhere is appreciated and trusted. The online portal witnessed over 70% growth in 2011 and this contest opened the gates for more people to get introduced. We are extremely thankful to all participants for being our brand ambassadors and strengthening our customer-base further through your referrals. It is your unstinting support that has made Money2anywhere a fast-growing online remittance portal.” added Mr. Manghat.The contest was conducted in seven countries, which include Australia, Bahrain, Canada, Kuwait, New Zealand, United Kingdom and United States of America, where the Money2anywhere service is available. Under the wings of UAE Exchange, this online portal enables its customers to send money to any corner of the world using credit / debit card or bank account, with an internet connection from anywhere. UAE Exchange has built the largest global network, among remittance brands, with over 570 direct offices in 30 countries. Its strong correspondent relationship with over 150 global banks further adds to its might. This online promotion was one among the many that the remittance major has conducted in its social media network, which too had received a similarly overwhelming response. More such promotions are being planned out to thank the strong online community that UAE Exchange has built in the social media space. The event was attended by senior officials of UAE Exchange.About UAE Exchange UAE Exchange is a leading global remittance and exchange house based in UAE with, with direct ‎operations spanning 29 countries across five continents with over 600 direct offices. With ‎correspondent banking relationship covering more than 150 global banks, and associations with ‎many leading brands globally to bring several value-added products to customers, UAE ‎Exchange, acclaimed the world over as the ‘World’s Trusted Money Transferrer provides ‎unmatched service in the industry to a wide customer base of around 3.5 million. In UAE, the ‎brand has a leading presence with a network of over 101 branches covering all the Emirates. In ‎October 2009, UAE Exchange commenced its 30th year of successful business operations. For ‎more information, logon to www.uaeexchange.com, www.money2anywhere.com and ‎www.smartpay.aeLahcen ATERTA Manager Media Relations UAE Exchange Centre LLC Al Saigh Building, Hamdan Street, PO BOX 170, Abu Dhabi, UAE Telephone: +971-2-4945480 aterta.lahcen@uaeexchange.com

01-23-2018 | Tourism, Cars, Traffic
Marketing Pro Junction
Celebrate Christmas and New Year with Cristal Hotel Abu Dhabi
The countdown to the festive season has begun. If you are planning to be in Abu Dhabi a stay at the Cristal Hotel Abu Dhabi will put you right in the heart of the capital surrounded by major tourist spots and festive activities. Enjoy the taste of traditional Christmas and New Year delights on offer at the hotel as you explore the city’s amazing attractions and events, including the newly
12-10-2011 | Tourism, Cars, Traffic
MPJ
Liwa Executive Suites Targets Event Visitors to Abu Dhabi
With the region’s highest occupancy growth rate during October, up 10.5 per cent to 76 per cent according to STR Global figures, hotels in Abu Dhabi are gearing up for a further boost in business during the winter months on the back of a strong events calendar. According to Amr Hamed, Hotel Manager of the Liwa Executive Suites managed by Coral Hotels & Resorts, the success of the Abu Dhabi Tourist
04-08-2011 | Energy & Environment
The Energy Exchange
Clarion Events opens office in Abu Dhabi
Clarion Events, and its subsidiaries The Energy Exchange and World Refining Association, have been granted a trade license to start operations in Abu Dhabi and have opened a new office to support its work in the upstream and downstream oil and gas sector in the Middle East. The new office in Abu Dhabi: * Reinforces our commitment to our clients and the region with a locally based team and infrastructure * Broadens our market
03-15-2011 | Business, Economy, Finances, B …
Samsonite
Samsonite opens new store at Dalma Mall in Abu Dhabi
Samsonite opens new store at Dalma Mall in Abu Dhabi 11th store in the UAE is part of company’s aggressive growth plans Reinforcing its aggressive growth plans across the Middle East, Samsonite Group – the worldwide leader in travel solutions – has announced the opening of its new store at Dalma Mall, a leading shopping destination in Abu Dhabi. The new store is Samsonite’s 2nd mono brand outlet in Abu
07-02-2010 | IT, New Media & Software
Saigun Technologies Pvt Ltd
SAIGUN TECHNOLOGIES APPOINTS EMPXTRACK DISTRIBUTOR IN ABU DHABI
July 1, 2010 (India) : Saigun Technologies appoints NBiz Infosol as an exclusive distributor of EmpXtrack in Abu Dhabi, UAE. EmpXtrack is a web based Human Resources & Talent Management HR software that automates all HR processes in any organization. Tushar Bhatia, President of Saigun Technologies said "We feel there are lots of opportunities in UAE and having a local distribuor in Abu Dhabi will further strengthen our sales there.
02-26-2009 | Logistics & Transport
World Food Programme & Maximus Air Cargo
FIRST GLOBAL CONFERENCE ACCLAIMED - Delegates praise inaugural Abu Dhabi event
Delegates to the first Global Aviation Safety Conference for Humanitarian Air Operations, held in Abu Dhabi at the end of last week, were unanimous in endorsing the event. The conference focused on aviation safety and the unique difficulties faced in transporting aid personnel and materials to sites that are often barely accessible. “This was an excellent forum to explore and share the problems and solutions inherent in airborne humanitarian operations,”
Comments about openPR
9 o'clock: discuss press release with client, 10 o'clock: submit release to openPR, within the briefest possible time release is published and displayed in a prominent place on openPR.de. I am thrilled!
Zehra Spindler, Calypso Now! - Communication Agency