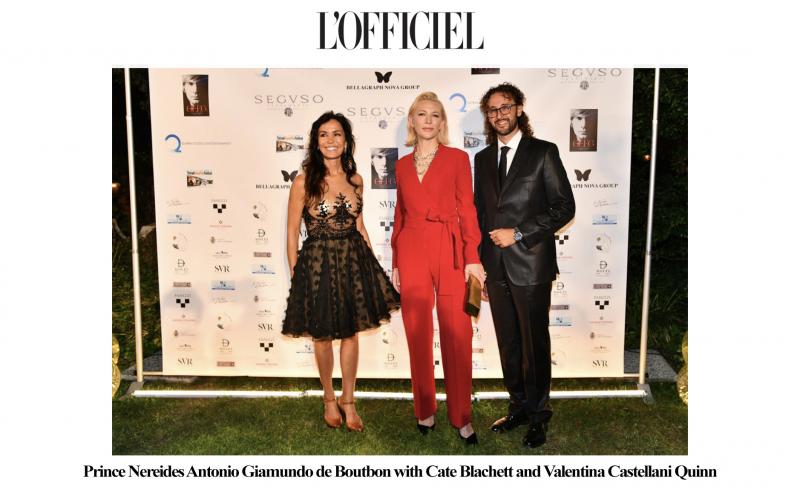 Founder of the Parisian Haute Couture House NEREIDES and a fine international financial strategist, Prince Nereides Antonio Giamundo de Bourbon puts his creativity at the service of fashion and finance. An unconventional personality, an artist, a businessman, a contemporary prince. The spirit of Nereides is inexorably linked to the history of the nobility and its two hometowns, Paris and Capri. Nereides' personal and professional journey is both atypical and complex.It is currently difficult to define an ordinary profile when it comes to a man who masters several apparently opposed fields, from finance to haute couture, passing through multiple professional experiences and unexpected and sometimes incomprehensible choices.Nereides lives and works between Paris and Capri, and he also lived in Florence for a few years. With a dual humanist and legal track record at the same time, and a confirmed experience in the haute couture, Nereides has always mixed science with philosophy, economics with art, law with fashion.Entrepreneur, couturier, philosopher, poet, economist, painter, journalist ... a thousand faces of a mysterious and impenetrable character, sober and not at all eccentric, who oscillates between two opposing worlds: the austerity of finance and international diplomacy, and the ephemeral beauty of art and haute couture.The common thread of his life is revealed to be his creativity, which he uses with versatility, whether it is a financial transaction or the design of a new haute couture collection for his own Parisian Maison.Since the youngest age, Nereides has worked on international projects, from the oil sector to real estate, from the art deal sector to financial trading, including various experiences in the marketing and trade sector in luxury houses, such as Chanel and Fendi for example, or others from the LVMH group.However, his artistic creativity has been developed alongside his entrepreneurial experience and fashion has always been one of his privileged fields.In 2007, he founded the haute couture house NEREIDES in Place Vendôme, his personal address, where he organizes private shows and he returns each year to his native island, Capri, where he often exhibits his creations during the summer.The same year, he consolidated an artistic and professional partnership with the Italian photographer and artist Lello Ammirati who became the Artistic Director of his House as well as his alter ego.Over the past 13 years, many celebrities and personalities of the international jet set have been captivated by the charm of NEREIDES haute couture creations which are characterized by timeless elegance and sensuality.The particularity of NEREIDES creations lies in the craftsmanship, the preciousness of the materials and the uniqueness of each piece.Each year, Nereides creates a small number of creations for a limited audience and each creation requires long weeks of work. Some of the materials used include diamonds and gemstones for hand embroidery, fur and exotic leathers.There are some muses who inspire the artistic evolution of the creator. Among them, actresses such as Nicole Kidmann, Angelina Jolie, Cate Blanchett, passing by models: the Italian model and actress Lilly Mandel who has been nicknamed the "new Monica Bellucci", the Parisian Marine Barbier and the model Mame Anta Wada already muse of the famous singer Rihanna.NEREIDES is also known for the production of men's haute couture and for unique high jewelry creations. Today, it is more and more difficult to become a part of the small clientele of this niche House for which Nereides personally chooses its members.Along with the passion for sewing and art, Nereides continues to work successfully in the financial field and from 2020 he joins forces with new business partners becoming the new Global Chief Marketing and Investor Relations Officer of Bellagraph Nova Group.The meeting with the founders of the BN group, Evangeline Shen and Nelson Loh, consolidates a new professional adventure for Nereides who sees himself at the head of an international conglomerate of more than thirty companies ranging from the financial trading sector to asset management. , from the medical and hospital sector to cosmetics, from robotics to fine jewelry with a team of over 23,000 employees. In August 2020, Nereides leads negotiations for the acquisition of the British football team Newcastle which the Bellagraph Nova Group wishes to buy and he plans a five-year marketing strategy which sees the creation of a new film production house, Papillon Media Production. , and his official debut in the world of cinema starting at the Venice Film Festival in September 2020 and its participation in international festivals such as the Golden Globe Awards and the Cannes Film Festival. Nereides then signs a partnership between Bellagraph Nova Group and Valentina Castellani-Quinn, founder and president of Quinn Studios Entertainment in Los Angeles for the production of films in Hollywood as well as short films for the online shopping market. Papillon Media Production is the very first international media content creation platform for brands and influencers who wish to sell their products or third-party products online on Chinese platforms.Creativity never ceases to inspire Nereides who is always open to new adventures and who touches with its daring and modernity.NEREIDES website: www.nereideshautecouture.comBellagraph Nova Group 10, Place Vendôme 75001 Paris FRANCE bnmedia@bellagraphnovagroup.comBellagraph Nova Group is an international financial Group founded on 2020 in Paris

11-13-2017 | Industry, Real Estate & Constr …
business news
Global LF Refined Steel market 2017 - HBIS Group, NSSMC Group, POSCO, Shagang Gr …
Apex Market Reports, recently published a detailed market research study focused on the "LF Refined Steel Market" across the global, regional and country level. The report provides 360° analysis of "LF Refined Steel Market" from view of manufacturers, regions, product types and end industries. The research report analyses and provides the historical data along with current performance of the global LF Refined Steel industry, and estimates the future trend of
08-28-2017 | Politics, Law & Society
Crowson Law Group
Crowson Law Group
It is commonly said that there is no such thing as minor surgery. Whether it’s getting an appendix removed or having a hip replacement, all surgical procedures are serious; more so if an error occurs during such a surgery. However, is any surgical error considered to be medical malpractice? This article will determine when a surgical error can be said to have reached the level of medical malpractice. It must
06-26-2017 | Health & Medicine
Skye Dental Group
Skye Dental Group
The Skye Dental Group has some of Glasgow’s most established, hygienic and professional practices under its umbrella. This includes The Glasgow Dentist, based in the Rutherglen area of Glasgow. The practice offers a range of private dental treatments such as teeth straightening systems, Damon Braces, Invisalign and Six Month Smiles, as well as dental implants for missing teeth and general dentistry and hygienist services. Damon Braces Damon Braces are a fixed brace teeth
12-08-2016 | Business, Economy, Finances, B …
Sharp World Group
Sharp World Group
Pour développer la fabrication il faut perfectionner son fonctionnement et intégrer de nouvelles méthodes modernes. A mesure que de nouvelles technologies apparaissent les entreprises сherchent à modifier l’équipement pour améliorer la qualité du produit. De tels changements influencent la fidélisation des clients ce qui assure les bénéfices et le profit de l’entreprise. Sharp World Group est une des sociétés leaders de production des systèmes de refroidissement et de congélation. Avec son
08-19-2011 | Health & Medicine
Dr. Batra's Care
Dr. Batra's Group Profile
Dr. Batra's – the name that represents excellence and commitment to the health services sector – the pioneering force that aims at building values for patients, employees, partners and for the society, at large. The fundamental business strategy of Dr. Batra’s is to innovate, to excel at whatever is created and to build a brand that constantly strives for something still better! Transparency in business and abiding by their fundamental principles
04-04-2011 | Business, Economy, Finances, B …
DeltaQuest Group
DeltaQuest Group Launches MySecondPassport.com
My Second Passport.com predominantly aims to assist and support individuals and their families with attaining citizenship abroad and obtaining work visas where required. The site extends to provide individuals with country specific citizenship laws and immigration options including economic citizenship programs. The main services offered by DeltaQuest Group via http://www.mysecondpassport.com website portal include; country specific citizenship laws, permanent and temporary residency and work visas, information on required documentation
Comments about openPR
OpenPR ist the nicest and most clearly laid out PR platform I have seen to this day. The press releases are displayed very nicely and clearly and without any unnecessary frills. The updates are fast and the finished release looks appealing and is clearly legible. Even with 16 years of experience one discovers new things from time to time. Congratulations!
Gabriele Ketterl, Director Marketing & PR, Menads