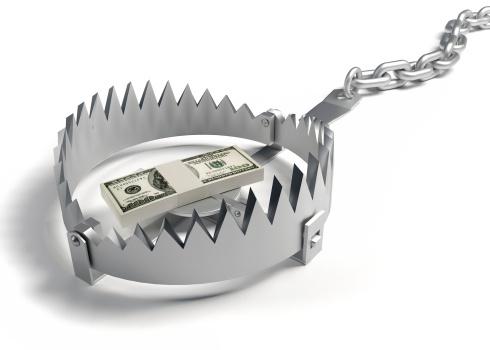 For the first quarter of 2012, the S&P 500 rose 12%, but Michael Lombardi, lead contributor to popular financial e-newsletter and web site Profit Confidential, believes this is a bear market trap. Lombardi points out that retail investor was severely burned in 2008, which is why he/she is hesitant to jump back into this stock market rally and the S&P 500. Lombardi then suggests that, when the retail investor believes he/she is missing out on a great opportunity and so finally capitulates and buys, it will be at the worst possible time. In the Profit Confidential article, The Makings of a Classic Bear Market Trap, Lombardi highlights the fact that this rise in the market has come without the participation of the retail investor. Lombardi also notes that the economic reports released recently are not as rosy as the headlines would suggest. “The housing recovery has still not materialized,” suggest Lombardi. “The average American’s real disposable income has not appreciated and is actually falling, which means that the consumer is not able to spend.” Lombardi is worried that most of the jobs created recently are low-paying, while the labor participation rate—reflecting those aged 16-64 that are actively engaged in the U.S. labor market—remains at 30-year lows. “People have given up looking for work,” suggest Lombardi. Lombardi believes this is a classic bear trap, where the stock market and the S&P 500 appreciate, while the economic fundamentals continue to deteriorate. “As history has shown, eventually, the S&P 500 and the stock market always reflect the economic fundamentals,” suggest Lombardi. Profit Confidential, which has been published for over a decade now, has been widely recognized as predicting five major economic events over the past 10 years. In 2002, Profit Confidential started advising its readers to buy gold-related investments when gold traded under $300 an ounce. In 2006, it “begged” its readers to get out of the housing market...before it plunged. Profit Confidential was among the first (back in late 2006) to predict that the U.S. economy would be in a recession by late 2007. The daily e-letter correctly predicted the crash in the stock market of 2008 and early 2009. And Profit Confidential turned bullish on stocks in March of 2009 and rode the bear market rally from a Dow Jones Industrial Average of 6,440 on March 9, 2009, to 12,876 on May 2, 2011, a gain of 99%.To see the full article and to learn more about Profit Confidential, visit www.profitconfidential.com.Profit Confidential is Lombardi Publishing Corporation’s free daily investment e-letter. Written by financial gurus with over 100 years of combined investing experience, Profit Confidential analyzes and comments on the actions of the stock market, precious metals, interest rates, real estate, and the economy. Lombardi Publishing Corporation, founded in 1986, now with over one million customers in 141 countries, is one of the largest consumer information publishers in the world. For more on Lombardi, and to get the popular Profit Confidential e-letter sent to you daily, visit www.profitconfidential.com.Michael Lombardi, MBA, the lead Profit Confidential editorial contributor, has just released his most recent update of Critical Warning Number Six, a breakthrough video with Lombardi’s current predictions for the U.S. economy, stock market, U.S. dollar, euro, interest rates and inflation. To see the video, visit http://www.profitconfidential.com/critical-warning-number-six.Profit Confidential is Lombardi Publishing Corporation’s free daily investment e-letter.Profit Confidential 350 5th Avenue, 59th Floor New York, NY 10118

You can edit or delete your press release S&P 500 in Bear Market Trap, According to Leading Financial Newsletter Profit Confidential here