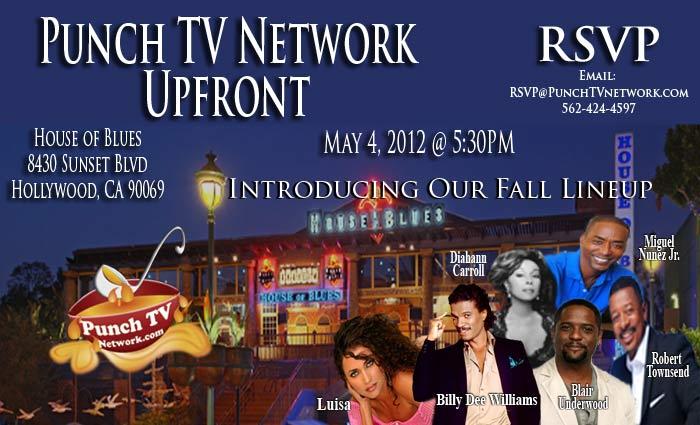 Los Angeles, Calif. – Life was never easy in the busy and violent streets of South Central L.A. for Joseph E. Collins II, the Founder, President and Chief Executive Officer of Punch TV Network. Yet, rather than joining gangs and pursuing the entrepreneurial activities of the alternative economy, hardship honed Joseph’s independent spirit and sharpened the genius that was embedded in every single strand of his DNA.And now, that will, that determinism, and an uncanny ability to see things as they can be has manifested itself in Punch TV Network. Punch TV is an urban programming experience that brings together a unique type of programming that reflects the tastes, preferences, hues, and nationalities of the new urban American – a population that includes Caucasians, African Americans, Latinos, Asians, Native Americans and citizenry of mixed ethnicity's.But, Punch TV’s “differentness” transcends the fact that it targets an urban population that is psycho-graphically rather than demographically defined. Punch TV Network, like Joseph E. Collins II, its founder, embodies the spirit and soul of independent entertainment.• Launched on Wednesday, October 19, 2011, shortly after Columbus Day, Punch TV is, in many ways, also an explorer. Instead of spending the normal costs of $100 million to launch, Punch TV spent $10 million. Rather than launching by airing re-runs of popular and loved shows, Punch TV has 70% original programming. And now, Punch TV extends its originality even further as it introduces its Fall lineup of shows to prospective advertisers and/or their representatives. Punch TV will be introducing a mere 17 of its roster of 36 new dramas, comedies, variety shows, talk shows, childrens shows, and inspirational entertainment on Friday, May 4, 2012 from 6:30 – 10:00 pm with a gala afterward. The event will be well attended by a number of celebrities including Blair Underwood, Robert Townsend, Vivica Fox, Obba Babatundé and many others. Punch TV Network is proud to be sponsored by Pit Bull energy drink. Pit Bull, another trailblazer in its own right, is headquartered in the San Fernando Valley area of California, and is the only independent energy drink manufacturer/distributor in the nation as well as the only minority owned Beverage Company in the nation. Punch TV Network, with a presence this Fall in more than 100 cities, does, indeed, personify the spirit of independent television. Punch TV! “Are you thirsty yet?” For further information, about this event, contact Rachel Ramos at (562) 424-4597.Punch TV Network is a new national television network currently being broadcast in 15 million households.Punch TV Network P.O. Box 92754 Long Beach, CA 90809

01-25-2021 | Health & Medicine
Persistence Market Research
The Medical Gas Analyzers market to record growth upfront in the next decade
Medical gas analyzers are instruments used for determining and measuring qualitative and quantitative composition of pure medical gases, or mixtures of medical gases. Medical gases used in hospitals and other healthcare settings mainly comprise of medical air, oxygen, carbon di-oxide, nitrogen and nitrous oxide. Medical gas analyzers include equipment and instruments such as vacuum systems, regulators, flow meters, monitoring systems (such as alarms and monitors), fluidics (valves, pumps, tubing), sealing
12-24-2020 | Health & Medicine
Persistence Market Research
The Animal Pathogen Identification Testing Market to record growth upfront in th …
Animal are categories in companion animal and livestock animal which have their own identity and applications. The prevention and treatment of animal from various diseases is required for their healthy and better lifestyle. The animal pathogen identification testing is one of the unique method for testing animal disease stage and the various, bacteria and other source of infection, show that veterinary professional can provide best treatment for complete recovery. The
12-24-2020 | Health & Medicine
Persistence Market Research
The Nephelometric Immunoassay Analyzers Market to record growth upfront in the n …
Nephelometric immunoassay analyzers are used for the quantification of drug levels in blood, which is based upon inhibition of immune-precipitation by a hapten (drug). Upon addition of assay test regents, both antibodies and antigen cluster to form an immune complex, which precipitates to form a turbidity solution. When light is passed through the reaction solution, nephelometric immunoassay analyzers measures the light scattered by the analyte at a fixed angle with
08-16-2017 | Business, Economy, Finances, B …
TMR
Moderate Upfront Capital Requirement for Restructuring Bodes Well for Global In- …
In-pipe hydro systems implies the use of micro turbines that can be embedded inside an existing network of pipelines, or onto them, and make use of the natural gravitational water flow within the pipes towards the high pressure heads. The micro turbines are able to convert the kinetic energy of flowing water into electricity that can be fed to a local power grid, or sent back to the main grid.
01-14-2011 | Politics, Law & Society
Global EDD Group
Bringing E-Discovery Back In-House, Without Upfront Investment: NaTIFF™ E-Disc …
The NaTIFF™ E-Discovery Server is an in-house solution that provides a high level of data control to law firms, corporations and service providers without a high cost of implementation. All data is stored on servers provided by Global EDD Group and administered via secure point-to-point VPN connection with dedicated 24x7 support. Simply attach a data drive to the NaTIFF server and the Global EDD Group team will manage the e-discovery
12-09-2010 | Health & Medicine
Muscle Maker Now
Muscle Maker Now Webpage Decides to Be Upfront About Fitness Scam?
Muscle Maker Now is striving hard to build the physiques of people around the world. The website, www.musclemakernow.com, shows information and guides concerning how to gain muscle mass in as little time as possible. "Our goal with this website is to allow for those who visit to gain true incite into what they are doing wrong, and how to correct it to see results instantly," said the
Comments about openPR
OpenPR is clearly structured and remains true to its principle of confining itself to the essential parts. OpenPR has proven to be a very good and reliable partner to our media agency: Within the shortest time the releases are online and go down well with the media representatives. The success of OpenPR is reflected in the steadily increasing number of press releases. It is good that OpenPR exists!
Ursula Koslik, Director Marketing & PR, F+W Hamburg