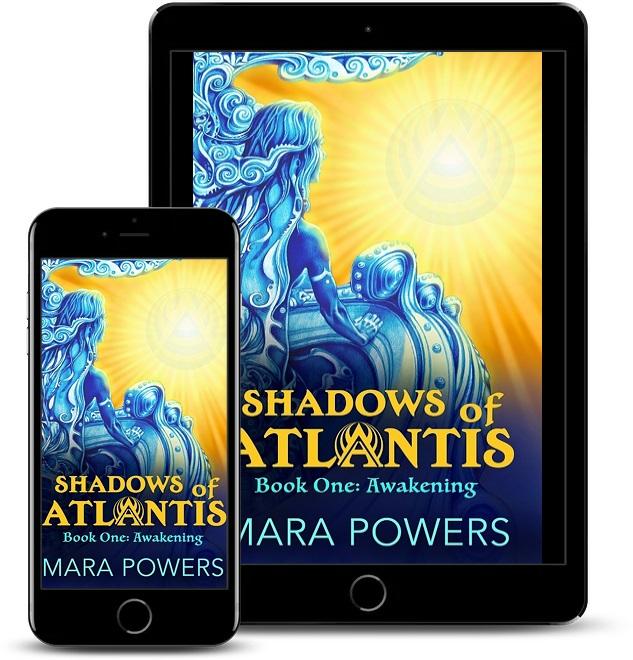 Author Mara Powers Promotes Her Mysterious Fantasy Novel - Shadows of Atlantis: AwakeningAuthor Mara Powers is pleased to announce the promotion of her mysterious fantasy novel, Shadows of Atlantis: Awakening. Rampant political intrigue, backstabbing jealousy, and deceit all drive the undertone of this magical, romantic world run by priests, royalty and otherworldly beings.The legacy of the legend. Atlantis as you've never seen it before.Brigitte is an emissary of nature chosen to renew the treaty between Atlantis and the ancient bloodline of Lemuria. Her sacred betrothal would renew the function of the Crystal Grid that powers the ten kingdoms of Atlantis. But her people are attacked by a storm of shadows, and now she is running for her life.Upon her arrival in the ruling city, she meets D’Vinid, a dejected musician who lives the quintessential Atlantean lifestyle of revelry, escapism and apathy. Under the eclipse of a holy festival marking the union of Atlantis’s mystical technology with nature, they are swept into an attraction they cannot resist. They become the embodiment of two gods whose union is meant to protect humanity from a deadly enemy - the Shadows of Atlantis. But this man is not her betrothed.Brigitte discovers the Grid is corrupted by psychic parasites that feed off human suffering, a sweeping epidemic called “The Madness.” The rituals required to charge the Grid with psychic emanations have been poorly attended, and this has caused the Grid to malfunction. But as nature always strives toward balance, the crystals have activated a genetic upgrade, and the youth have begun to express supernatural powers. Could it be that Brigitte and D’Vinid are meant to be leaders among the awakened? And if so, why does it seem impossible for them to be together?A mysterious tale of romance, seduction and betrayal that reaches just enough into the modern mind to ask - will we learn the lessons of Atlantis?Shadows of Atlantis: Awakening is available for purchase in print and ebook formats. Book Details: Shadows of Atlantis: Awakening By Mara Powers Publisher: SOA, LLC ISBN: 978-0996765206 ASIN: B017AC8K48 Pages: 324 Genre: FantasyAbout the Author: Mara Powers is a modern Renaissance woman, scholar, traveler, musician, producer and philosopher, all of which feed her writing. She has been researching the mysteries of lost civilizations since she was a teenager, a quest that has become a personal hero’s journey. She hails from the mountains of Colorado and the west side of Los Angeles where she spends her days wandering the shores of the ocean, dreaming up Atlantis. Contact: Website: https://www.shadowsofatlantis.com/ Twitter: https://twitter.com/ShadowsAtlantis Facebook: https://www.facebook.com/ShadowsOfAtlantis YouTube: https://youtu.be/mznSfnZiJng Instagram: https://instagram.com/shadowsofatlantis/ Promo Link: http://bookbuzz.net/blog/fantasy-shadows-of-atlantis-awakening-by-mara-powers/Purchase Links: https://www.amazon.com/gp/product/B017AC8K48 https://www.barnesandnoble.com/w/shadows-of-atlantis-mara-powers/1122014773?ean=9780996765206#shadowsofatlantis, #queenofatlantis, #atlantis, #fallofatlantisBookBuzz.net 59 Heritage Way Drive Rome, GA 30165Website: http://bookbuzz.net/blog/fantasy-shadows-of-atlantis-awakening-by-mara-powers/BookBuzz.net helps indie authors, hybrid authors, and small publishers promote and market their books. We also help with book reviews, publicity, and more. Let's Create Some Buzz For Your Book!!!

02-10-2019 | Business, Economy, Finances, B …
RESEARCH SOLUTION INSIGHTS
Shrink Bags Market to 2025 : BUERGOFOL GmbH.,Spektar d.o.o., Kuplast, Inauen Gro …
Shrink bags present high durability also extend the shelf life of any product carried. With the shelf life extended as a result of toughness and additional strength. This has increased the implementation of global shrink bags market. The worldwide market for shrink bags is considered to account for a market valuation in excess of US$ 4500 Million through the end of the calculated period of 2025, up from a market valuation
09-02-2016 | Leisure, Entertainment, Miscel …
Industry QI
Global MotorBoat Market 2016 : Kawasaki, Bombardier, Atlantis, Sunseeker, Heysea
A market study based on the "MotorBoat Market" across the globe, recently added to the repository of QY Insights, is titled ‘Global MotorBoat Market 2016’. The research report analyzes the historical as well as present performance of the global MotorBoat market, and makes predictions on the future status of MotorBoat market on the basis of this analysis. Major Manufacturers Analysis of MotorBoat are Kawasaki Bombardier Atlantis Sunseeker Heysea Bayliner Yamaha Get Free Sample Copy of Report Here :
05-30-2011 | Energy & Environment
Atlantis Energy Systems, Inc.
Atlantis Energy Systems, Inc. proves again, “Photovoltaics are an architectura …
Designed by Saavedra Gehlhausen Architects and Demonica Kemper Architects with A Design Consulting and Rock Valley Glass Company the college is redefining its future both academically and through example showcasing a 1.2KW PV Integrated Curtain Wall at the centers second floor Greenhouse. Rockford, IL, May 26, 2011: Rock Valley College nearing completion in August 2011 has finished installation of a 1.2kW Photovoltaic (PV) Integrated Curtain Wall located at the
09-19-2009 | Media & Telecommunications
Evologics GmbH
EvoLogics sold underwater modems for the Atlantis ABS project
EvoLogics GmbH has supplied underwater equipment and technical support to Offshore Manpower SA (OMSA) for the positioning, remote acoustic control and landing in the Atlantis Artificial Buoyant Seabed (ABS) unit trials. The ABS unit was submerged, tied back to wellhead and BOP landed successfully Apr 09, as part of the offshore phase trials on-board the vessel Nan Hai 5 in China. EvoLogics has provided the acoustic positioning and communication equipment and offshore
09-19-2008 | Leisure, Entertainment, Miscel …
Premier Booking & Management Co.
Patriot Entertainment At Atlantis Music Conference
Atlanta, September 18th, 2008. Premier Booking & Management Co. (PBM) announces that the Washington D.C. based hip-hop entertainment property, Patriot Entertainment, will take part in the 10th annual Atlantis Music Conference & Festival for 2008. This years 4-day event will be held Sept. 17th - 20th. The majority of the event will take place in midtown Atlanta, GA. Head of Patriot Entertainment, Tyrone Montague, aka Bobby Drake and other Patriot artists
09-15-2008 | Fashion, Lifestyle, Trends
World Fashion House, Inc.
Atlantis to Host Krishnar Lewis is Live Recording
High-end fashion model, actor, and Soul singer Krishnar will record live during the SESAC music presentation at the 11th Annual Atlantis Music Conference held at the CW Music Complex located at 1374 West Peachtree Street, Atlanta, GA 30309. The triple threat entertainer will be the lead artist among others to be filmed for the 2009 Rock Your Fashion campaign. The unplugged-styled recordings will be used in a hosts
Comments about openPR
We publish our press releases on openPR.de because we like people who are "open" - just like us.
Frank Obels, CEO, INCONET - Informationssysteme, Communication und Netzwerkberatung GmbH