Kögel is the job motor of the region 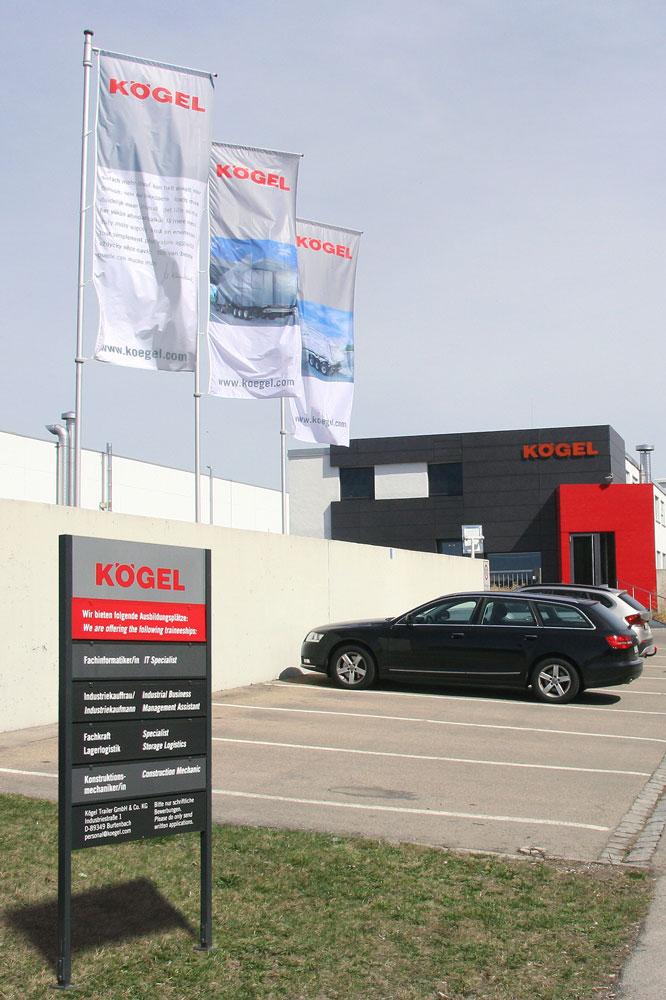 Burtenbach, 4th April 2012 Ulrich Humbaur is fulfilling his social responsibility to the regionSince 2009, more than 100 new jobs have been created in BurtenbachTrailer manufacturer Kögel is now in the limelight again with new energy and unique experience and competence. Since taking on Kögel in 2009, Ulrich Humbaur has assumed an active entrepreneurial role which gives the brand the stability and continuity it deserves. Since joining Kögel, his actions in Burtenbach have led to the creation of more than 100 jobs. In addition, Kögel has switched more than 30 leased employees to permanent positions and has rehired around 25 former employees. Now, there are around 600 employees at the Burtenbach location alone. Kögel believes in training Kögel is aware of its social responsibility and places a special importance on training, too. As a result, in addition to a significant increase in trainee positions since 2009, the company has also taken on all of its trainees in permanent positions in accordance with pay scale regulations following the completion of their training. At present, a further 16 trainees can anticipate a permanent position as an industrial clerk, expert in warehouse logistics, mechatronics engineer, or IT specialist, with four people participating in a dual study course in business administration, industry, and machine construction.“This year, too, Kögel is on course for growth thanks to Mr. Humbaur. For us, creating new jobs means investing in the future” says Anna Hugel, authorized signatory and Head of HR & IT at Kögel. “In addition to jobs for experienced workers and school-leavers, we offer places for trainees and people who want to participate in a dual study course.”Kögel, a brand steeped in more than 75 years of tradition, has earned itself a leading position throughout Europe and is now back in the limelight with renewed energy and an unmistakable blend of experience and expertise. When he took over Kögel in 2009, Ulrich Humbaur assumed an active entrepreneurial role which gave the brand the stability and continuity it deserves. This is further consolidated by the very sturdy equity ratio that Ulrich Humbaur has made available to his company. Kögel has reinvented itself – by returning to the strengths that originally made the company great: A passion for transport, quality characterised by engineering, innovation that earns its name because it brings benefits for customers, and the reliability of an owner-operated family company with long-term perspectives. In addition to products for the forwarding industry, there are now models for the construction industry, which is not entirely a new sphere of activity for Kögel. www.koegel.comKögel Trailer GmbH & Co. KG Industriestr. 1 89349 Burtenbach Germany Volker Seitz Head of communication Phone + 49 82 85 88 – 12 3 06 Fax + 49 82 85 88 – 12 4 24 volker.seitz@koegel.com www.koegel.com

09-11-2012 | Logistics & Transport
Kögel Trailer GmbH & Co. KG
The forwarding company MEINDL takes delivery of the seventeenth height-optimised …
Burtenbach, 9th. August 2012. • Kögel Mega P55: Maximum volume and compliance with the four metre regulation The Austrian MEINDL Transport Ges.m.b.H. extends its fleet with six new height-optimised Kögel Mega. In total, MEINDL now has 17 Kögel Mega P55 trailers in its fleet. The new volume miracle from the German trailer manufacturer is ideally suited to volume transport with its internal effective height of three metres at an overall height of just
09-11-2012 | Logistics & Transport
Kögel Trailer GmbH & Co. KG
Kögel's share of the market continues to grow in Germany
Burtenbach, 26th July 2012 • Kögel has sold more than 6,800 vehicles in the first 6 months of 2012 • Thomas Heckel: "In contrast to our competitors, we have once again been able to increase our share of the market in Germany considerably" • Exports accounted for 69 percent of sales The IAA commercial vehicle year of 2012 has so far been very good for Kögel: Europe's third largest trailer manufacturer has demonstrated an increase in
09-11-2012 | Logistics & Transport
Kögel Trailer GmbH & Co. KG
Kögel sandwich panel competence centre is now the Kögel PurFerro GmbH & Co. KG
Burtenbach, 19th July 2012 • Ralf Hirschfeld is the CEO of Kögel PurFerro GmbH & Co. KG. The sandwich panel competence centre in Duingen, Lower Saxony, has been a part of the Kögel group of companies since the end of 2011 and, from now on, will be called Kögel PurFerro GmbH & Co. KG. The renaming of the company is accompanied by the appointment of three managing directors to form the management
07-17-2012 | Logistics & Transport
Kögel Trailer GmbH & Co. KG
Kögel offers benefits for companies in the forwarding and construction sectors
Burtenbach, 11th July 2012 • Brand-new Kögel innovations help forwarding companies to save costs and to increase transport efficiency Innovations from the Swabian trailer manufacturer Kögel have characterised modern goods transport by road for decades. The fact that the ideas, concepts and innovations from Kögel turn up at other trailer manufacturers after many years confirms their leadership in innovation. In combination with our in-house know-how, we can meet the requirements of the

07-17-2012 | Logistics & Transport
Kögel Trailer GmbH & Co. KG
Kögel offers benefits for companies in the forwarding and construction sectors
Burtenbach, 11th July 2012 • Brand-new Kögel innovations help forwarding companies to save costs and to increase transport efficiency Innovations from the Swabian trailer manufacturer Kögel have characterised modern goods transport by road for decades. The fact that the ideas, concepts and innovations from Kögel turn up at other trailer manufacturers after many years confirms their leadership in innovation. In combination with our in-house know-how, we can meet the requirements of the
05-21-2012 | Logistics & Transport
Kögel Trailer GmbH & Co. KG
100 new Kögel Cargos for UAB Finėjas
Burtenbach, 21st. May 2012 Kögel gets a large order from Lithuania UAB Finėjas is getting 100 new trailers for its fleet The Lithuanian forwarding company Finėjas, one of the biggest in the Baltic area, is now placing its trust in Kögel quality. The forwarding company will receive the first of the 100 ordered Kögel Cargo platform trailers via the long-term Kögel general importer for Lithuania – UAB Transuorė. The Cargo has impressed the
03-11-2012 | Logistics & Transport
Kögel Trailer GmbH & Co. KG
Kögel introduces new integrated trailer roof tarpaulin
Burtenbach, 9th March 2012 No more obstructing straps on trailer roof Kögel improves the sliding roof and offers an increase ease of use. The new integrated trailer roof tarpaulin complies with DIN EN 12642 XL regulations. The therefore required roof straps are integrated in the roof tarpaulin. As such, obstructing straps in the trailer interior are a thing of the past. This improves the handling of the roof tarpaulin. No more hooking
02-01-2012 | Logistics & Transport
Kögel Trailer GmbH & Co. KG
Above-average growth for Kögel in 2011
Burtenbach, 31 January 2012 Last year Kögel sold 11,960 units and increased turnover by 130 per cent Exports accounted for 67 per cent of sales "Never before have we had so much innovative energy" – Thomas Heckel According to the VDA – the German Association of the Automotive Industry – Kögel achieved an above-average rate of growth in the 2011 financial year. Turnover at the renowned trailer specialist more than doubled in the
01-17-2012 | Logistics & Transport
Kögel Trailer GmbH & Co. KG
The forwarding company Mahlstedt chooses the height-optimised Kögel Mega
Burtenbach, 17th January 2012 Kögel Mega: Three metres loading height and just four metres total height The forwarding company Mahlstedt receives ten Mega trailers for its fleet The forwarding company Mahlstedt GmbH from Delmenhorst recently took delivery of ten new Kögel Mega trailers. The height-optimised trailers really made a hit on two fronts with Mahlstedt: They are not only optimum for carrying out of volume transport, but also comply with the permissible total
12-10-2011 | Logistics & Transport
Kögel Trailer GmbH & Co. KG
Kögel invests in the Burtenbach facility
Burtenbach, 9th. December 2011 Kögel works extends by an additional 6.5 hectares Jürgen Steinbacher: "We are expecting growth in production volume" The Burtenbach trailer manufacturer Kögel remains on course for success. The company is showing continuous growth, and this has, in recent times, had an impetus created by large scale European orders and orders associated with the field trails of the German Ministry of Transport. This works extension will ensure that Kögel
Comments about openPR
9 o'clock: discuss press release with client, 10 o'clock: submit release to openPR, within the briefest possible time release is published and displayed in a prominent place on openPR.de. I am thrilled!
Zehra Spindler, Calypso Now! - Communication Agency