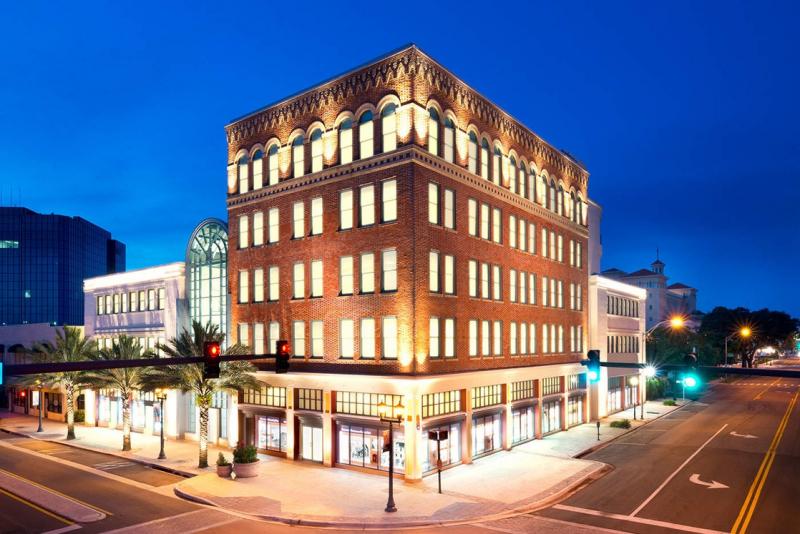 The Coachman Building in downtown Clearwater.

CLEARWATER,FL: The Church of Scientology Flag Service Organization invites the community to learn more about the history of Clearwater by visiting the outdoor display on Clearwater’s timeline at the Coachman Building. Located at 503 Cleveland Street, the Coachman Building was built in 1917. At the time, it was the tallest building in Pinellas County. S.S. Coachman, one of the founding fathers of Clearwater, ran his grocery from the first floor. The upper floors provided modern office space for some of Clearwater's first dentists, accountants and chiropractors. Now home to a seminary for Scientology staff members, the windows of the building are a display of Clearwater’s history, starting with the 1500’s and working through boomtime and depression to also highlight the musical heritage of Clearwater. Containing 74 photos and 12 artifacts from eras past, this exhibit shows Clearwater’s tremendous growth over the years. As some of the images dated from the 1880s, restoration work on the photos themselves was one of the first actions undertaken. "It took more than 100 hours of work to restore the photos. Scratches were removed, tears repaired and details returned to faded images," said Lisa Mansell, the Community Affairs Director for the Church of Scientology. Among the photos restored is an image of Clearwater’s early volunteer fire department. Research was also done to include appropriate artifacts to the displays. These include 1920's dinnerware from the Fort Harrison, 1920's golf clubs made by MacGregor Yardsmore and a 1924 Gamewell Fire Alarm Call Box. “The Fort Harrison silver tea pot and coffee pot were found several years ago by a couple in Jupiter, who then shipped them to us here,” continued Mansell. “The International Silver Company – who made these pieces in the 1920’s produced silverware for many major hotels. Their designs have also been collected by museums throughout the United States, including the Metropolitan Museum of Art in New York and the Art Institute of Chicago.” Internationally, the Church has been active in historic restoration for three decades, locally including the restoration of the Coachman Building, the renovation of the Clearwater Building and the full restoration of the Fort Harrison. “We wanted to celebrate Clearwater,” said Ms. Mansell. “There is a lot of history here, which is generally not known. The window displays are a popular stop for people coming to downtown and are available for all to view.” The Clearwater Building is now the Scientology Information Center and is open to guests daily from 10am to 7pm. For more information please call 727-467-6966.Lisa Mansell Public Affairs Office 503 Cleveland Street Clearwater, FL 33755ABOUT THE CHURCH OF SCIENTOLOGY FLAG SERVICE ORGANIZATIONFlag (the Church of Scientology Flag Service Organization) is a religious retreat located in Clearwater, Florida. It serves as the spiritual headquarters for Scientologists planetwide. Flag is the largest Church of Scientology in the world. Flag represents the hub of the greater Scientology worldwide community as a dynamic, multilingual organization. The title “Flag” follows from the fact that from the late 1960s through the mid-1970s, the highest ecclesiastical organizations were located at sea aboard a flotilla of ships. The 330-foot motor vessel Apollo served as L. Ron Hubbard’s home. Accordingly, it was then the most senior Scientology Church. It was known as the “Flagship” of the flotilla and called “Flag” for short. In 1975, the Flag Service Organization established itself in Clearwater, at the historic twelve-story city landmark Fort Harrison Hotel. Flag serves an international parishioner base of Scientologists from more than 70 countries. To learn more about Scientology, please go to www.scientology.org.

05-26-2020 | Associations & Organizations
Church of Scientology Flag Service Organization
Volunteer Ministers Center Re-Opens, Provides Practical Tools to Combat Stress
Clearwater, FL - The Scientology Volunteer Ministers of Florida have re-opened their downtown Clearwater center to groups of ten or less visitors. The Center is open seven days a week, 10am to 10pm Monday - Wednesday, Friday and Sunday; from 10am to 8pm Thursday and 1pm to 10pm on Saturdays. No appointment is necessary. Visitors are welcome to come by and avail themselves of complimentary copies of the popular 'Stay
09-13-2019 | Arts & Culture
Church of Scientology Flag Service Organization
Film Selections Announced for September 28th’s Second Annual Tampa Bay Humanit …
CLEARWATER, FL: The films for the 2nd Annual Tampa Bay Humanitarian Film Festival in Downtown Clearwater have been selected for this September 28th festival. The selected films include six films made in Florida as well as student film projects. A complete list of films can be found on the festival’s facebook site at https://www.facebook.com/TBHumanFF. The selected Florida Films are: • Trafficked in Paradise by Olivia Wilson • A Friend Called Spiderman by
07-12-2019 | Associations & Organizations
Church of Scientology Flag Service Organization
School Supply Donations are Our Cup of Tea at Clearwater Community Volunteers Ce …
CLEARWATER, FL, US, To provide needed school supplies for Pinellas County foster children, the Clearwater Community Volunteers (CCV) will host a tea party on July 14th and collect school supplies for the July 27th “Back to School Bash Festival”. Tea party festivities will include tea along with a selection of finger sandwiches, pastries and freshly made crepes. There is no cost to attend, but each guest is asked to bring school
07-08-2019 | Associations & Organizations
Church of Scientology Flag Service Organization
Men and Women in Business Entrepreneurs Flaunt their Crowning Achievements at th …
CLEARWATER, FLORIDA, On Saturday, June 29th, The Herman and Mary Allen Foundation held their 3rd Annual Men and Women in Business Showcase in the Crystal Ballroom of the historic Fort Harrison Hotel with over 120 guests in attendance. The showcase helps small-business owners realize their potential through personal coaching and enhancing of their professional image. The Men and Women Showcase is a program of the Herman and Mary Allen Foundation to

01-31-2019 | Politics, Law & Society
Church of Scientology Flag Service Organization
Women’s Rights Forum Brings Issues into Focus in Clearwater
On Saturday February 9th, United for Human Rights (UHR) Florida Chapter will host a forum on Women’s rights at their center, located at 29 N. Fort Harrison Ave, in downtown Clearwater. The event begins at 2:00 and there is no cost to attend. Refreshments will be served. “The purpose of these forums is to talk about those issues we don't normally talk about elsewhere, to get the discussion going so we
08-06-2018 | Advertising, Media Consulting, …
HTF Market Intelligence Consulting Pvt. Ltd.
Frozen Fish Market Is Booming Worldwide | AquaChile, Clearwater Seafood
A new business intelligence report released by HTF MI with title “Global Frozen Fish Market Insights, Forecast to 2025” that targets and provides comprehensive market analysis with future prospects to 2023. The analysts of the study have garnered extensive research methodologies and data sources (i.e Secondary & Primary Sources) in order to generate collective and useful information that delivers latest market undercurrents and industry trends. Request Sample Report @: https://www.htfmarketreport.com/sample-report/1288389-global-frozen-fish-market-5 If
11-16-2016 | Business, Economy, Finances, B …
727accounting.com
Gain Utmost Advantages from Accounting and Bookkeeping Clearwater
The correct information is the most essential resource for all types and sizes of businesses and let the employees work in a right direction. This accurate information involves the financial reports of the business and the performance is concluded from it. This conclusion states if the business is gaining profit or moving in the direction of loss. This data needs to be in the easily understandable format as all the
01-27-2011 | Advertising, Media Consulting, …
Career based training with Clearwater and Miami Colleges
Career based training with Clearwater and Miami Colleges
It is recognized that Florida Career College's commitment to Education is its main objective. The main focus at Florida Career College is educating and preparing its students for the role that they're going to play in society. If it really is your perception that a school education education is not adequate to obtain a foothold in the present workplace, it follows that The College is thus the best
01-24-2011 | Advertising, Media Consulting, …
Get Quality Education with Miami and Clearwater College
Get Quality Education with Miami and Clearwater College
It's well known that Florida Career College's commitment to Education is its main objective. It is focussed on teaching scholars therefore preparing them to fill an fundamental and therefore significant spot within society. For those that don't believe in a highschool education being sufficient to ensure the right job, it will be clear that Florida Career College should be the undisputed choice to receive further post-secondary education and
12-15-2009 | Business, Economy, Finances, B …
Clearwater Regional Chamber of Commerce
Clearwater Regional Chamber of Commerce and the Clearwater Arts Foundation Form …
The Clearwater Regional Chamber of Commerce and the Clearwater Arts Foundation are developing a closer partnership, which they believe will enhance the community through the infusion of the arts and boardroom boundaries of the business community. Clearwater, FL, August 17, 2009 - Studies have shown that art has a significant economic impact on the economy. Knowing that cultural institutions are a key part of economic revitalization, the Clearwater
Comments about openPR
We publish our press releases on openPR.de because we like people who are "open" - just like us.
Frank Obels, CEO, INCONET - Informationssysteme, Communication und Netzwerkberatung GmbH