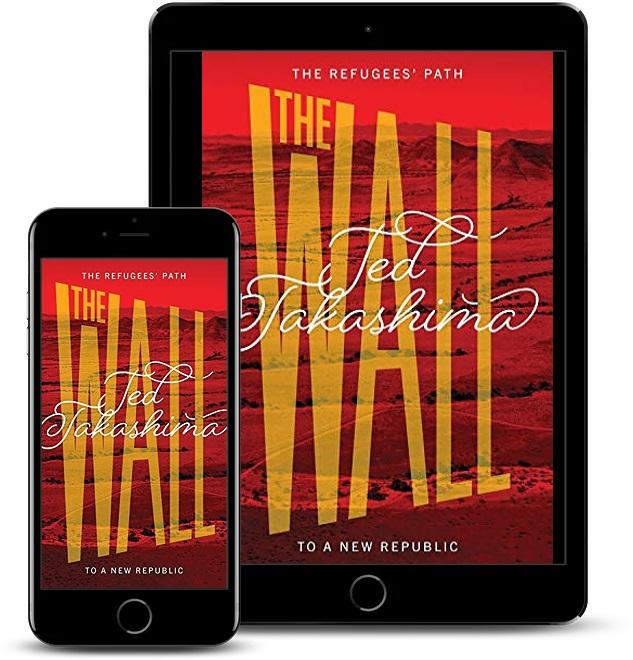 Museyon And Author Ted Takashima Release History Book - The WallAuthor Ted Takashima is pleased to announce the release of his new political action thriller, The Wall: The Refugees' Path to a New Republic. Released by Museyon in October 2020, the book is already receiving rave reviews from readers and reviewers. Captain Jadon Green has been labeled the Border Butcher after a terrible tragedy between the US military and illegal immigrants forcing their entrance into the United States of America at the Mexico border wall. Resigned to a life of misery and loneliness after losing not only his military career to a dishonorable discharge but also his family after his wife left him taking their daughter with her, Jadon is offered the chance to redeem himself in the eyes of the world and his family. His new mission is to lead a Revolutionary Army and found Nueva Cordova, a Central American country where no citizen will ever have to flee. Along with Professor Luis Escárcega—Cordova’s only hope for rebirth—and his daughter, Penelope, Jadon’s mission is on the brink of success when a bullet threatens to destroy it all. Will Nueva Cordova become a reality?Praise for The Wall: "We were impressed with The Wall . . . Using a fascinating and sophisticated blend of socioeconomic and humanitarian issues, author Tetsuo Ted Takashima gives readers much to think about within an otherwise entertaining action thriller." —Best Thrillers"The Wall is a powerful story of nation-building and changing hearts and minds. It will prove an attractively absorbing saga for any thriller reader who likes politics embedded in the actions and changing purposes of leaders and followers. The close inspection of the roots and minds of refugees creates an added dimension of understanding not present in most other genre reads." —D. Donovan, Midwest Book Review". . . earnest mash-up of politics and espionage set in the near future . . ." —Publishers WeeklyThe Wall: The Refugees' Path to a New Republic is available for purchase in print and ebook formats. Book Details: The Wall The Refugees' Path to a New Republic By Ted Takashima Publisher: Museyon Published: October 2020 ISBN: 978-1940842462 ASIN: B08GXYPQFS Pages: 320 Genre: Political Thriller, Action ThrillerAbout the Author: After working as a scientist for the Japan Atomic Energy Research Institute, Ted Takashima moved to California, where he studied at the University of California. He has published more than thirty novels in the action/thriller/suspense/mystery genres in Japan. His novels include the action thriller Intruder, which won the 1999 Suntory Mystery Award, and Pandemic (2010), which foretold the global spread of COVID-19 in 2020.Contact: Publisher's Website: http://www.museyon.com/the-wall/ Twitter: http://www.twitter.com/museyon Facebook: http://www.facebook.com/museyon YouTube: https://youtu.be/1FfsjZLspw8 Instagram: http://www.instagram.com/museyonbooks Promo Link: https://bookbuzz.net/blog/political-thriller-the-wall-by-ted-takashima/Purchase Links: https://www.amazon.com/Wall-Refugees-Path-New-Republic-ebook/dp/B08GXYPQFS/ https://www.barnesandnoble.com/w/the-wall-tetsuo-ted-takashima/1136739842?ean=9781940842462 https://www.kobo.com/us/en/ebook/the-wall-93 https://books.apple.com/us/book/the-wall/id1529681519 https://play.google.com/store/books/details/Tetsuo_Ted_Takashima_The_Wall?id=IfH5DwAAQBAJ https://www.indiebound.org/book/9781940842462#thewallrefugee, #thewalltakashima #thriller #bookbuzzBookBuzz.net 59 Heritage Way Drive Rome, GA 30165Website: http://bookbuzz.net/blog/political-thriller-the-wall-by-ted-takashima/BookBuzz.net helps indie authors, hybrid authors, and small publishers promote and market their books. We also help with book reviews, publicity, and more. Let's Create Some Buzz For Your Book!!!

11-23-2020 | Science & Education
Fiitjee Foundation for Education Research and Training
VELLORE'S FIRST WALL OF FAME
FIITJEE Global School, is unveiling Vellore’s first Wall of Fame at its Vellore School Campus on the 5th of December. The launch event would herald the beginning of a merit identification & rewards contest for all children of Vellore & adjoining areas in the age group 3 to 14 years. Children are invited online to participate in this fabulous contest and showcase their subject knowledge. Students can choose one favourite
11-27-2018 | Industry, Real Estate & Constr …
Market Research Hub
Building Curtain Wall
Looking at the current trends across the Building Curtain Wall market, a new study has been included to the wide database of Market Research Hub (MRH). The assessment is titled "Global Building Curtain Wall Market Insights, Forecast to 2025", which discourses the various market impacting factors like drivers, restraints and opportunities. Moreover, readers are informed about the competitive landscape which enlightens about the different players operating in the Building Curtain
11-28-2017 | Advertising, Media Consulting, …
Market Research Nest
Global Wall Decor Market (Wallpaper, Wall Mirrors, Wall Art & Others) 2017 to 20 …
MarketResearchNest.com adds “Global (North America, Europe And Asia-Pacific, South America, Middle East And Africa) Wall Decor Market 2017 Forecast To 2022” new reports to its research database. The report spread across 118 pages with tables and figures in it. Wall Décor in this report covers.... Scope of the Report: This report focuses on the Wall Decor in Global market, especially in North America, Europe and Asia-Pacific, South America, Middle East and Africa. This
03-21-2016 | Fashion, Lifestyle, Trends
9D Research Group
Global Wall Oven Market 2016, Wall Oven Market Growth, Wall Oven Market Size, Wa …
9D Research Group has recently announced the addition of new report "Wall Oven Market 2016 - Global Industry Size, Trends, Growth, Share, Opportunities and Forecast by 2020" to their offering. 2016 Global Wall Oven Industry Report is a professional and in-depth research report on the world's major regional market conditions of the Wall Oven industry, focusing on the main regions (North America, Europe and Asia) and the main countries (United States,
11-03-2010 | Arts & Culture
Moxxo Design
Old Mining on Your Wall
Saxon Mining Calendar Sheds New Light on the History of Miners and Smelters The “Original Saxon Mining Calendar” has been covering various topics from the history of the regional mining industry for 18 years. No other format has so far been continuously presenting ever newer aspects of Saxony’s most prominent cultural asset. The publishers Jens Kugler, René König and Dr. Rudolf Störr offer their latest edition under the headline “Traditionals of
07-16-2009 | Industry, Real Estate & Constr …
Hexis S.A.
Wall Graphics Vinyl from Hexis
Hexis, the manufacturer of self-adhesive vinyl with headquarters in France, announces the launch of a new printable cast vinyl film for wall graphics. The VCSR100WG1 is designed for direct application onto brick, concrete or plaster walls. The compound is made of a highly conformable 50µm vinyl and it carries a high tack adhesive to ensure perfect adhesion on such irregular surfaces. The VCSR100WG1 can be stuck directly on brick walls and will
Comments about openPR
I can't but agree to the positive statements about your portal: easy to use, clear layout, very good search function, and quick editing!
Jens O'Brien, Borgmeier Media Communication