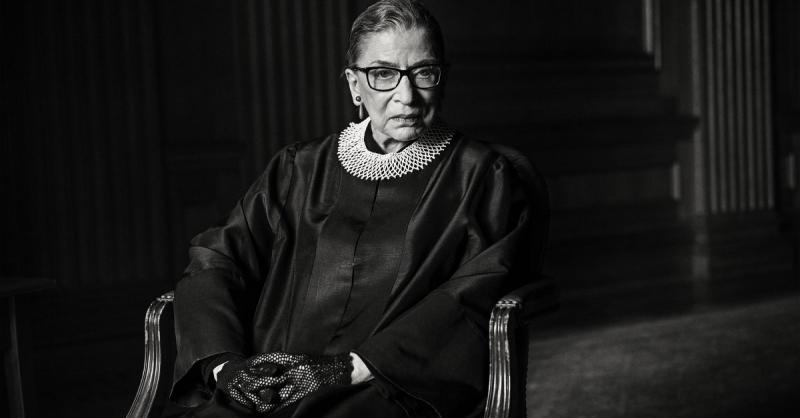 It is alarming to see how many Christians, including some Seventh-day Adventists, have been singing the praises to Ruth Bader Ginsburg, the most pro-abortion and pro-homosexual Supreme Court Justice ever to serve at our nation’s highest court. You would expect the world to celebrate baby-killing and same-sex marriage, but you don’t expect those who claim to be members of the commandment-keeping church of Jesus to do the same. This is one of the reasons why our churches are spiritually dead.

“She stood up for the downtrodden … She stood for the less fortunate, and for those who didn’t have a voice.” [1]

She defended those who had no voice? This statement is ridiculous and incredible. Notice how US Senator Doug Collins described Ruth Bader Ginsburg’s legacy:

"RIP to the more than 30 million innocent babies that have been murdered during the decades that Ruth Bader Ginsburg defended pro-abortion laws. With @realDonaldTrump nominating a replacement that values human life, generations of unborn children have a chance to live." [2]

Some may argue that we don’t necessarily have to agree with everything Ruth Bader Ginsburg stood for in order to celebrate her. Well, the same could be said for the Nazis under Hitler. Will they also celebrate the Nazis for the good points they had? Of course not because we should never celebrate what God calls evil.

“Ye have wearied the LORD with your words. Yet ye say, Wherein have we wearied him? When ye say, Every one that doeth evil is good in the sight of the LORD, and he delighteth in them.” Malachi 2:17.

Ruth Bader Ginsburg’s enduring legacy will include not only millions of dead babies, but also the destruction of the institution of marriage. She voted against biblical marriage in 2015. [3] She was the first Supreme Court Justice to perform a gay wedding in her chambers at the United States Supreme Court and she also officiated at other same-sex weddings. [4]

And today we have phony Christians trying to remember all of Ruth Bader Ginsburg’s good achievements while ignoring her repeated rulings on infanticide, partial-birth abortion and gay marriage. You can say, “Oh, don’t judge her.” We don’t have to, because God will:

“And I saw the dead, small and great, stand before God; and the books were opened: and another book was opened, which is the book of life: and the dead were judged out of those things which were written in the books, according to their works.” Revelation 20:12.

Ruth Bader Ginsburg will soon discover that God has a Court in heaven that is higher than the Supreme Court of the United States. She will sit in trial, not as a judge, but as a defendant. And God has a written record of every ounce of blood that was shed with her approval. Every cry of pain from the murdered babies will be reproduced and every act of abomination that she condoned will be replayed.

“For we must all appear before the judgment seat of Christ; that every one may receive the things done in his body, according to that he hath done, whether it be good or bad.” 2 Corinthians 5:10.

No one is getting away with anything in this life. No one will escape accountability before a holy, just and righteous God. Not Hitler, not Stalin, not Mao and not even Ruth.

“Woe unto them that call evil good, and good evil; that put darkness for light, and light for darkness; that put bitter for sweet, and sweet for bitter.” Isaiah 5:20.

“Which justify the wicked for reward, and take away the righteousness of the righteous from him!” Isaiah 5:23.

“Therefore as the fire devoureth the stubble, and the flame consumeth the chaff, so their root shall be as rottenness, and their blossom shall go up as dust: because they have cast away the law of the Lord of hosts, and despised the word of the Holy One of Israel.” Isaiah 5:24.

06-19-2020 | Sports
New York Sports Tours
Exclusive Babe Ruth Video Highlights New York Sports Tours’ Return With Virtua …
For two years, New York Sports Tours has brought New York sports history to life for guests through one-of-a-kind luxury sports tour experiences. And while fans can’t board the minibus and zip around the city in person, they can participate worldwide in the unique New York Sports Tours Virtual Tour Experience on Thursday, June 25, beginning at 6 p.m. ET. The special event will feature a celebration of the 100th anniversary
04-04-2017 | Associations & Organizations
St. Vincent and Sarah Fisher Center
St. Vincent and Sarah Fisher Center Names Ruth Nye-Hurst as Volunteer of the Yea …
St. Vincent and Sarah Fisher Center (SVSF) has named Ruth Nye-Hurst as its Volunteer of the Year for 2017. Ruth graduated with her Master of Education from Wayne State University and taught high school mathematics in the Detroit Public Schools system for more than 25 years before retiring. Discovering the volunteer opportunity with SVSF through an online search, she has been volunteering with the GED program since 2009. "As one of our resident
10-11-2016 | Arts & Culture
Ruth Finnegan
Renowned Scholar And Author Ruth Finnegan Announces New Release, 'Black Inked Pe …
Author Ruth Finnegan has announced the release of her latest epic romance novel, 'Black Inked Pearl'. 'Black Inked Pearl' tells the story of a naive Irish girl Kate and her mysterious lover, whom she rejects in panic and then spends her life seeking. After the opening rejection, Kate recalls her Irish upbringing, her convent education, and her coolly-controlled professional success, before her tsunami-like realisation beside an African river of the emotions
09-11-2012 | Leisure, Entertainment, Miscel …
Gallagher's Steak House
Babe Ruth Look-Alike Contest Set For Monday, September 24 To Celebrate Gallagher …
The year was 1927. The Babe hit 60, and Gallagher’s Steak House was born. In celebration of its 85th Birthday this year, Gallagher’s (228 West 52nd Street) will host a Babe Ruth Look-Alike Contest on Monday night, September 24, at 6:30 PM. A galaxy of to-be-announced prizes will be awarded to the winner, as selected by a blue ribbon panel. To enter, contact: johnnycigarpr@aol.com or call 914-260-7436, and
04-22-2011 | Science & Education
Adelphi University
Ruth C. Balkin ’73 to Receive Honorary Degree from Adelphi University
The Honorable Ruth C. Balkin ’73 will receive an honorary doctor of laws degree from Adelphi University at its 115th Commencement on Friday, May 20, 2011. The ceremony will begin at 10:00 a.m. in the Nassau Veterans Memorial Coliseum, 1255 Hempstead Turnpike, Uniondale, NY. Ruth C. Balkin is an Associate Justice on the Supreme Court of the State of New York, Appellate Division Second Judicial Department. Justice Balkin began her legal
04-22-2011 | Science & Education
Adelphi University
Adelphi University Honors Geoffrey Palmer ’61 with the Ruth Stratton Harley Di …
Geoffrey Palmer ’61 will receive the Ruth Stratton Harley Distinguished Alumni Achievement Award from Adelphi University at its 115th Commencement on Friday, May 20, 2011. The ceremony will begin at 10:00 a.m. in the Nassau Veterans Memorial Coliseum, 1255 Hempstead Turnpike, Uniondale, NY. Mr. Palmer, who currently serves as vice president for UBS Financial Services, works with private clients on financial planning and estate planning. He has been with the
Comments about openPR
OpenPR ist the nicest and most clearly laid out PR platform I have seen to this day. The press releases are displayed very nicely and clearly and without any unnecessary frills. The updates are fast and the finished release looks appealing and is clearly legible. Even with 16 years of experience one discovers new things from time to time. Congratulations!
Gabriele Ketterl, Director Marketing & PR, Menads