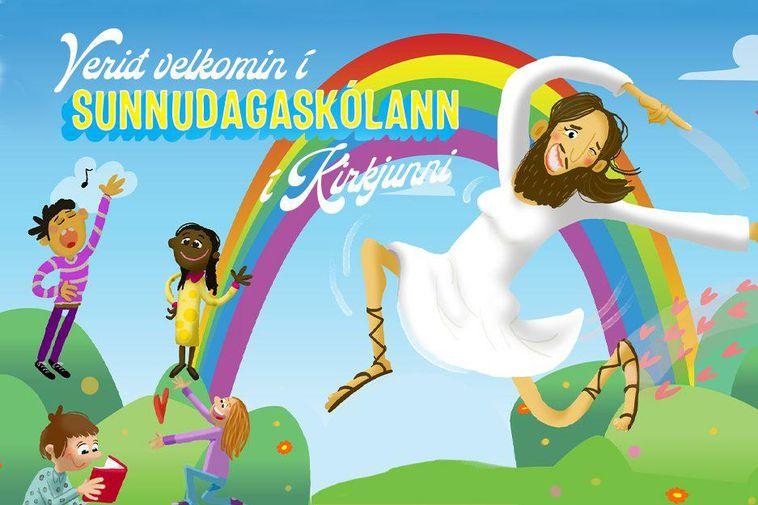 The text says: “Welcome to Sunday school at your church.”

This is a perfect illustration about everything that is wrong with the progressive, liberal, inclusive, modern church. Once you head down this path, you end up with an effeminate, transgender Jesus with woman’s breasts, lipstick and rosy red cheeks jumping through LBGT+ rainbows. The National Church of Iceland, also called the Evangelical Lutheran Church, is the state church of Iceland and professes the Lutheran faith. They paid $12,500 (EUR) for an advertising campaign to promote the big breasted transgender Jesus on the public busses in the capital city of Reykjavík.

Pétur Georg Markan, a representative of the National Church of Iceland, said that the church believes that this depiction of Jesus is “positive and natural” and is meant to “celebrate diversity.” Pétur defended the artwork by saying:

“Each person interprets something in this picture. Some people interpret it as a trans-Jesus, others as a woman. Some see Mary with a beard, and others see a genderqueer person. Views within the church are just as diverse as elsewhere.”

Transgender Jesus, genderqueer and Mary with a beard? They have depicted Christ with every aberrant sexual inclination a depraved person could possibly have. Welcome to the “affirming” and “inclusion” movement. This is what you will end up with. But what makes this matter even more abominable is that depraved people masquerading as “Christians” are now enlisting the God of heaven into their degeneracy.

This blasphemous public advertisement campaign was a shameful attempt by corrupt humans to impute the vile and fleshly ways of sinners onto a pure and holy God. It is because of these abhorrent acts that God will bring judgments on the earth:

“Thou thoughtest that I was altogether such an one as thyself: but I will reprove thee, and set them in order before thine eyes. Now consider this, ye that forget God, lest I tear you in pieces, and there be none to deliver. Whoso offereth praise glorifieth Me: and to him that ordereth his conversation aright will I shew the salvation of God” Psalm 50:21-23

The apostasy within Christianity today has no limit. The Evangelical Lutheran Church in Iceland and in other places have derided and ridiculed their Lord in the eyes of the world. Instead of misrepresenting the character of God with these shameful displays, we ought to be humbling ourselves before the holy God of the universe.

Remember, the men of Sodom also became confused and thought that the holy angels of God could be the objects of their sexually deprived minds when they sought to have intimate relationships with them (Genesis 19:4). The Bible says:

“The Lord rained upon Sodom and Gomorrah brimstone and fire from the Lord out of heaven; and He overthrew those cities, and all the plain, and all the inhabitants.” Genesis 19:24, 25.

It’s bad enough when Christians begin teaching that chromosomes, DNA and body parts don’t determine a persons’ gender. These progressive liberal “Christians” have been doing this for generations, but now they have become so bold as to smear God himself to suit their corrupt perceptions. Now many are attacking the holiness and purity of Christ by portraying Him as gay or transgender. The following words have truly come to pass:

“But, beloved, remember ye the words which were spoken before of the apostles of our Lord Jesus Christ; How that they told you there should be mockers in the last time, who should walk after their own ungodly lusts. These be they who separate themselves, sensual, having not the Spirit.” Jude 1:17-19.

09-11-2017 | Politics, Law & Society
Advent Messenger
Trump’s National Day of Prayer: Is God Listening?
President Donald Trump issued a proclamation this past Sunday to be the National Day of Prayer for Hurricane Harvey victims. He called upon all Americans and all houses of worship to unite in prayer to God for the nation and to assist those suffering from the consequences of the storm. Even though this is a welcome step in the right direction that we acknowledge God and the significance of prayer, it
09-13-2016 | Associations & Organizations
A Work of Hope
EVANGELIST PASTOR JOHN COLLINS WALKS FOR GOD BECAUSE "GOD MATTERS"
Wheatland, Wyoming: Evangelist Pastor John Collins, head pastor of Love That Cross Ministries, is recognized as one of the 15 most influential pastors living in the United States today by Inspirational Faith Magazine. His faith is unwavering and inspirational. His preaching is spiritual and moving. His style is vibrant and animated. He is a fresh and honest example for evangelism, revival, and renewal that is sweeping the
03-01-2013 | Arts & Culture
Jerry Pollock PhD
God And Science: Jerry Pollock PhD Explains Why Science Is, In Fact, The Search …
In Jerry Pollock’s view, God is the Master Scientist. However God operates on a different level of science because He has limitless powers that human scientists do not, indeed cannot understand. God is the unified theory of the universe that Einstein so desperately sought to find, even on his deathbed. “With God,” Pollock stated, “we are not just dealing with another human being. His powers and His intelligence are trillions of
01-24-2013 | Arts & Culture
Jerry Pollock PhD
God and Science: Author Jerry Pollock, PhD Proposes Science Does Not Does Exclud …
In a recent symposium in New York City, scientists who both believed and disbelieved in God discussed the problematic issue of science and religion. Opponents of a Supreme Being involved in creating our universe framed their arguments around their beliefs that centuries of scientifically proven biological experiments and theoretical physics and mathematics exclude God’s participation, while proponents took the opposite view where they felt that science cannot answer all the
11-03-2010 | Politics, Law & Society
German Center for Research and Innovation
The Widening Atlantic: Market Gap – War Gap – God Gap
NEW YORK (November 2, 2010) – The German Center for Research and Innovation (GCRI), in cooperation with the Heidelberg University Association, will host a transatlantic discussion on forces of internationalization, power shifts in an increasingly multi-polar world, and the structural differences of social policy between Germany and the United States. The event will take place on Monday, November 8, from 6:30-8:30 P.M., at the German House New York (871 United
09-03-2007 | Health & Medicine
Noble Foundation
Man is God but lacks self-realisation: 'You Are God' book by Shashi Verma
A recently released book by Shashi Verma, You Are God – The Bhagavad Gita as never before, provides the answer to man’s eternal quest, “Who am I?” and “Who is God?” It clearly says that man is himself God but does not have the self realization that he is God. The author explains that man can free himself from ageing and death and attain everlasting life in the same physical
Comments about openPR
We publish our press releases on openPR.de because we like people who are "open" - just like us.
Frank Obels, CEO, INCONET - Informationssysteme, Communication und Netzwerkberatung GmbH