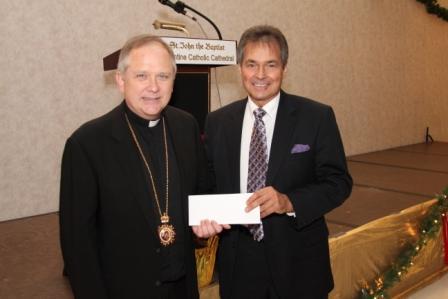 Beaver, PA - The 56th Annual Saint Nicholas Celebration to benefit Saints Cyril and Methodius Byzantine Catholic Seminary was held on Sunday, December 9, 2012 at Saint John Cathedral Center, 210 Greentree Road in Munhall, Pennsylvania. During the program, George Juba, GCU President and CEO, presented an educational grant of $100,000.00 to Archbishop William C. Skurla of the Archeparchy of Pittsburgh for the SS. Cyril & Methodius Byzantine Catholic Seminary.In honor of Saint Nicholas, the Patron Saint of the Byzantine Catholic Church, the Archeparchy of Pittsburgh and the Greek Catholic Union (GCU) hold this annual event to offset the costs of educating students entering or currently attending the seminary. Since the event’s inception in 1961, the GCU has donated more than $2.6 million. Event attendees were asked to bring a new, unwrapped toy suitable for a child up to age 12, to be donated to the Salvation Army’s ‘Treasures for Children’ program. As in previous years, the toys were donated in blessed memory of Archbishop Basil M. Schott. Since 2010, more than 800 families have benefitted from the toys collected at the Saint Nicholas event.“The Saint Nicholas Celebration is an awesome showcase of fraternalism and the sentiment of giving,” said Christie Petty, Fraternal Director of the GCU. “Our Byzantine Catholic parishioners are not only helping the seminary but also many children in need this season.”ABOUT THE BYZANTINE CATHOLIC ARCHEPARCHY - The Byzantine Metropolitan Church of Pittsburgh was established as the Exarchate of Pittsburgh in 1924. This Exarchate expanded to become the Eparchy of Pittsburgh and the Eparchy of Passaic in 1963. Full status as a Metropolitan Church was granted in 1969 with the designation of the Archeparchy of Pittsburgh, the Eparchy of Passaic, the Eparchy of Parma and, later, Holy Protection of Mary Eparchy of Phoenix. The Metropolitan Church is governed by the Council of Hierarchs comprised of the Metropolitan Archbishop and the bishops of each of the eparchies.ABOUT THE BYZANTINE CATHOLIC SEMINARY OF SS. CYRIL AND METHODIUS - The Byzantine Catholic Seminary of SS. Cyril and Methodius is a school of theology whose primary mission is to prepare candidates for priestly ministry to the Byzantine Catholic Churches of North America. The academic programs of the Seminary are open to qualified off-campus students whether lay or religious. Founded in 1950, the Byzantine Catholic Seminary is governed by a Board of Directors, appointed by and under the direction of the Metropolitan Archbishop of Pittsburgh.ABOUT THE GREEK CATHOLIC UNION - Founded in 1892, the GCU is a Fraternal Benefits Society originally based in the Byzantine Catholic Church which now welcomes persons of all Christian faiths. The GCU provides insurance and other financial products to more than 42,000 members nationally, 70% of which reside in Pennsylvania. The GCU promotes fraternalism for its members through benevolent and community service programs, as well social and athletic events.Greek Catholic Union (GCU) Christie Petty, Fraternal Director 5400 Tuscarawas Road Beaver, PA 15009 724.495.3400 ext. 3923 cpetty@gcuusa.com