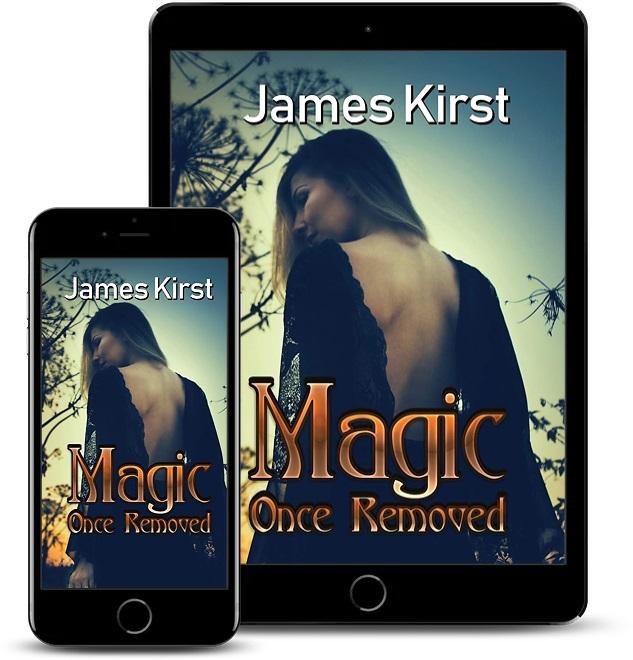 Author James Kirst Releases New Paranormal Suspense Novel - Magic Once RemovedAuthor James Kirst is pleased to announce the release of his paranormal suspense novel, Magic Once Removed. Uncover a mystery over three centuries in the making…Down on his luck former police detective turned private investigator Peter Cunningham thought the beautiful Abigail Mitchell was just another crazy client. Now he’s entangled in an ancient conspiracy that dates back to the Salem Witch Trials, a far cry from the simple assault case the woman wanted him to solve.His budding romance with the witch Abigail will have to be put aside as he travels the Pacific Northwest with estranged friend and former partner Kelly Martinez to discover who these people are and their goals.A coin, a five-year-old case, the Malleus Maleficarum, televangelist and motivational speaker Tony O’Stein, Pope Innocent VIII, and a secret society all tie back to a tragedy from Peter’s childhood and he will need to figure out what it all means and a solution.Though many witches live amongst us, they are also part of a secret society but their clandestine organization seems to have been discovered which has led to a new wave of persecution. Internal tensions were already high and the attacks have only exasperated the issues. Peter must expose the members of the conspiracy and thwart their nefarious plans before an even bigger tragedy strikes.Magic Once Removed is available for purchase in print and ebook formats. Book Details: Magic Once Removed By James Kirst Publisher: World Castle Publishing Published: June 2020 ISBN: 978-1951642808 ASIN: B08B5JWQQV Pages: 299 Genre: Paranormal SuspenseAbout the Author: James Kirst lives in the Evergreen State in a humble little abode within the forested city of Dupont. There, he earned his Master’s Degree at the University of Washington. Commuting up north to Tacoma, he has worked as a senior programmer and software development lead for almost ten years.With a borderline obsessive interest in the paranormal, James has conducted an intensive study on the subject. To that end, he has visited some of the most haunted places in the United States including Salem, the LaLaurie Mansion of New Orleans, and his personal favorite, the Shanghai Tunnels of Portland, Oregon.As an avid fan of mystery both in fiction and in real life, he has done extensive research into police procedurals, the machinations of detective work, and life as a private investigator.A big sports fan, James is sure to either be watching or participating in one when not writing about or educating himself in one of the aforementioned subjects. In fact, he has won multiple championships in bowling and slow-pitch softball and has made several appearances as a softball All-Star where he was given the privilege of playing in Cheney Stadium. He is still seeking that elusive kickball title, however.Website: http://www.jameskirst.com Twitter: https://twitter.com/writerjrk Facebook: https://www.facebook.com/jameskirstauthor/ Instagram: http://instagram.com/writerjrk/ Promo Link: http://bookbuzz.net/blog/paranormal-suspense-magic-once-removed/ Purchase Links: https://www.amazon.com/Magic-Once-Removed-James-Kirst-ebook/dp/B08B5JWQQV/ https://www.barnesandnoble.com/w/magic-once-removed-james-kirst/1137177435?ean=2940163042425 https://www.kobo.com/us/en/ebook/magic-once-removed https://books.apple.com/us/book/magic-once-removed/id1518612630?mt=11&app=itunes https://www.smashwords.com/books/view/1027796 https://www.indiebound.org/book/9781951642808BookBuzz.net 59 Heritage Way Drive Rome, GA 30165Website: http://bookbuzz.net/blog/paranormal-suspense-magic-once-removed/BookBuzz.net helps indie authors, hybrid authors, and small publishers promote and market their books. We also help with book reviews, publicity, and more. Let's Create Some Buzz For Your Book!!!

01-31-2012 | IT, New Media & Software
CyberMatrix Corporation, Inc.
Clipboard Magic 5.0 Released
CyberMatrix has released version 5 of Clipboard Magic, a freeware Windows clipboard manager for plain text. This latest release contains several important new features to make copying and pasting text easier and more efficient. Clipboard Magic users can end up with many clips in one list that are difficult to differentiate between. For example, a technical support analyst using Clipboard Magic can have many similar canned responses that are hard
01-09-2012 | Business, Economy, Finances, B …
CreativeMentor
The New Excel Training Magic
Creative Mentor Training gives imparts Microsoft Excel Training Sydney for the people of different levels of skill. We impart Microsoft Excel courses in a perfect method to gain the skill required to create and edit spreadsheets with an ease. Our Excel training courses include both practical as well as hands on. We get you to work using the skill you learn during the entire period of the course. We also
05-25-2011 | Fashion, Lifestyle, Trends
Magic Logix
Magic Logix Announces Gloria's Night Life
Dallas, TX, April 26, 2011- Gloria’s Restaurant is a Latin American restaurant with 13 locations across Texas that serves traditional Salvadorian cuisine. In three specific locations, Gloria’s high end Latin American restaurant transforms into an energetic nightclub after 10 p.m. These locations include Arlington, Austin and Addison. The popularity of the restaurant’s weekend nightlife has illuminated into a culture, and even a way of life, for diehard Gloria’s customers. The
05-17-2011 | Fashion, Lifestyle, Trends
Magic Streetwear
Magic Streetwear Revamp Website Design
Bradford, United Kingdom (12 May, 2011) – Magic Streetwear, a leading online supplier of urban and hip hop clothing, announce the new features added to their website following a recent revamp. In a bid to increase the user-friendliness, functionality and aesthetics of their website, Magic Streetwear has renovated the site’s overall appearance and navigation. With new integrated features including an easier to use search function, and higher resolution, larger images, Magic
05-16-2011 | Fashion, Lifestyle, Trends
Magic Streetwear
Magic Streetwear Launch Spring/Summer Catalogue
Bradford, United Kingdom (12 May, 2011) – Magic Streetwear, a leading online supplier of urban and hip hop clothing, have launched their new catalogue of urban wear for the Spring and Summer 2011 seasons. Featuring brands already with a large presence on the Magic Streetwear website, as well as new and up and coming brands, the new Spring/Summer catalogue from Magic Streetwear features a selection of caps, tracksuits, shirts, jeans, t-shirts,
05-08-2006 | Industry, Real Estate & Constr …
Michael Richter - International marketing and sales consultant
Marketing = Magic formula?
Many marketing experts may say \"yes\", however, for me marketing (in this context - for investment-goods and long-lasting consumer goods) is simply the result of persistent dealing with the markets/partial markets, which are supplied by the respective enterprise with its products. One of the most attractive regions of the world surely is Europe – with its 480+ million inhabitants, especially also Germany with its 80+ million thereof. Insofar it
Comments about openPR
OpenPR is clearly structured and remains true to its principle of confining itself to the essential parts. OpenPR has proven to be a very good and reliable partner to our media agency: Within the shortest time the releases are online and go down well with the media representatives. The success of OpenPR is reflected in the steadily increasing number of press releases. It is good that OpenPR exists!
Ursula Koslik, Director Marketing & PR, F+W Hamburg