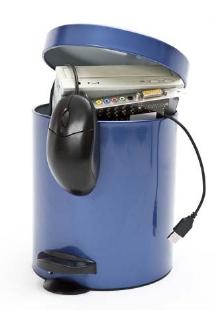 EU Directive 2002/96/EC came into force in 2003 to regulate the handling of waste electrical and electronic equipment (WEEE). The goals of the Directive are to reduce environmental impact from the disposal of electrical and electronics (E&E) products and promote special collection and recycling of these materials. Producers placing E&E products on the market are required by the Directive to protect the environment by funding their safe disposal.After nine years the Directive was seen as failing to achieve some of its goals, hence the legislation was recently revisited. On December 20, 2001 the European Parliament and the European Council agreed on amendments to the Directive, subject to a second-reading vote, which was taken on January 19, 2012.The changes affect the method for calculating collection rates, which were previously four kg per inhabitant per year. To provide a transitional period of seven years to introduce the revised method of calculation, the present method is retained for the first four years from the time the amended Directive comes into force. For the next three years, commencing with the fifth year after the amendment, the calculation of collection rates will be revised to 45% of the weight of E&E products entering the market. Once this seven years transitional period is over, EU member states will individually select the actual collection options they wish to use.The two options to choose from are 65% of the weight of E&E placed on the market or 85% of the weight of waste E&E. The EU goal is to recycle at least 85% of E&E waste by 2016.In addition, the amended Directive has undergone some simplification and will include only six categories of equipment after expiry of the transitional period instead of the original ten categories, according to Article 2, 1, (b) and Annex III. This apparently contradicts the also amended and related Directive 2011/65/EU (Restriction of Hazardous Substances “RoHS”), which now defines 11 categories. WEEE and RoHS both originally covered ten identical categories, but Article 2, 1, (b) and Annex I of the amended WEEE Directive, the ten categories will only apply during the transitional period. Alignment of the two Directives will be provided by further changes to WEEE after six years, with the introduction of a new ‘open scope’ concept.Only certain products were covered under the original WEEE Directive, but open scope will cover all equipment meeting the definition outlined in the Directive. Further important amendments include changes to the definition of a producer of E&E waste, extending it from ‘an entity that introduces equipment in a given state’ to ‘any entity placing equipment on the market’. Provisions call for storing harmonized registers of producers online, with information about them shared between member states.Another significant regulation introduced involves obligations for large E&E retailers to set up collection points for smaller items of used equipment, meaning that consumers will share the responsibility for safe E&E waste disposal and a further step toward ensuring the equipment is collected and recycled or reused.The changes to the Directive received overwhelming support in the European Parliament and now only await formal approval by the Council of Ministers in the next few weeks.About SGS Electrical & ElectronicsAs the world’s leading third-party testing company, SGS has well-established consultancy services covering a wide spectrum of product-related legal requirements. The SGS global footprint provides solutions appropriate to clients wherever they are. SGS experts can provide support for product compliance with national, regional and international regulations such as WEEE, RoHS (e.g. US, EU, China, Korea), CE marking, REACH/SVHC, battery regulations and other legislation related to consumer products. SGS is committed to satisfying client needs, be they chemical testing or services in the fields of inspection, certification, compliance assurance, outsourcing, training or auditing. SGS services also ensure client products will meet future market requirements, whatever the legal framework.SGS is the world’s leading inspection, verification, testing and certification company. SGS is recognized as the global benchmark for quality and integrity. With 70,000 employees, SGS operates a network of over 1,350 offices and laboratories around the world.SGS Consumer Testing Services Dr. Udo Krischke Global Technical Manager RSTS Im Maisel 14, 65232 Taunusstein, Germanyt: +49 (0)6128 - 744 235 E-mail: cts.media@sgs.com Website: http://www.sgs.com/pages/consumer-testing/sgs-consumer-goods-and-retail.aspx