win.rar GmbH announces record growth in their partner network for the year 2006 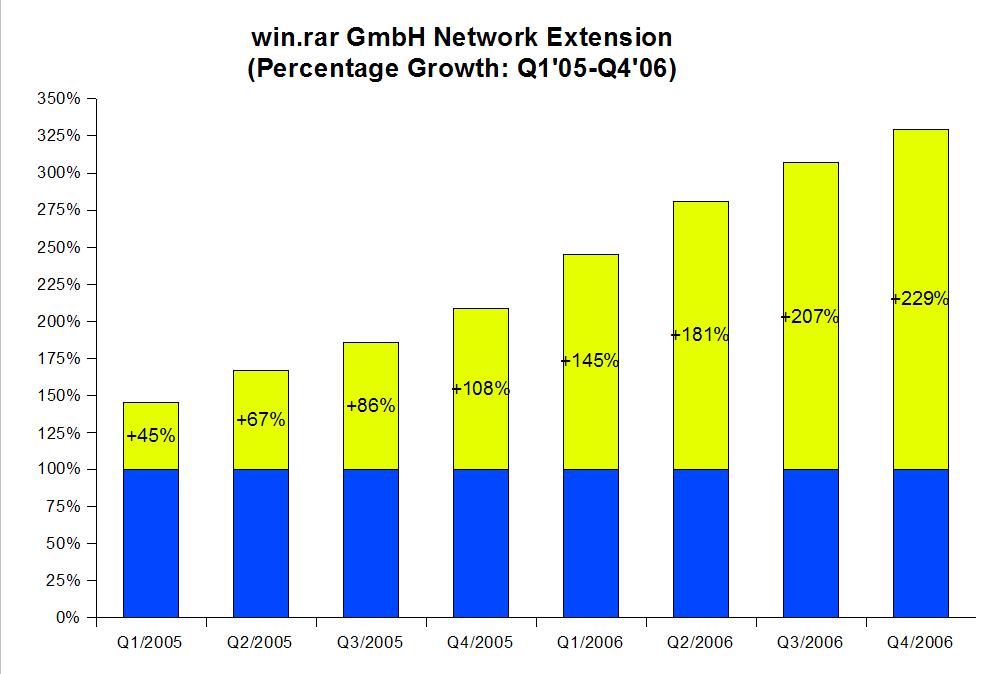 win.rar GmbH is proud to announce that it has been able to achieve approximately 230% overall growth in their partner network just within a period of two years. The growth in the number of partners was fueled by significant customer attraction, expansion into international markets, and attractive partnership programs allowing significant flexibility and benefits. Bremen, Germany --May 25, 2007--win.rar GmbH, publisher of RARLAB software and global leader in proprietary compression technology, today announced that it has seen record growth in 2006 in their partner network due to key service offerings and a calculated, pro-active partnership strategy. win.rar GmbH sells WinRAR and RAR through a worldwide network of affiliates, resellers and distributors. The company is uniquely positioned to continue on this growth path in 2007 and further solidify its position as a leader in the market. Since the introduction of its partner program in the year 2004, the company has seen steady increase in number of its strategic partners across the world. At the end of year 2006, the overall partner network growth has increased up to approximately 230% as compared to the end of year 2004. From this, affiliate's growth has been the fastest with more than 295%, followed by reseller's: more than 200% and distributor's: more than 60%. The company is represented globally through its local partners on 6 continents and in more than 80 countries. The WinRAR partner team is ambitious to make 2007, the year when their total number of partners will cross the four-digit barrier. “2006 was a pivotal year for win.rar GmbH; we have achieved a great deal in a relatively short period of time. We’ve realized more than impressive growth and added some of the most respected industry leaders to our partners list, including AdviceCom Distribution ApS (Denmark), Orbicraft Publishing (France), Cogito Solutions Limited (Hong Kong), CoGen Media (Japan), SoftKey (Israel), KAZ Group (Australia), Softcell Technologies Limited (India), Trade-UP Distribution GmbH (Germany) and many others” said Mr. Oencuel Kaya, the Managing Director of win.rar GmbH. “Our sustained growth is a direct result of relationships with our partners. By working closely with them, we ensure faster and simpler access of WinRAR to our customers across the world. We've got some challenging goals for 2007, but with our exceptional team and remarkable partner network we are sure about the continued growth in the year ahead and have great plans to better serve our existing customers.” About WinRAR WinRAR is a 32-bit Windows version of RAR Archiver, the powerful archiver and archive manager. RAR files can usually compress content up to 30 percent better than ZIP files. WinRAR's main features are very strong general and multimedia compression, processing of non-RARarchives, long filename support, programmable self-extracting archives(SFX), damaged archive repair, authenticity verification, embedded file comments, and encryption. WinRAR is available in over 45 different languages and runs on Windows 95/98/NT/2000/ME/XP/Vista. The command line version RAR is available for Linux, DOS, OS/2, FreeBSD and MAC OS X. Pocket RAR, the free WinRAR version for Pocket PCs and the new WinRAR for U3 complete the compression product range. So WinRAR simply is "The Size Solution". About win.rar GmbH win.rar GmbH is the official publisher for WinRAR and RARLAB products since February 2002 and handles all support, marketing and sales related to WinRAR & rarlab.com.win.rar GmbH is located in Germany and is represented globally through its local partners on six continents and in more than 80 countries. The company is dedicated to offering the highest level of quality support to its customers, and to constantly improving its software according to their needs and feedback. For more information about WinRAR and win.rar GmbH please visit www.win-rar.com win.rar GmbH Unser Lieben Frauen Kirchhof 10 28195 Bremen Germany Contact Information: Noopur Kapoor Bhandari E-mail: press@win-rar.com Tel: +49 421 63939-0 Fax: +49 421 63939-99

You can edit or delete your press release win.rar GmbH announces record growth in their partner network for the year 2006 here