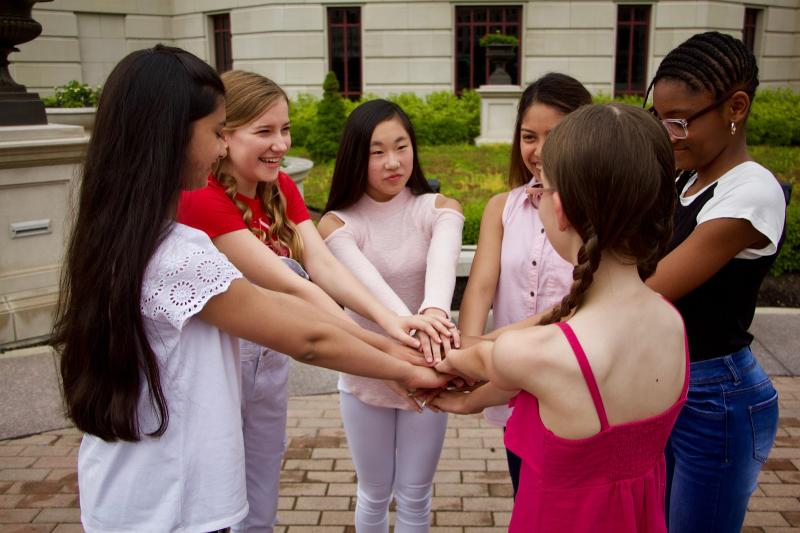 Keegan Connor 2nd on the left side

(Westfield, IN) - August 15, 2020: In the teen pop song “Dark Eyes,” 14-year-old Keegan Connor, uses music to send a message of inner light and equality. She spent 2-years working on what would become her first single release. On the inspiration of “Dark Eyes,” she told the Current newspaper, “I grew up in New York City, attending a school with kids of various ethnicities. When we moved to the Midwest, I began to notice kids with blue eyes were getting comments on how gorgeous their eyes were, and no one seemed to mention my dark eyes. Being a very social kid, I wanted to stand out, but I didn’t feel like I did. That’s how my song, ‘Dark Eyes,’ started blossoming into my message for equality and friendship.” Keegan says, “As I continued with the lyrics, the song became more for all people with dark eyes. No matter how we appear to others, we’re more alike than we are different.” Keegan’s song is a symbol for equality. She believes, “Every kid has something to offer. They are special and have their own gifts and talents. For instance, young kids just look for someone to play with them. They don’t pay attention to what they look like. It doesn’t matter where we live, we all have hopes and dreams.” It’s Keegan’s goal to help us all see beyond the color of one’s eyes and skin. The single was slated to be released in the fall of 2019, but Keegan was unexpectedly diagnosed with severe scoliosis, which resulted in her having VBT (Vertebral Body Tethering) spine surgery. Following her recovery, Keegan was ready to share her song and message with the world, and then Covid-19 postponed her live launch. This summer she released her song and is now releasing the music video for “Dark Eyes,” which features her friends (some from pageants). “Dark Eyes” is available on: iTunes, Apple Music, iHeartRadio, Amazon Music, YouTube, and Spotify...Keegan Connor's Media Contact:Name: Sheryl Matthys (primary contact) Title: Manager Email: info@successfulwomenmadehere.comName: Cwamne Howard Title: Publicist (Cwamne PR) Email: cwamne@cwamnepr.online Address: 2788 Conejo Dr San Bernardino, CA 92404About Keegan Connor:Since she was 3-years-old, Keegan Connor has been exploring singing and dancing. Keegan performs in musical theatre, and competes in pageants. She is a two-time winner of CarmelFest (2016 and 2018). Outside of performing, Keegan created her own nonprofit (Keegan Cares), that is focused on scoliosis awareness and raising funds for therapy dogs. When she’s not on stage, making music, or doing advocacy work; Keegan enjoys playing with her dogs and hanging out with her friends. Link to the "Dark Eyes" music video: https://www.youtube.com/watch?v=UkNEuJjo1rU