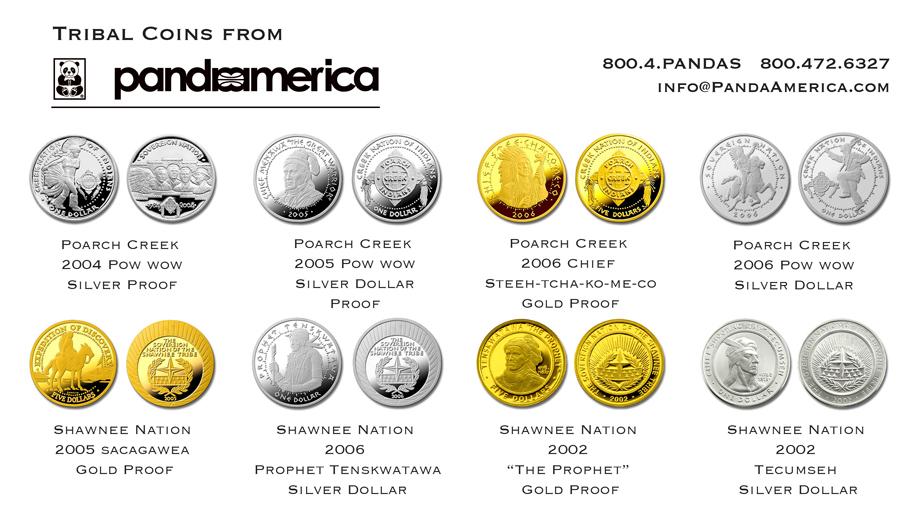 Images of the coins

The United States has issued many coins featuring American Indians. Now the Indians have turned the tables…and have issued their own coins! Panda America Corp., based in Torrance, California and located just 20 miles from downtown Los Angeles, is the leading commemorative coin company in the United States. They are currently working with Native American Indian Tribes on a series of officially minted coins depicting specific tribes that helps to build bridges of understanding between Indian Tribes and American citizens.The coin series began in 2002; with two tribes that they currently work with: the Poarch Band of Creek Indians and the Shawnee Tribe. The coins attracted considerable amount of attention not just in the coin industry, where collectors are consistently searching for American History items, but also among casual Americans looking to learn more about America’s History and Native Americans in general. Having a coin made of a specific Tribe helps in many ways, but most importantly it’s a way to gain positive exposure and create further understanding of each Tribe and its specific history. Peter Yeung, President at Panda America, says that for many tribes, it is a source of pride to see their Tribe featured prominently on a 1-ounce gold or silver bullion coin. In addition, the coins come handsomely packaged with a certificate of authenticity from the Tribe.Helping gain understanding and positive exposure is wonderful, but it is also great when the Tribes can gain financially as well. Every Tribe that has a coin issue featuring them receives a royalty from each coin that is sold, and with mintages as high as 100,000, the financial benefits for the Tribe can be a nice additional source of income that the Tribe can use however they choose.Because the coins are officially approved coins, Panda America has worked closely with each Tribe and each Tribe has approved every aspect of the process. Some Tribes choose to feature their logo or crest, while others feature specific individuals, former chiefs or leaders in the Tribes History, as well as pivotal events in the Tribes history.These Native American Tribe Coins create a sense of pride and accomplishment, while generating exposure and financial gain for the Tribe.If you are interested in being a part of the Indian Commemorative Coin program, you can do so by reaching William Graessle, Program Manager, at 310-373-9647. It’s a great way to promote positive goodwill among Indian Tribes and American Citizens.PANDA AMERICA CORPORATION EXECUTIVE SUMMARY Panda America Corporation, is the trade name used for a California Corporation founded in 1982. The company is located in Torrance, California. Panda America, which takes its name from the highly collectible Chinese Panda Coins, is in the coin industry as one of the key distributors of international collectible modern issue coins from around the world. Panda America has earned a solid reputation as a creative marketing partner of some of the most important mints around the world. Panda America represents Australia, the Bahamas, China, Canada, France, Laos, Liberia, Myanmar, Mexico, Nepal, Spain, Singapore, Thailand, Ukraine, United States (Olympic Issues), Vietnam and a number of smaller countries and areas. Some of these relationships go back as far as 25 years. The company acts as the marketing arm for the central banks or mints of these countries outside of their own domestic market territory. The company is a marketer and distributor of collectible coins produced in gold, silver, platinum, palladium and base metals. We were chosen by China in 1982 to be one of only two official distributors of Panda coins in the United States. We have represented the China Mint ever since, and the Panda coins continue to be our premier coin product. Other key product categories include Yearly Lunar Zodiac coins, Mexican Libertad coins still minted from the first mint in the Americas, British Britannias and Soverign coins, and Innovative coins that combine imagination with technological advances to produce coins in color and holograms. We offer a wide variety of collector coins ranging from ancient times to those issued by the United States over the past 200 years. We also mint coins and metals for governments, associations, and individuals. We are proud of our reputation for excellent service as one of America’s leading coin companies, as is attested to by thousands of satisfied customers, and letters from the Treasurer of the United States. Our CEO, Kitty Quan, is a member of the American Numismatic Association and our President, Peter Yeung, is a life member of the ANA -and we abide by the Codes of Ethics of the American Numismatic Association. We are looking forward to establishing a long term relationship with you. If you have any questions, please do not hesitate to contact us or see us at our website, www.pandaamerica.comPanda America 3460 Torrance Blvd. Suite 100 Torrance, CA 90503 Contact Information: William Graessle Marketing/Business Development 1-800-472-6327 extension 230

News-ID: 21082 • Views: 4185
Comments about openPR
OpenPR ist the nicest and most clearly laid out PR platform I have seen to this day. The press releases are displayed very nicely and clearly and without any unnecessary frills. The updates are fast and the finished release looks appealing and is clearly legible. Even with 16 years of experience one discovers new things from time to time. Congratulations!
Gabriele Ketterl, Director Marketing & PR, Menads