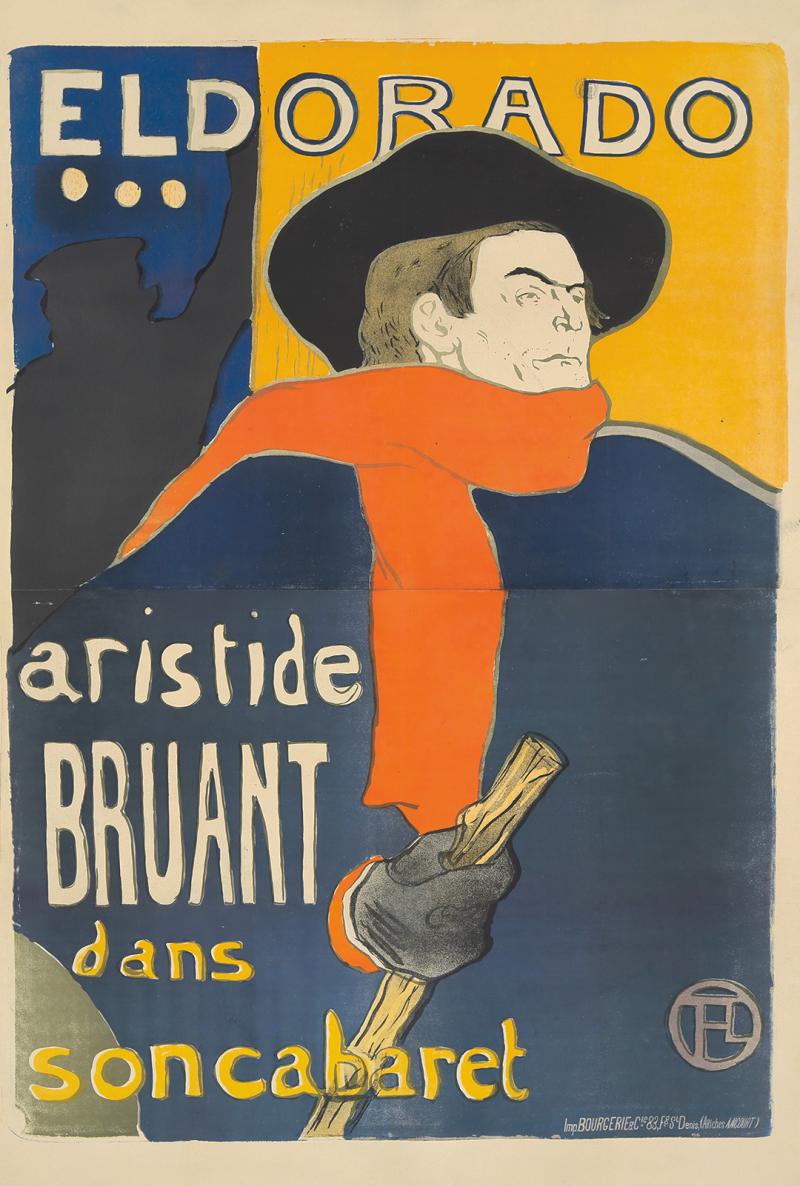 New York, NY, USA, August 6, 2020 -- Poster Auctions International’s (PAI) second sale of the year, on July 21st, finished at $1.3 million in sales. Auction LXXXI proved an ongoing passion for posters.Jack Rennert, President of PAI, said, “This auction was anything but typical. We’re in the midst of a global pandemic, and this was also our first auction in 35 years to not feature our traditional and highly regarded printed catalogue. Despite this, we received a strong showing of support, which both surprised us and gratified us. We were also pleased with the ongoing response to Art Nouveau works, which have proven to captivate both new and seasoned collectors.”The great mythologizer of Montmartre, Henri de Toulouse-Lautrec, maintained his appeal to bidders. His 1894 Eldorado / Aristide Bruant, originally denigrated by the venue’s management, reached its highest sales price in our auction history: $78,000 (all prices include premiums). Similarly, his triumphant 1896 La Chaîne Simpson—at auction for the first time in nine years—soared to a record-breaking $72,000. Another design for the famed cabaret star, Aristide Bruant Dans Son Cabaret, from 1893, claimed $43,200.The zest for Art Nouveau works continued with Alphonse Mucha, whose ornate designs remain a staple for collectors. Two sets of his revered decorative panels for the four seasons claimed top sales: the 1896 set of The Seasons was won for $43,200; a rare variant with the imprint of L. Brancher, from 1900, reached $45,600. His seductive Moët & Chandon, from 1899, was claimed for $31,200. His radiant 1896 Job, estimated at $15,000-$20,000, soared to new heights with a winning bid of $29,520.Concurrent with Art Nouveau, Spanish Modernisme heralded the revival of Catalan art and culture. One of the era’s masters, Alejandro de Riquer, spurred impressive bids; his 1900 The Four Seasons, estimated at $7,000-$9,000, garnered $12,000; the 1896 Ayuniamiento de Barcelona exceeded its estimate of $3,000-$4,000 for a total of $9,600. Back in France, another top work of the era, Auguste Roubille’s ca. 1909 Spratt’s Patent Ltd., was won for $10,800.For the Art Deco era, Leonetto Cappiello retained his throne. The ebullient ca. 1907 Cognac Gautier Frères achieved its highest sale to date of $9,600. His wonderfully exaggerative Lane Borgosesia, from 1927, reached a winning bid of $5,040. The standout lot, however, was his dynamic design from 1928 for Porto Pitters which has not been available at auction in 30 years. Collectors clamored for the opportunity: estimated at $8,000-$10,000, it topped out at $21,600.Charles Loupot also maintained his dominance in the field of Art Deco. His energetic 1925 Huile Raoul Citroën—last offered in 1995—was claimed for $16,800. And a full-scale maquette, recovered from the artist’s studio, a 1947 preliminary design for St. Raphaël, garnered $43,200.Rarely seen posters continued to excite poster lovers. Henry Bellery-Desfontaine’s 1905 Automobiles Georges Richard was offered with the complete text for the first time; its estimate of $12,000-$14,000 was swiftly surpassed for a win of $19,200. Edward Penfield’s statuesque The Northampton Cycle Co., from 1900, made its first appearance since 1990; it achieved a winning bid of $10,800. Leon Hingre’s robustly detailed Fards Dorin, from ca. 1898, was new to our auctions; it was claimed for $4,560, against an estimated $2,000-$2,500. Another never-before-seen poster from the same year, Hippo-Dup’s Alcazar d'Eté / Miss Foy, surpassed its estimate of $2,500-$3,000 for a $6,600 win. From Privat Livemont, a small-scale but incredibly detailed maquette for J. C. Boldoot from 1899 was won for $4,080, though estimated at $1,400-$1,700. And A. Molusson’s ca. 1937 Trouville / La Piscine, last available in 1998, made $4,080.Poster Auctions International’s next sale will be held in New York on November 15th, 2020. Consignments are accepted until September 1st. To learn more, please visit www.posterauctions.com.Jessica Adams Poster Auctions International 26 West 17th Street New York, NY 10011 (USA) 212-787-4000 jadams@rennertsgallery.com http://www.posterauctions.comWe’re one of the very few auction houses in the world dealing exclusively in rare, original vintage posters. Since the late 1980s, we’ve held auctions 3-4 times a year. Poster aficionados, enthusiasts, collectors, galleries, and leading art museums around the world value Rennert’s Gallery as one of their most trusted venues for successful consignments, unique buying opportunities, unequaled experience in the field, and an impeccable eye for quality in original poster art.