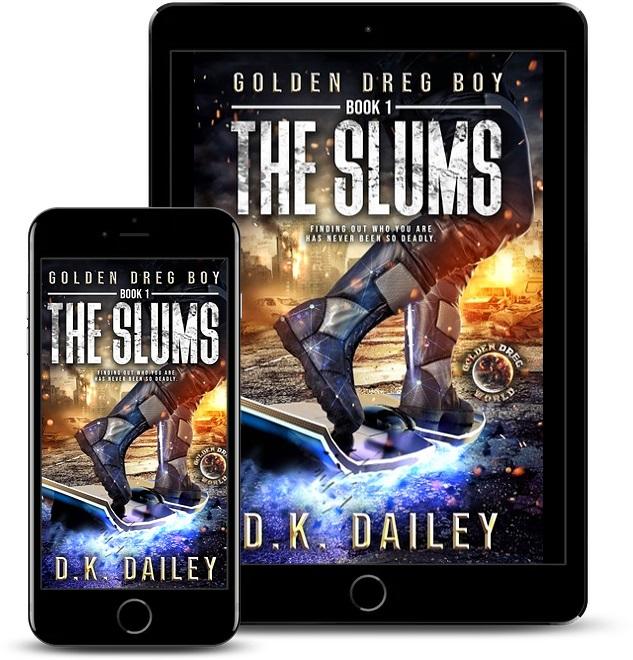 Author D.K. Dailey is pleased to announce the upcoming release of her new young adult dystopian science fiction novel, Golden Dreg Boy, Book 1: The Slums. Due out for release on July 2, 2020, the book is already receiving rave reviews from readers and reviewers.

Finding out who you are has never been so deadly.

In the ruins of San Francisco California, survivors of an epidemic that swept the nation have pooled inside the cities, restructuring life as we know it. Now it’s the strong against the weak; the rich Golden against the poor Dreg.

The Golden govern everything. Living above the city in four sectors, they look down on the Dreg slums. Against all odds, the Dreg have become survivors. Unable to afford proper care, their immune systems have adapted to protect them against the diseases now infecting the Golden.

Seventeen-year-old Kade Shaw is a privileged Golden. Kade and his family have the best money can buy, living in the wealthiest area of Sector One. A bored rich kid, Kade’s tired of his mundane life, and regularly sneaks out to the skate park and the slums to take risks and feel alive—maybe even kiss a Dreg girl or two. Until one night at an illegal party, everything goes horribly wrong.

When the cops accuse Kade of falsifying his Golden status, an offense that carries a death sentence, he is forced to question his true heritage after his powerful parents won’t save him. Then, on the eve of his execution, he’s rescued by a guerilla Dreg group—but why? What do they want from him? As he lives with them in squalor, trained in raiding for food, fighting, and how to survive, he slowly gains respect for the Dreg people, seeing them as more than “other”, confusing the age-old lines of good and bad. But despite his infatuation with Saya, a beautiful Dreg girl, Kade still wants his old life back.

In the brewing deadly war between rich and the poor, Kade must make a choice between fighting for his Golden status or helping the Dregs who saved his life. Golden or Dreg?

About the Author:
D.K. Dailey has a problem: kind of like I see dead people but for writers. Good thing she fuels that creativity to build worlds and create people who do what she says-well, most of the time. She often says, if she wasn't a writer, she'd be certifiably crazy.

Dailey's writing journey started as a child when she began writing sci-fi short stories, a result of watching countless hours of Star Trek on a shared TV with her parents. With an inborn passion for telling stories, writing songs and poems, her hobbies erupted into a career path after she penned a play in college and then her first novel. As a writer of color living in Northern California being immersed in a tapestry of culture and history has consistently inspired and helped D.K. Dailey pen numerous books.

BookBuzz.net helps indie authors, hybrid authors, and small publishers promote and market their books. We also help with book reviews, publicity, and more. Let's Create Some Buzz For Your Book!!!