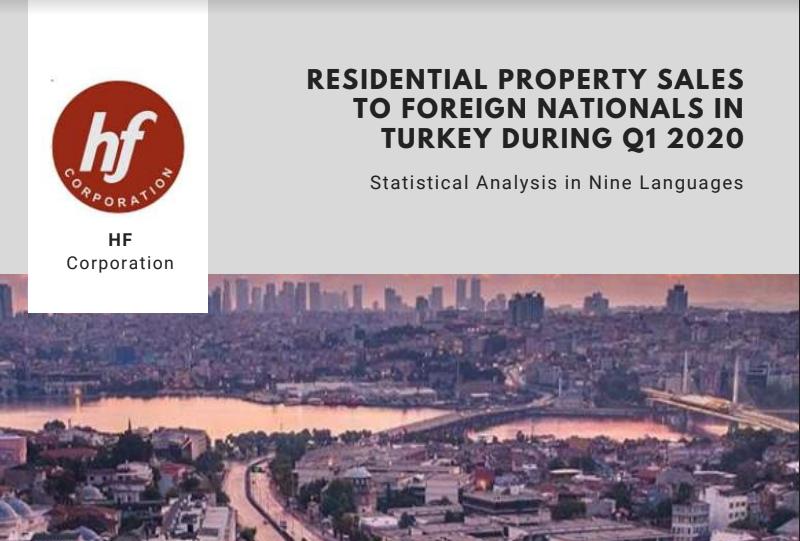 Lahore/Istanbul - HF Corporation has released the third edition of its research-based report on residential property sales to foreigners in Turkey. The report, which uses data from the Turkish statistical institute, reveals that foreigners bought 10,948 houses in Turkey during the first quarter of 2020, thereby marking an increase of 14% compared to the same period of the previous year. The report is accessible via the below mentioned link:https://hfcorporation.co/turkeyThis interesting and unique report presents the statistical analysis of the top foreign buyers in nine (9) different languages - English, Persian, Arabic, Russian, German, Azerbaijani, Chinese, Swedish, and Urdu. According to the statistics, some of the top foreign buyers of Turkish residential properties during this period originated from the following counties:Iraq (1,864); Iran (1,856); Russia (763); Afghanistan (644); Yemen (386); Jordan (334); Germany (328): China (251). Investors from Saudi Arabia, Azerbaijan, the UK, Sweden, and Pakistan were also among the top-20 nationalities buying houses in Turkey. The most remarkable year-on-year increase was in the case of Chinese (332%), Pakistani (130%), and Iranian (97%) nationals. Highest number of houses during this period were sold in Istanbul (5,375 houses), Antalya (2,151 houses), Ankara (665 houses), Bursa (371 houses), and Yalova (339 houses). "Turkey, because of its natural beauty, history, and strategic location, is an attractive place for owning a property. The reforms in the Land Registry Law in May 2012 have made the acquisition of real estate in Turkey convenient for citizens of a large number of countries within the scope of legal restrictions. The launch and subsequent restructuring of the citizenship-by-investment program by Turkey are further fueling the interest of Middle Eastern and Asian investors in Turkey's real estate sector," commented Dr. Hussain Farooq, President and chief citizenship specialist at HF Corporation, a firm that advises its discerning clientele on the global citizenship-by-investment programs in addition to publishing some of the most comprehensive reports in the citizenship industry."In the first quarter of 2020, when the G-20 area experienced the largest real GDP contraction since the time series started, Turkey was one of the only two G-20 countries recording positive growth. Foreigners' appetite for Turkey's residential property market also remained strong during this period. While Q2 is somewhat slow in terms of foreign investment - owing to lockdown, and global travel restrictions - we are experiencing increased demand in inquiries that makes us expect a strong 3 and Q4," concluded Dr. Farooq.HF Corporation Suite 3, Level 1, Cantt. Board Plaza, Tufail Road, Lahore, Pakistan, 54000.HF Corporation is a citizenship- and investment-advisory firm that advises high net-worth individuals on the acquisition of second citizenship and residence in different countries, including Turkey. The firm also has a government advisory department that offers assistance to different governments to help them in building strategies for increasing foreign direct investment in their countries.

07-27-2020 | Industry, Real Estate & Constr …
HF Corporation
Over 14,000 foreign nationals bought homes in Turkey during the first half of 2 …
Lahore/Istanbul: During the first half (H1) of 2020, 14,413 foreign nationals bought 14,262 homes in Turkey, according to HF Corporation, an advisory firm that specializes in advising individuals and families on the acquisition of real estate and citizenship in Turkey. https://hfcorporation.co/turkey According to the statistics published by Turkish Statistical Institute, the highest number of foreign buyers originated from the following countries, among others: Iran, Iraq, Russia, Afghanistan, Yemen, Azerbaijan, Jordan, China, Germany, Palestine,
04-02-2020 | Tourism, Cars, Traffic
HF Corporation
Travel Restrictions Index, a report by HF Corporation on global travel restricti …
Citizenship, immigration and passport advisory firm, HF Corporation, has released its report on travel restrictions imposed by countries, across the globe, amid corona virus pandemic. The report titled 'Travel Restrictions Index' provides the readers with restrictions imposed by more than 150 countries, and territories, on incoming travelers amid this unprecedented situation. This comprehensive report also takes into account the entry restrictions announced by different overseas territories or regions that implement
02-10-2020 | Industry, Real Estate & Constr …
HF Corporation
Foreign investors bought more than 45,000 houses in Turkey during 2019
Lahore/Istanbul - HF Corporation has released the second edition of its research-based report on sales of residential properties in Turkey to foreign buyers. The report, which uses data from Turkish statistical institute, reveals that more than 45,000 houses in Turkey were sold to foreign buyers during 2019, an increase of 14% compared to 2018. The report can be accessed via below mentioned link: https://hfcorporation.co/turkey A striking feature of this report is the
05-20-2019 | Business, Economy, Finances, B …
HF Corporation
Citizenship Advisory Firm HF Corporation Strengthens its Footprint in Levant
HF Corporation, a citizenship and immigration advisory firm known for its client centric and transparent approach, further strengthens its presence in the Levant region through appointment of Mr. Mohammad Abuawwad as a Business Development Specialist. The move comes as part of the firm’s strategy to further cement its presence in the Middle East and Asia and will enable the firm to provide bespoke citizenship advisory services to its discerning clientele

04-25-2018 | Health & Medicine
Gur Hair Transplant
Hair Transplant in Turkey
Istanbul is not only recognised with its world-famous Bosphorus Bridge any more. It is the first city comes to mind in hair transplant operations globally. Moreover, one in every five people in the world travels to Istanbul for medical tourism to undergo a hair transplant procedure. If you surf the internet and use search engines, you will come across with an enormous number of advertisements, clinics, hospitals, doctors and even
02-05-2018 | IT, New Media & Software
MarketResearchReports.biz
Turkey: Country Intelligence Report
"Turkey: Country Intelligence Report", a new Country Intelligence Report by GlobalData, provides an executive-level overview of the telecommunications market in Turkey today, with detailed forecasts of key indicators up to 2022. Published annually, the report provides detailed analysis of the near-term opportunities, competitive dynamics and evolution of demand by service type and technology/platform across the fixed telephony, broadband, mobile and pay-TV segments, as well as a review of key regulatory
06-30-2017 | Energy & Environment
Kuick Resarch
Turkey Power Sector Analysis
The power sector in Turkey is a highly evolved and efficient sector, being supported by an extremely favorable and facilitative government policy and regulatory regime. The power sector is divided into three sub-sectors in Turkey, namely the generation, transmission and distribution sectors. The power generation sector in Turkey is fully competent to meet the domestic demand. Furthermore, the country is also capable of supplying electricity to neighboring nations in Europe and
06-12-2017 | Industry, Real Estate & Constr …
ReportsWorldwide
Agrochemicals Market in Turkey
ReportsWorldwide has announced the addition of a new report title Turkey: Agrochemicals: Market Intelligence (2016-2021) to its growing collection of premium market research reports. The report “Turkey: Agrochemicals: Market Intelligence (2016-2021)” provides market intelligence on the different market segments, based on type, active ingredient, formulation, crop, and pest. Market size and forecast (2016-2021) has been provided in terms of both, value (000 USD) and volume (000 KG) in the report. A
06-05-2017 | Business, Economy, Finances, B …
ReportsWorldwide
Cigarettes in Turkey, 2016
ReportsWorldwide has announced the addition of a new report title Cigarettes in Turkey, 2016 to its growing collection of premium market research reports. "Cigarettes in Turkey, 2016" is an analytical report by GlobalData that provides extensive and highly detailed current and future market trends in the Turkish market. The report offers Market size and structure of the overall and per capita consumption based upon a unique combination of industry research, fieldwork,
07-11-2011 | Tourism, Cars, Traffic
Tuvana Hotel
Trekking In Turkey – Lycian Way
Turkey is one of the most popular holiday destinations thanks to its beautiful Mediterranean coast with top quality sandy beaches. Not many people know trekking hobbyists also can find entertainment in this amazing country. The Lycian Way, which takes its name from the ancient civilization which once ruled the area, has become one of the world's best known long-distance footpaths. The Sunday Times announced it one of the ten most beautiful
Comments about openPR
OpenPR is clearly structured and remains true to its principle of confining itself to the essential parts. OpenPR has proven to be a very good and reliable partner to our media agency: Within the shortest time the releases are online and go down well with the media representatives. The success of OpenPR is reflected in the steadily increasing number of press releases. It is good that OpenPR exists!
Ursula Koslik, Director Marketing & PR, F+W Hamburg