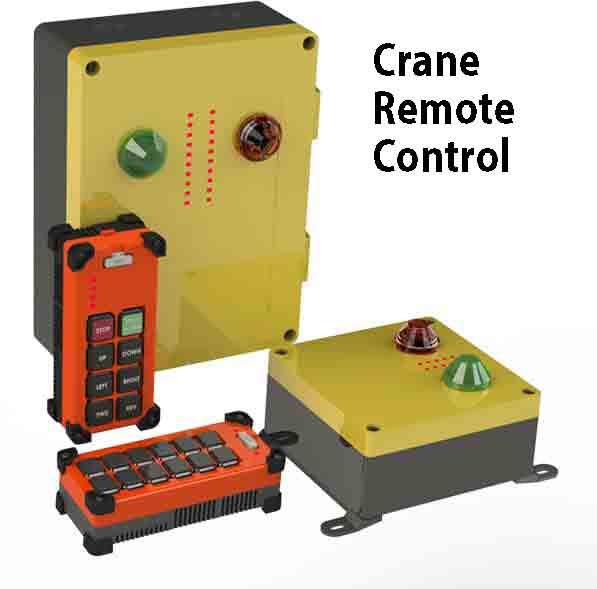 Radio remote controls come in different shapes, sizes and technologies. But they have one thing in common which is that all of them are handheld. Handheld radio remote controls need to be ergonomic and Lightweight. Anand Systems engineering specializes in remote controls for industrial cranes. Website: https://www.anandcontrol.com/radio-remote-control/anand-remote.html The remote controls come in two categories, Joystick based remote control or Push button-based remote controls. Push buttons have been used in various appliances to interface with machines. They have been utilized in mobile phones, calculators, kitchen appliances, industrial HMI, keyboards. The push Buttons remote controls have many advantages and few cons. Let's talk about the advantages first. • Push button remote controls can be used by a single hand. • They are light in weight. • The force required to activate push buttons in around 600 grams. • Push buttons come in two varieties, single step or double step. • Single-step push buttons are used for cranes having on a single speed. Double Step push buttons are used for cranes that have two speeds. Namely Micro speed and Full speed. • Up to 20 push buttons can be assembled on a handheld transmitter. • Various functions can be assigned each push button. • Either momentary or latch type pushbuttons can be used depending upon the application. • Event-driven programming is usually used to detect which button is pressed. • Matrix-style row and column circuitry reduce the number of I/Os to interface a keyboard with the microprocessor.Disadvantages of push-button type remote controls • More than two speeds are not possible. A maximum number of speeds in two speeds. • Debounce time of pushbuttons increases with age. For example, a new push-button might have a debounce time of 3 milliseconds, but the same push button 20,000 clicks later might have a debounce time of 30 millisecondsSingle Step push buttons can either be NO (normally open), Normally closed (NC), momentary ON – OFF – ON type, Latch type On – OFF. Push buttons can be mounted either on panel or PCB. There are many different types of mountings. It can either be a screw-type mounting, or a solder type mounting. In Solder type, pushbuttons come in through-hole type (THT technology) or SMD type. SMD type pushbuttons are easily assembled with the help of automatic pick and place machines. Great care needs to be taken when using pushbuttons, because of the mechanical bounce when the button is activated. The typical life of a push button is around 20,000-50,000 activations. Illuminated pushbuttons are also available, which assist the user. In Conclusion Push-button type radio remote controls are reliable, have very few cons and hence, they are used in industrial radio remote controls for controlling industrial machinery such as cranes.116 Acharya Industrial Estate, Tejpal Compound, Andheri Kurla Road, Sakinaka, Mumbai 400072.Anand Radio Remote Controls are highly optimized and customized for your Electric Overhead Crane. We offer a wide range of Crane remote controls to accomplish two goals: minimize production downtime with extremely high reliability and Increase Safety by meeting the highest possible safety standards. Please find here the tips for selecting a radio remote control for your crane.