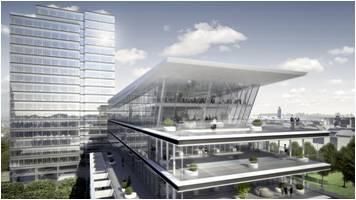 Cologne office of law firm GÖRG to move into around 6,800 square meters of rental space on Deutz side of the Rhine in 2013HOCHTIEF Projektentwicklung has let a further 6,800 square meters at the maxCologne office building in Cologne-Deutz: At the beginning of 2013 the law firm GÖRG will relocate its Cologne office and headquarters to the Deutz side of the Rhine. With this, the third biggest lease of 2011 in Cologne, GÖRG has secured almost two-thirds of the rental space at the Rheinetagen building. It will lease the five upper floors, with the option for an additional floor. With this latest lease, just under 93 percent of the space in maxCologne has already been let now one year before completion.The maxCologne complex also includes a 22-story high-rise. From 2013, the entire 38,000-square-meter rental space there will be used by the specialist chemical group LANXESS as its corporate headquarters. The two buildings are being refurbished in line with the criteria for Gold certification from the German Sustainable Building Council (DGNB) and have already received Gold precertification from the DGNB. maxCologne was acquired off-plan by Warburg-Henderson Kapitalgesellschaft für Immobilien for a special real estate fund. The sole investor is Rheinische Versorgungskassen. HIH Hamburgische Immobilien Handlung supported the acquisition as exclusive asset manager in Germany and is providing ongoing asset management for the owner.HOCHTIEF is one of the leading international providers of construction-related services. With more than 70,000 employees and a sales volume of EUR 20.16 billion in FY 2010, the company is represented in all the world‘s major markets. The Group‘s service offering in the fields of development, construction, services, concessions and operation covers the entire life cycle of infrastructure projects, real estate and facilities. In the USA, the biggest construction market in the world, HOCHTIEF is the No. 1 general builder via its subsidiary Turner and, with Group company Flatiron, ranks among the most important players in the field of transportation infrastructure construction. With its subsidiary Leighton (HOCHTIEF share around 54 percent), the Group is market leader in Australia. Because of its engagement for sustainability, HOCHTIEF has been listed in the Dow Jones Sustainability Indexes since 2006.HOCHTIEF Solutions consolidates the core business of the HOCHTIEF Group in Europe and in selected regions worldwide. The company plans, develops, builds, operates and manages real estate and infrastructure facilities. HOCHTIEF Solutions is the management company of the Group’s Europe division which employed around 15,000 people around the globe in fiscal 2010. In many regions and segments, the company is a market and innovation leader. HOCHTIEF Projektentwicklung is a fully owned subsidiary of HOCHTIEF and organizationally related to HOCHTIEF Solutions. Since 1991 the company has been developing, realizing and marketing real estate projects in Germany and abroad and is considered Germany’s leading inner-city developer. Its core business comprises office buildings in central business districts and areas within easy reach of city centers. It also focuses on retail properties, residential properties and accommodation for senior citizens, and the development of entire urban quarters. Hotels, distribution centers and special-purpose properties are also among the product market segments which the company addresses. HOCHTIEF Projektentwicklung does not build up any property portfolio of its own but operates as an “interim investor” with the goal of selling its projects to a final investor as swiftly as possible.HOCHTIEF Solutions AG Alfredstrasse 236 45133 Essen Germany Gabriele Stegers Head of Communications Real Estate Solutions Tel.: +49 201 824-2282 Fax: +49 201 824-1728 Email: gabriele.stegers@hochtief.de Web: www.htp.hochtief-solutions.com

04-10-2013 | Industry, Real Estate & Constr …
HOCHTIEF Solutions AG
HOCHTIEF Projektentwicklung lets further offices at Hirschgarten in Munich
Around 42 percent of rental space at office and business center at the Am Hirschgarten urban development has been let—Completion at end of 2013 HOCHTIEF Projektentwicklung has let 3,000 square meters of office space at the forum am Hirschgarten complex in Munich to Müller-Boré & Partner: The patent and legal firm will be occupying two complete floors in the more southerly of the two buildings. Almost 40 percent of the office
02-15-2013 | Industry, Real Estate & Constr …
HOCHTIEF Solutions AG
Almost 80 percent of apartments sold at Frankfurt’s Holbeinviertel
Four of five construction phases almost entirely sold in Sachsenhausen—one-third of first phase already occupied The HOCHTIEF Solutions residential developer formart and Wilma Wohnen Süd are building the Holbeinviertel residential quarter in Frankfurt-Sachsenhausen. 196 residential units are to be created in five phases on a former freight railway lot with an area of around 27,600 square meters. 37 of the townhouses (79 percent) and 117 condominiums have already been sold. The
02-15-2013 | Industry, Real Estate & Constr …
HOCHTIEF Solutions AG
HOCHTIEF Projektentwicklung: About 75 percent of Munich smarthouse let
Leases signed for 16,650 square meters—office and commercial building with child day care center completed in September 2012 HOCHTIEF Projektentwicklung has concluded further leases covering a total of around 1,900 square meters for the smarthouse in Munich: Communications system provider Avaya has the biggest lease on 1,600 square meters. The software developer Gracenote will occupy 600 square meters, while recycling consultancy firm, Carpe Dies Consulting has a lease for 320 square
02-07-2013 | Industry, Real Estate & Constr …
HOCHTIEF Solutions AG
maxCologne office complex in Cologne-Deutz fully let on completion
Law firm GÖRG Partnerschaft von Rechtsanwälten secures last available floor with 2,000 square meters of office space HOCHTIEF Projektentwicklung has now fully let the maxCologne office complex in Cologne-Deutz in time for the foreseen completion date: The 38,500 square meters of rental space in the 22-story office block are to be handed over to Lanxess in early 2013. At the end of 2012 the business law firm GÖRG Partnerschaft von Rechtsanwälten

03-29-2017 | Arts & Culture
Bartha Contemporary
Bartha Contemporary at Art Cologne 2017
Bartha Contemporary is pleased to announce their participation at the 2017 edition of Art Cologne. The presentation will feature a solo-exhibition of works by Alan Johnson from the 1970’s to the present day. Alan Johnston’s presentation at Art Cologne will feature works made over the past five decades. Since his first solo exhibition at Konrad Fischer in Düsseldorf in 1973, Johnston has continuously exhibited internationally. Indeed the exhibitions at Art
04-05-2011 | Arts & Culture
VernissageTV
VernissageTV at Art Cologne 2011
VernissageTV covers Art Cologne 2011 art fair and shows video art Basel, April 5, 2011 – As media partner of Art Cologne, VernissageTV art tv will cover Art Cologne 2011. The fair for modern and contemporary art will take place in Cologne, Germany from 13th to 17th April 2011. VernissageTV will provide its viewers with atmospheric shots from the fair, recordings of art talks, and in-depth interviews with artists, curators
11-04-2010 | Fashion, Lifestyle, Trends
Attracting Women Cologne
Launching of Attracting Women Cologne
http://www.AttractingWomenCologne.com was recently launched on 2nd October, 2010. The main objective of this site is to help man to attract ladies by using a special kind of cologne. Nowadays, a lot of men are facing trouble to get women. Some fail because they are shy, some fail because they don't know how and some did try but never succeed. In seeing this problem, the AttractingWomenCologne e-store was launched in order to
10-06-2010 | Media & Telecommunications
Teracue AG
WDR Cologne uses Teracue IPTV Encoder/Decoder
Live contribution of Cologne Cathedral and Rhine view into WDR's central broadcast infrastructure The West German broadcasting company (Westdeutscher Rundfunk - WDR) in Cologne uses IPTV encoder and decoder from Teracue to integrate live panorama images into their broadcast process. The WDR has installed a remote controlled camera in a weatherproof housing on a high-rise building on the eastern side of the Rhine river in Köln Deutz - opposite of the Cologne Cathedral. The camera can
07-08-2010 | Health & Medicine
Beta Klinik
Beta Klinik donates defibrillator to Cologne Golfers
Bonn, Germany. If the heart stops beating or its regular rhythm is interrupted, a defibrillator can save lives. Such a portable life-saver was given to Andy Clark of Clark´s Golfworld by Beta Klink. Not only visitors of the golf shop benefit from it but also all sportsmen and -women of the Golf Club Ford Cologne and the Public Golf Course Cologne, which is run by Clark. From time to time it
04-13-2010 | Arts & Culture
Bartha Contemporary
Bartha Contemporary at Art Cologne 2010
Bartha Contemporary London is pleased to announce the participation at Art Cologne – 44. Internationaler Kunstmarkt. The gallery showcase at Booth E30 in Hall 11 / Level 1, will feature seminal works by Jill Baroff, Benjamin Cottam, Clay Ketter and Beat Zoderer. The fair open’s on Tuesday April 20th and will run through to Sunday April 25th. Jill Baroff’s “Tide Drawings” and sets of “Floating Line Drawings” perfectly illustrate the
Comments about openPR
I can't but agree to the positive statements about your portal: easy to use, clear layout, very good search function, and quick editing!
Jens O'Brien, Borgmeier Media Communication