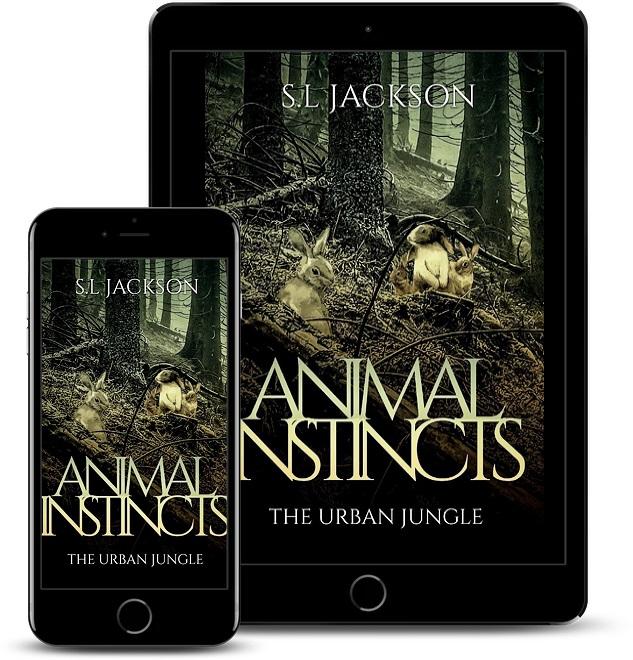 Author S.L. Jackson Releases New Urban Fantasy - Animal Instincts: The Urban Jungle Author S.L. Jackson is pleased to announce the release of his new urban fantasy, urban fiction book, Animal Instincts: The Urban Jungle. Released in March 2020, by Hostile Slurz Publishing, the book is already receiving rave reviews from readers and reviewers. For fans of J.K Rawlings, the re-branding of animals and jungles forever...Animal Instincts: The Urban Jungle is a collection of creative stories based on the lives of animals in an urban underworld jungle. The stories are focused around a family of outlaw rabbits who are fixtures in the criminal activities taking place in the jungle while trying to maintain a balanced life and family structure. Deceit and mistrust lead the rabbits down a dark rabbit hole of revenge and murder.There are no happily-ever-after's in these stories. Join the Jackson rabbits as they navigate their way through the urban jungle using their Animal Instincts.Book Details: Animal Instincts: The Urban Jungle By S.L. Jackson Publisher: Hostile Slurz Publishing Published: March 2020 ISBN: 978-1734168914 (print) ISBN: 978-1734168907 (ebook) ASIN: B082J84GHV Pages: 78 Genre: Urban Fantasy, Urban FictionAbout the Author: S.L. Jackson, an Urban Fantasy Author, from Inkster, MI, who now resides in metro-Detroit first entered the publishing scene in 2019 with the novella 'Animal Instincts: The Urban Jungle'. He is an auto worker, a community activist skilled in the art of urban jungle survival, a podcaster, and a former entertainer and entertainment education provider. You can always find him reading, watching, and listening to interviews, helping others achieve their goals, and busying with anything that challenges his creativity. "Writing is my way to escape," Jackson says.Even though his first novella 'Animal Instincts: The Urban Jungle' is considered an Urban Fantasy he prefers not to place himself in a box and stunt the growth of his creativity by limiting himself to one genre. He is the creator of the hashtag #respecturbanauthors. He has been nominated for several awards that include Feathered Quill Awards, Ippy/Elit Awards, Top Shelf Magazine Awards, and Top Shelf Book Cover Awards. His podcast "The Connected Experience" is a cultural and lifestyle show.Jackson is currently working on a comic book and cartoon series for 'Animal Instincts: The Urban Jungle'. His plans also include more books, awards, and his books placed in libraries across the world. "Animal Instincts: The Urban Jungle" has won the GOLD MEDAL award for "Short Story Fiction" at the 2020 eLit Book awards. Contact: Website: http://www.1sljackson.com Twitter: https://twitter.com/tcohhdotorg Facebook: https://www.facebook.com/sljackson522 Instagram: https://www.instagram.com/sljackson3/ Promo Link: http://bookbuzz.net/blog/urban-fantasy-fiction-animal-instincts-the-urban-jungle/Purchase Links: https://www.amazon.com/gp/product/B082J84GHV https://www.barnesandnoble.com/w/animal-instincts-sl-jackson/1135472754?ean=9781734168907 https://www.kobo.com/us/en/ebook/animal-instincts-the-urban-jungle https://books.apple.com/us/book/animal-instincts-the-urban-jungle/id1490921324?mt=11&app=itunes https://store.bookbaby.com/book/Animal-Instincts#amazon #urbanauthors #urbanfantasybooks #blackauthors #BookBuzzBookBuzz.net 59 Heritage Way Drive Rome, GA 30165Website: http://bookbuzz.net/blog/urban-fantasy-fiction-animal-instincts-the-urban-jungle/BookBuzz.net helps indie authors, hybrid authors, and small publishers promote and market their books. We also help with book reviews, publicity, and more. Let's Create Some Buzz For Your Book!!!

07-26-2017 | Arts & Culture
gisela graf communications
Urban Eurasia - Cities in Transformation
In these parts of the world, we see the city as an organism that has grown from individual and communitarian interests, economic forces, technical and cultural innovations - based on the communication between the different parties. It was different in the Soviet Union, where the urban space was implemented by the state or political elite according to its political objectives, and this as one of the fastest and most powerful
05-02-2017 | Associations & Organizations
German Center for Research and Innovation
Smart Cities and Urban Development
By 2050, the world's population is expected to reach nine billion, with over two thirds of people living in cities. On May 2, 2017, sustainability experts will convene at the German Center for Research and Innovation (GCRI) in New York to discuss future solutions for urban systems. Urbanization, globalization, demographic and climate change are continually placing higher demands on our cities. In order to achieve the goal of sustainable
02-23-2016 | Arts & Culture
Mojarto.com
Mojarto.com Presents The Urban Yogi
February, 23, 2016: Mojarto.com India’s largest and most innovative online art and collectibles platform presents The Urban Yogi - a special exhibition of artworks curated by leading art critic and writer Georgina Maddox. The curation that explores the balance between the states of agitation and peace in the urban existence features 13 leading contemporary artists namely Alok Bal, Arpana Caur, Gigi Scaria, G R Iranna, Jagganath Panda, KartikSood, Kathryn Myers,
10-29-2014 | Health & Medicine
German Center for Research and Innovation
Urban Health and City Planning
Urban environments and the planning processes that shape them are strong determinants of public health. On Monday, November 3, join city planners and healthcare experts at the German Center for Research and Innovation (GCRI) in New York for a discussion on how to plan healthier cities for the future. NEW YORK (October 28, 2014) – By 2050, over two-thirds of the world’s population will live in cities, yet we have only
02-25-2011 | Fashion, Lifestyle, Trends
The Urban Shopper
Urban Shoppers Talking Back
The Urban Shopper, a Shopping Lifestyle and Values web magazine targeted to Black and Latino females, has added new site features that now allow readers to email, print, and comment on articles. This is the latest improvement for the 10-month old web magazine which publishes editorial developed exclusively for the urban shopping experience. Last month, The Urban Shopper announced an agreement to publish findings from the Black Women’s Health Study,
02-18-2011 | Fashion, Lifestyle, Trends
Magic Streetwear
Magic Streetwear Add New Urban Clothing Collections
Bradford, United Kingdom (11 February, 2011) – Magic Streetwear, a leading online supplier of urban and hip hop clothing, announce a new range of urban clothing brands to their online store. Magic Streetwear pride themselves on their ability to provide their customers with the best international urban clothing brands on the market, such as Rocawear, Ringspun and Artful Dodger. Their hip hop clothing is incredibly affordable and competitive to their industry
Comments about openPR
I can't but agree to the positive statements about your portal: easy to use, clear layout, very good search function, and quick editing!
Jens O'Brien, Borgmeier Media Communication