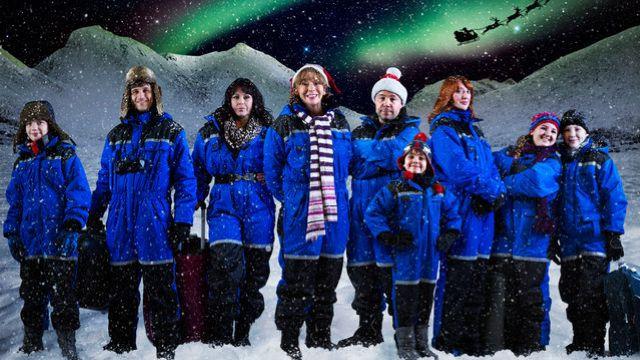 Chartridge Conference Centre was magically transformed into Lapland-style ‘Hotel Santa’ when it was used by BBC One to film its Christmas Day comedy drama special, ‘Lapland’.The bittersweet comedy features the Lewis family from Birkenhead who save all year to make Christmas special. This year they decide to really push the boat out and book a package tour to Finland to see Father Christmas, complete with huskies and reindeers and, maybe even the Northern Lights. But when they get to Lapland, things don’t go quite to plan!Headed by The Royle Family’s Sue Johnston, the impressive cast includes Stephen Graham from This Is England, Elizabeth Berrington (Secrets And Lies), William Ash (Waterloo Road), Julie Graham (Survivors), Zawe Ashton (Fresh Meat) and Keith Barron (Benidorm).The programme was schedule to be filmed in two different locations, the interior scenes in the UK and the exterior scenes in Lapland itself. Location Manager, Jo Randal was tasked with finding the venues and explained why she chose Chartridge. “Living in Amersham I was already familiar with the venue and I had heard from other location managers that it was extremely film-friendly. When Chartridge’s manager Stephen Quigley heard that I was looking for a venue, he rang and invited me to visit.” “As soon as I walked through the doors I knew it had great potential as our Lapland hotel. There was real warmth about the place and the communal rooms had loads of charm and character and were large enough to accommodate our film crew. I could imagine how it would look styled with Nordic Christmas decorations. I had found my UK venue.“The interior scenes for the comedy were filmed over a two-week period. Manager Stephen Quigley was extremely pleased with the excellent feedback from cast and crew on the flexibility and support of his team and how well they coped with every request throughout the shoot. He said: “Everybody really enjoyed the experience. The BBC crew made sure that they co-ordinated the filming from our customer’s perspective and managed to schedule filming around the weddings and conferences that were already booked. We were delighted to be part of the programme and it was a very successful event.” -Ends-More about Chartridge Conference Company The Chartridge Conference Company runs and manages four dedicated conference and meeting venues located in the Home Counties and West Midlands. All CCC venues are set in out-of-the-ordinary locations that provide the perfect secluded environment for meetings. All venues provide the highest standards of fully equipped training facilities in rooms that are bright, inviting and adaptable with on-site technical support. Superb food is created with care and flair by dedicated chefs, and when the learning is over, delegates can relax in style in beautiful and peaceful surroundings. The ethos of CCC is to successfully combine total professionalism, excellent value in a friendly relaxing environment. CCC is a member of MIA and Conference Centres of Excellence.For further information about Chartridge Conference Company visit www.chartridge.co.ukColin Caldicott, Ultimedia Public Relations Tel: 01767 601470 E-mail: colin@ultimediapr.co.uk

03-13-2017 | Science & Education
Seppo.io
GESS what? Finnish educational startups land in Dubai!
Finnish startups are attending the GESS education event in Dubai. Finland is the leading country in basic education and now Finnish startups are aiming at revolutionizing learning around the world. Their products are designed to bring gamification and fun into learning while using latest technologies and pedagogical research. Five companies are displaying their products in Dubai at the GESS event March 14-16th 2017. GESS is the largest educational event in
10-11-2016 | IT, New Media & Software
BlueVenn
BlueVenn help Hotelplan UK deepen its customer insight
Bristol, UK, 2016-Oct-11 — Hotelplan UK, a group of leading specialist tour operators, complete a project with BlueVenn to provide a database management, Single Customer View and customer analytics solution. Hotelplan UK has chosen multi-channel marketing solutions provider BlueVenn to help the company develop a Single Customer View for brands, Inghams, Ski Total, Esprit and Santa’s Lapland. With a plan to use BlueVenn's Single Customer View and the marketing campaign software, Hotelplan
09-27-2016 | Fashion, Lifestyle, Trends
Santa Claus of Arctic Lapland Ltd.
Santa’s own Post Office has opened a new website
If there is a better way to surprise children and friends, it is through the letters from Santa Claus himself. Santa’s own Post Office has opened a new website www. santapost.org. You can order original Santa Letters in many languages: English, French, Italian, Polish, Spanish, German, Japanese, Finnish, Chinese and Russian http://www.santapost.org/ There are several different Christmas Letters that customers can choose from. From Classic Christmas Letters to Luxury Letters from
06-16-2010 | Arts & Culture
Konzertdirektion Schmid
John Storgårds steps in for Mariss Jansons with the Bavarian Radio Symphony Orc …
Hannover, 15 June 2010. John Storgårds, Chief Conductor of the Helsinki Philharmonic Orchestra, makes his debut with the Bavarian Radio Symphony Orchestra on 24th June, stepping in for an indisposed Mariss Jansons. On the programme in Munich´s Herkulessaal is Schumann´s “Spring Symphony“, Stravinsky´s Violin Concerto D major op. 61, with soloist Gil Shaham, and de Falla´s ”The Three-Cornered Hat“. The concert is repeated on 25th June and will be broadcast
02-03-2007 | Logistics & Transport
Messe München GmbH
transport logistic 2007 showcases the possibilities and the limitations of RFID …
Used in the Future Stores in Germany, for locating reindeer in Lapland and securing laptops in Brazil, radio frequency identification (RFID) has made tremendous strides around the world in recent years. The logistics industry also has great hopes of this technology. Just what RFID applications are possible and practical in this field is one of the themes showcased at transport logistic 2007. Between 12 and 15 June 2007 scientists, software developers
11-13-2006 | Leisure, Entertainment, Miscel …
HONKA
The first official visit of the real Santa Claus to City of London - Honka pro …
Finland and the Finnish Santa Claus will be in the limelight next Saturday, November 11 in the historical show of the Lord Mayor of the City of, which will include a parade and fireworks. This will be Santa’s first official visit to the City, and he will be one of the stars of the procession. Santa Claus will travel through City in a spectacular 15metre long float, which displays a Finnish
Comments about openPR
We publish our press releases on openPR.de because we like people who are "open" - just like us.
Frank Obels, CEO, INCONET - Informationssysteme, Communication und Netzwerkberatung GmbH