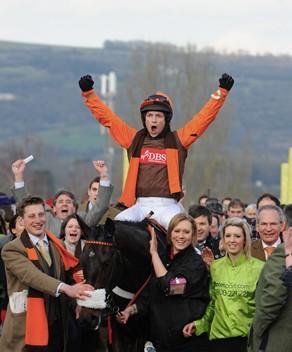 Racegoers to benefit from bespoke travel packages through the new dealThe Jockey Club, the largest commercial group in British horseracing, today announced a three-year agreement for leading travel provider Thomson Sport to become its Official Travel Partner.The new partnership will see Thomson Sport develop travel packages for some of the most popular racing fixtures staged at The Jockey Club's 14-strong portfolio of racecourses, including the John Smith's Grand National Meeting at Aintree, the Cheltenham Festival, the Investec Derby Festival at Epsom Downs, the William Hill Winter Festival at Kempton Park and the QIPCO Guineas Festival at Newmarket.Packages will include race tickets and transport, as well as optional extras such as meals, hospitality, hotel accommodation and other bespoke elements. They will also be developed around The Jockey Club's popular music nights, which welcomed more than 500,000 people to its venues in the last two years.Simon Bazalgette, Group Chief Executive of The Jockey Club, said:"As a best-in-class travel brand with a strong track record in sport, we're delighted to partner with Thomson Sport. Together we can offer fans of racing, sport and live events a host of special experiences to remember."This year, British racing has enjoyed increased attendances and TV audiences. We stage some of the best events in the world at our venues and working with the right partners can help us to broaden our sport's appeal and keep growing."Tom Forshaw, Managing Director of Thomson Sport, said:“We’re thrilled to be partnering with The Jockey Club and for the opportunity to help racegoers see and live the full track experience. Fully inclusive packages will mean enjoying a day at the races couldn’t be easier. Our experience and knowledge across a wide range of sports, as well as travel logistics, allows us to offer exceptional service to racegoers, as well as The Jockey Club itself.”The agreement also provides Thomson Sport with a package of other rights including the use of The Jockey Club brandmarks; the category designation 'Official Travel Partner of The Jockey Club'; branding slots to promote Thomson Sport, online links via websites throughout The Jockey Club group, including the new www.thejockeyclub.co.uk; and promotion in The Jockey Club’s marketing and communications materials.Thomson Sport was recently appointed Licensed Tour Operator for UEFA EURO 2012. The company is also Official Travel Partner of the NFL in the UK, Official European Fan Travel Partner of the NBA, Official Overseas Travel Provider for englandfans and Official Travel Partner of the Scottish Football Association and Scotland Supporters’ Club.Thomson Sport joins Jaguar as an Official Partner of The Jockey Club.-ends-About The Jockey Club The Jockey Club is at the heart of racing in Great Britain as the largest commercial group in the sport. Its interests include:• Jockey Club Racecourses: Runs a diversified portfolio of 14 racecourses in Great Britain: Aintree, Carlisle, Cheltenham, Epsom Downs, Exeter, Haydock Park, Huntingdon, Kempton Park, Market Rasen, Newmarket, Nottingham, Sandown Park, Warwick and Wincanton.The group stages four of the five 'Classics' of Flat racing (the Derby and the Oaks at Epsom Downs and the 1,000 Guineas and 2,000 Guineas at Newmarket), as well as the Cheltenham Festival and the Grand National at Aintree.• Jockey Club Estates: The property and land management company responsible for the management and administration of more than 5,000 acres of land in and around the racing training centres of Newmarket and Lambourn, as well as an extensive property portfolio, including the Jockey Club Rooms.• The National Stud: Transferred from Government to The Jockey Club in 2008, The National Stud is a commercial thoroughbred breeding enterprise with a commitment to provide training and educational programmes.• Racing Welfare: A racing charity and company limited by guarantee with The Jockey Club being the sole member. The principal objective of Racing Welfare is to provide help to those in need who work or have worked in the thoroughbred industry, and their dependants.In accordance with its objectives in the Royal Charter, The Jockey Club reinvests its profits in British racing and promotes measures to sustain and enhance the long-term success of the sport. For more information, please visit www.thejockeyclub.co.uk.About Thomson SportTUI Travel's Sport Division is part of the Specialist & Activity Sector of TUI Travel PLC. The Sport Division, which includes Thomson Sport, is a unique collection of some of the most established sports travel & event brands in the world. The division specialises in delivering exceptional services and logistics to major worldwide sporting events for fans, teams, clubs and sponsors. Appointments include official Travel Agent for Rugby World Cup 2011, British & Irish Lions Tours, Ashes Series, ICC Cricket World Cup, ICC World Twenty20, ICC Official Tour Provider, Rugby World Cup Sevens, Hong Kong Sevens, Participating Tour Operator for the 2010 FIFA World Cup, Official Overseas Travel Provider for englandfans, The FA's official supporters club and Travel Provider for UEFA Under 21 Championships 2009, Wimbledon Championship and The British Grand Prix. Companies in the portfolio include www.gulliverstravel.co.uk, www.thomsonsport.com, www.sportsworld.co.uk, www.eventsinternational.co.uk, www.sportabroad.co.uk, www.thefanatics.com, www.williment.co.nz and www.astsports.com.au.Scott Bowers, Group Director of Communications, The Jockey Club, on 07809 665 840 or email scott.bowers@thejockeyclub.co.ukLucy Flew, PR Executive, Thomson Sport, on 020 8971 2968 or email lucy.flew@tuiactivitypr.com Tuition House 27-37 St George's Road Wimbledon London, SW19 4EU

08-01-2011 | Leisure, Entertainment, Miscel …
Thomson Sport
Bucs Sort Out Wem-Bear-ly Date
It’s the news that NFL fans across the world have been waiting for – American football is back! The new Collective Bargaining Agreement between the players and owners not only finalises the 2011/2012 schedule, meaning fans can start booking their trips to the States, but also guarantees that Wembley will stage its fifth regular-season game in October. The Tampa Bay Buccaneers and the Chicago Bears, both previous Super Bowl winners, will head
06-28-2011 | Sports
Thomson Sport
Thomson Sport Gets Fanatical About Bikes And Joins Forces With A Promising Young …
Less than a month after announcing its first ever cycling trip with Olympic gold medallist Geraint Thomas, Thomson Sport is proud to announce its newest ambassador - Ben Swift. Born in Rotherham and based in the Isle of Man, the 23-year-old has gone from strength-to-strength since breaking into the professional cycling ranks in 2009. After a short stint with the Russian Katusha team, Ben is now an enthusiastic member of Team
06-02-2011 | Sports
Thomson Sport
Olympic Gold Medallist To Host Thomson Sport Unique Cycling Experience
Cycling enthusiasts are being given the opportunity of a lifetime as Thomson Sport joins forces with gold medallist, Geraint Thomas, for a three-day trip in Belgium. Following Geraint’s impressive win at the Bayern Rundfahrt over the Bank Holiday Weekend and less than a month after The Tour de France, where the 25-year-old hopes to make a big impression, Geraint will be hitting the cobbled lanes of Belgium giving cyclists the opportunity
04-20-2011 | Sports
Thomson Sport
Be The First To Get Tickets To The 2011 NBA Playoffs And Finals With Thomson Spo …
The 2011 NBA Playoffs are upon us and fans are preparing to snatch seats for the ultimate basketball experience that sees the best teams in the NBA battle it out for a place in the NBA Finals than begin on June 2. Following the success of ‘NBA Games – London 2011 presented by Thomson Sport’ which saw the New Jersey Nets play the Toronto Raptors in the first-ever NBA regular-season games

10-19-2020 | Health & Medicine
myriamed GmbH
myriamed supports local soccer club
myriamed supports the local soccer club SV Puma with a small donation to help them buy new sportswear. We hope that the COVID-19 pandemic will be over soon and team sports can take place again. About myriamed: myriamed has unique expertise in research and development of human induced pluripotent stem cells (iPSC), including genome edited lines, and in the controlling of their fate as to the differentiation into defined cellular lineages
01-02-2018 | Sports
Golf Clubs
Global and Japan Golf Clubs Market By Club Classification - Wood Club, Irons Clu …
Researchmoz added Most up-to-date research on "Global and Japan Golf Clubs Market By Club Classification - Wood Club, Irons Club, Wedge Club, Putt Club and Other (Iron Wood Club, Pole Club)" to its huge collection of research reports. The global Golf Clubs market is valued at XX million USD in 2016 and is expected to reach XX million USD by the end of 2017, growing at a CAGR of XX% between
09-21-2016 | Business, Economy, Finances, B …
The Binary Trading Club is Open to new Members
Binary Trading Club
The Binary Trading Club is now open to new members. For a limited time period only, investors who have an interest in Binary Options and Forex trading can apply to become a member of their exclusive community. In order to become a member of the Binary Trading Club, one has to visit their website and fill out their form with the relevant information. Once complete, you will be contacted by someone
05-23-2016 | Fashion, Lifestyle, Trends
The Waters AL
Kids’ Club at The Waters
Location : 3 Crescent Park, Pike Road, AL 36064, Contact No. 334.272.3200 Date : Friday, May 27th at Noon The Water is organized the Kids’ Club at The Waters event. This is good information for kids because School's almost out, have you become your summer plans? See your calendars and mark them – We have got a number of amazing Blue Heron Pool club & Lucas Point Pool event organized
09-20-2013 | Leisure, Entertainment, Miscel …
Camp Pa-Qua-Tuck
Moriches Rotary Club Hosts Oktoberfest
(Center Moriches, NY) — The Rotary Club of the Moriches is hosting its annual Oktoberfest on September 27-29 at Camp Pa-Qua-Tuck, located on Chet Swezey Road. The times for Oktoberfest are as follows: September 27, 6 p.m. to 11 p.m. September 28, noon to 11 p.m. September 29, noon to 9 p.m. The three-day event will include German food, beer gardens, a carnival, vendors, live German entertainment and more. Admission is
08-29-2013 | Leisure, Entertainment, Miscel …
Press Club Hanoi
Press Club Cooks German Favorites
HANOI, Vietnam -- Full-bodied flavours, free beers and friendly meet-ups are all part of an early Oktoberfest celebration the Press Club has planned for September. From Sept. 23 to 29, the Press Club is inviting diners in Hanoi to a ‘Flavors of Germany’ showcase, with German specialties served right in the heart of the Vietnamese capital. Throughout the week, chefs will be tossing sausage salad with mustard seed dressing, roasting sauerbraten,
Comments about openPR
OpenPR ist the nicest and most clearly laid out PR platform I have seen to this day. The press releases are displayed very nicely and clearly and without any unnecessary frills. The updates are fast and the finished release looks appealing and is clearly legible. Even with 16 years of experience one discovers new things from time to time. Congratulations!
Gabriele Ketterl, Director Marketing & PR, Menads