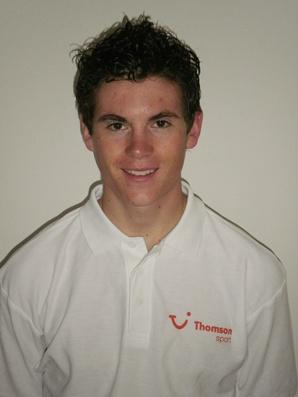 Less than a month after announcing its first ever cycling trip with Olympic gold medallist Geraint Thomas, Thomson Sport is proud to announce its newest ambassador - Ben Swift.Born in Rotherham and based in the Isle of Man, the 23-year-old has gone from strength-to-strength since breaking into the professional cycling ranks in 2009. After a short stint with the Russian Katusha team, Ben is now an enthusiastic member of Team Sky. Ben recently announced he will be cycling in his first ever Tour de France. “It is great to have Ben on-board as an ambassador for Thomson Sport. He is a brilliant role model and a genuinely lovely guy who we hope will give a boost to our new cycling ventures - it is such a great discipline to get involved in,” said Clare Last, Operations Manager for Thomson Sport.Ben, who has just launched his own website www.benswiftcycling.com, began cycling when he was just three and started BMX racing before turning his hand to all disciplines of the sport. Ben won his first international race in 1997 and has kept improving as he has represented Great Britain in the 2008 Olympic Games road race and finished fourth at the under 23s category of the UCI Road World Championships. Ben has also ranked third overall at the Tour Down Under and had wins at the Tour of Picardie, Tour of Britain, Tour of California, Tour de Romandie and the Vuelta a Castilla y Leon.With five wins under his belt already this year, Ben is now looking ahead to the Great Britain championships which were dominated by Team Sky in 2010.“It’s my third year of professional cycling now and, although I have the support from my team, it is a great feeling to know that I have the backing of a company like Thomson Sport. I obviously want to promote cycling as much as I can so I hope I can do this more in my role as an ambassador,” said Ben.Packages to watch Ben, Geraint Thomas and the rest of the team battle it out at the Tour de France are available through Thomson Sport. VIP Hospitality packages start from £199pp including Grandstand seats in the ‘Grand Palais’, refreshments throughout the afternoon and a Tour de France gift.Thomson Sport is also currently offering cycling fans the chance to go on a three-day ride with Geraint Thomas in Belgium taking in the tracks of the Tour of Flanders. Generally considered one of the world’s hardest single day races, the Tour of Flanders (known as the Ronde van Vlaanderen) is one of the five cycling ‘monuments’ and has a rich history spanning almost a century. Riders will experience the atmosphere and history of the Flanders region and follow in the tyre tracks of many cycling icons whilst taking in famous places such as the Koppenberg, Oude Kwaremont and the legendary Muur-Kapelmuur. Other highlights include a guided tour through the Centrum Ronde van Vlaanderen (CRVV) by cycling legend Freddy Maetens, an exclusive Q and A session with Geraint and a professional photographer on hand to document the experience. Based at a luxury 4* hotel in Kortrijk, Belgium (17th – 20th August 2011), the steam bath, sauna, Jacuzzi and solarium will help to ease any muscle tension at the end of the day’s cycling. Packages start from £869pp.For more information call Thomson Sport on 0845 121 2018 or visit www.thomsonsport.com- Ends -27th June 2011Note to Editors: TUI Travel’s Sport Division is part of the Specialist & Activity Sector of TUI Travel PLC. The Sport Division, which includes Thomson Sport, is a unique collection of some of the most established sports travel & event brands in the world. The division specializes in delivering exceptional services and logistics to major worldwide sporting events for fans, teams, clubs and sponsors. Appointments include official Travel Agent for Rugby World Cup 2011, British & Irish Lions Tours, Ashes Series, ICC Cricket World Cup, ICC World Twenty20, ICC Official Tour Provider, Rugby World Cup Sevens, Hong Kong Sevens, Participating Tour Operator for the 2010 FIFA World Cup™, Official Overseas Travel Provider for englandfans, The FA’s official supporters club and Travel Provider for UEFA Under 21 Championships 2009, Wimbledon Championship and The British Grand Prix. Companies in the portfolio include www.gulliverstravel.co.uk, www.thomsonsport.com, www.sportsworld.co.uk, www.eventsinternational.co.uk, www.sportabroad.co.uk, www.thefanatics.com, www.williment.co.nz and www.astsports.com.au.For Further Information Please Contact: Lucy Flew, PR Executive Tel: 07960 021719 or 020 8971 2968 Email: lucy.flew@tuiactivitypr.com TUI Travel Sport – London Office Tuition House 27-37 St George's Road London SW19 4EU

11-29-2011 | Leisure, Entertainment, Miscel …
Thomson Sport
Thomson Sport unveiled as The Jockey Club’s Official Travel Partner
Racegoers to benefit from bespoke travel packages through the new deal The Jockey Club, the largest commercial group in British horseracing, today announced a three-year agreement for leading travel provider Thomson Sport to become its Official Travel Partner. The new partnership will see Thomson Sport develop travel packages for some of the most popular racing fixtures staged at The Jockey Club's 14-strong portfolio of racecourses, including the John Smith's Grand National Meeting
08-01-2011 | Leisure, Entertainment, Miscel …
Thomson Sport
Bucs Sort Out Wem-Bear-ly Date
It’s the news that NFL fans across the world have been waiting for – American football is back! The new Collective Bargaining Agreement between the players and owners not only finalises the 2011/2012 schedule, meaning fans can start booking their trips to the States, but also guarantees that Wembley will stage its fifth regular-season game in October. The Tampa Bay Buccaneers and the Chicago Bears, both previous Super Bowl winners, will head
06-02-2011 | Sports
Thomson Sport
Olympic Gold Medallist To Host Thomson Sport Unique Cycling Experience
Cycling enthusiasts are being given the opportunity of a lifetime as Thomson Sport joins forces with gold medallist, Geraint Thomas, for a three-day trip in Belgium. Following Geraint’s impressive win at the Bayern Rundfahrt over the Bank Holiday Weekend and less than a month after The Tour de France, where the 25-year-old hopes to make a big impression, Geraint will be hitting the cobbled lanes of Belgium giving cyclists the opportunity
04-20-2011 | Sports
Thomson Sport
Be The First To Get Tickets To The 2011 NBA Playoffs And Finals With Thomson Spo …
The 2011 NBA Playoffs are upon us and fans are preparing to snatch seats for the ultimate basketball experience that sees the best teams in the NBA battle it out for a place in the NBA Finals than begin on June 2. Following the success of ‘NBA Games – London 2011 presented by Thomson Sport’ which saw the New Jersey Nets play the Toronto Raptors in the first-ever NBA regular-season games