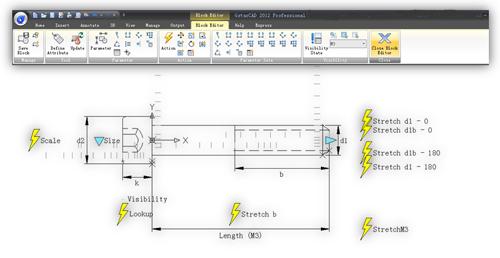 Beijing, China: November 25, 2011 -- Gstarsoft, a leading 2D/3D CAD software provider, today unveiled details about its new GstarCAD 2012 computer-aided design system. Based on mature GRX technology, GstarCAD 2012 is a significant leap ahead in areas of operational stability and performance. Customers will appreciate the exceptional new features, such as dynamic blocks, 3D lofting, polyline Booleans, and object hide/isolate. These highlight the design-oriented nature of GstarCAD 2012, thereby bringing more convenience and greater flexibility to 2D drawing and 3D design.In addition, the company announced that the new software is freely available as a no-charge download to any CAD user interested in testing the beta version.Exciting New Functions The highlight of GstarCAD 2012 is the new block editor environment. The BEdit command allows users to create and edit dynamic blocks. When placed in drawings, dynamic blocks are easily modified to be longer or shorter, or look completely different.Other practical functions in GstarCAD 2012 include the ability to attach DWF files as underlays, and to spell-check drawings in eight languages. New commands in this release include Superhatch, block attribute manager, object hide/isolate, and 3D loft. These functions make it more convenient for users to complete designs, and to maintain a high level of compatibility with the latest versions of AutoCAD.Unique Design-oriented Plug-ins Another group of new functions is unique to GstarCAD, and so is available only with this release. These include Boolean operations on polylines, CAD sheet to Excel sheet conversion, incremental text copy, on-line text, and extra commands for working with layers. These exceptional tools were developed for the needs of customers in industries as varied as manufacturing and AEC (architecture, engineering, construction). Unlike the general functions found in other CAD systems, these tools offer a more practical approach, are design-oriented, and are available only with GstarCAD 2012.Functional EnhancementsThere are dozens of other enhancements in GstarCAD 2012, such as the remarkable improvement in performance of drawings with large, high resolution raster images, along with improvements to plotting, 3D hide and shade visualization, hyperlink settings, and system memory control. All these enhancements make GstarCAD 2012 a better platform for designing and drawing.Improved APIsThe highlight in this release for APIs (application programming interface) is the addition of the IDE (integrated development environment) for LISP. The new IDE makes it more convenient to program and debug LISP code. In addition, a number of VBA functions have been rewritten and optimized in GstarCAD 2012.Stability and Performance More than 500 improvements and bug fixes have been integrated into GstarCAD 2012, making it the most stable version since Gstarsoft first introduced its GRX technology. By continuously optimizing the GRX core, GstarCAD 2012 improves its performance in processing design data, as compared to previous versions.Beta Availability The pre-release English version of GstarCAD2012 Pro is available now as a 30-day trial, and can be downloaded free from www.staricad.net/docts/GstarCAD2012Pro_ENG_Beta.exe. Gstarsoft anticipates shipping GtartCAD 2012 in December 25th, 2011.About GstarCAD GstarCAD is fast, powerful, .dwg-compatible CAD software for the AEC, mechanical, manufacturing, electrical, GIS, civil, survey and mapping industries. The world-class 2D/3D CAD software platform is based on IntelliCAD technology. GstarCAD's powerful functions, .dwg-compatibility, and programming platform are built on a cost-effective solution with an easy-to-use user interface. Gstarsoft ensures that your design inspiration comes true.Contact Information Suzhou Gstarsoft Co., Ltd No.1355, Jinjihu Avenue, Suzhou Industrial Park, Jiangsu, 215021, China Phone +86 512 62870220 Fax +86 512 62528938Beijing Branch Room 305, Block A, Kejicaifu Center, NO.8, XueQing Road, Haidian District, Beijing, 100085, China Phone +86 10 82736615Web en.gstarcad.com Email sales@gstarcad.net Tech support@gstarcad.net

03-06-2013 | IT, New Media & Software
GstarCAD
Express Tools of GstarCAD 2012Extended Version—Align Tool
Recently, Gstarsoft released GstarCAD2012 Extended Version; a lot of practical tools were added into the Extended version, Align Tool is one of them. If the drawing was not located precisely, the Align Tool is the best choice for the entities alignment. Simplicity, practical and fast are the features of Align Tool, the tool can align all kinds of entities in CAD drawings, such as: rectangle, circle, line, spline, arc, pline, block
03-01-2013 | IT, New Media & Software
GstarCAD
Express Tools of GstarCAD 2012 Extended Version - Arrange Tool
In the CAD design, designers always need to arrange the locations of objects. Occasionally, they have to locate the objects manually. Although it is an easy way, when designers need to arrange huge amount objects, it will be complicated and easy lead to errors. For this purpose, GstarCAD2012 Extended provides an Arrange Tool to solve the arrangement problems perfectly. This tool can arrange multiple objects according to specific row spacing or/and
02-07-2013 | IT, New Media & Software
GstarCAD
Express Tools of GstarCAD2012 Extended Version - Batpurge
During the CAD software designing process, as the size of drawings growing larger and larger, the performance would be slow down. Generally speaking, the emerging of redundant data often causes this kind of problem; the data will enlarge the size of the drawings, and slow down the response speed of software. So, experienced designers usually purge the drawings. To purge drawings, traditional method is to open each drawing and purge them
01-31-2013 | IT, New Media & Software
GstarCAD
Summary of New Express Tools of GstarCAD2012 Extended Version
Recently, the world leading CAD software developer – Gstarsoft released GstarCAD2012 Extended version to meet the requirements of users, the performance and functionalities are improved a lot, all these improvements have enhanced the application advantages of GstarCAD2012. To the new software, the most concerned issues are the new added functions. What kinds of new functions have been added into GstarCAD2012 EX? Let’s do a brief introduction: 1. Object Placement Among CAD software, designers